The association of fair skin with beauty is ingrained in Indian society for thousands of years. People want what they want 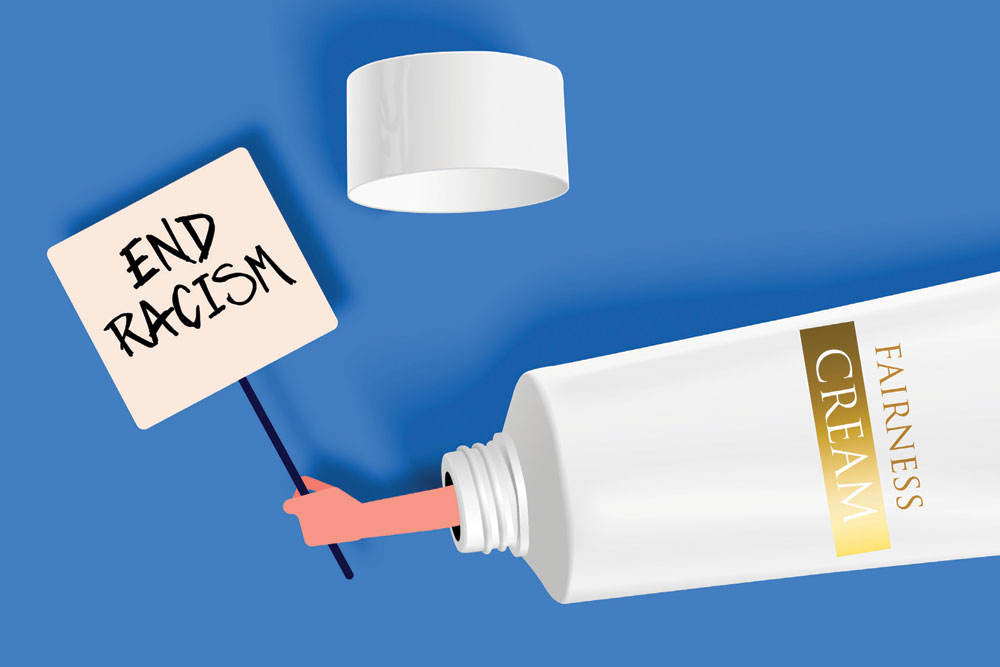 
IT IS CURIOUS to see how virtues change in unforeseen ways. What was once an aspiration turns into a social evil and actions once thought to be progressive, become just one more cog in the machinery that sustained the iniquity. What would be
going through the mind of Shah Rukh Khan now as the anti-racism agitation in the US zooms in on fairness creams?

In the late-2000s, when Shah Rukh Khan first started endorsing fairness creams, the public were being fed a phenomenon called the metrosexual; courageous men who went beyond the rigidities of gender to do things thought to be the domain of women. Men could traditionally aspire to be handsome but not beautiful (the reason you never read about the tall, fair and handsome man). What could be a more appropriate symbol to upturn this and earn a lot of money in the process than to get a male star to endorse fairness creams. Or so some brand manager thought. Those who nitpicked against Khan then were a microscopic community of feminists who found no resonance. For the rest, Khan endorsing a fairness cream was him endorsing femininity itself. And now the murder of a black man in distant America has turned fairness creams into a symbol of racism.

That microscopic feminist objection to Shah Rukh’s endorsement had even earlier turned mainstream on the back of social media as the years dragged on. He was now among a list of actors stereotyping beauty as anti-dark in return for money. These actors and actresses became, in Twitter imagination and allegation, endorsers of racism. And the final imprint of this was the manufacturing companies themselves conceding it about their product. This week, Unilever, which introduced Fair & Lovely in India in the mid-1970s, said it would drop the word ‘Fair’ from the name. In a press release, they called it the evolution of their skin care portfolio ‘to a more inclusive vision of beauty which includes the removal of the words ‘fair/fairness’, ‘white/whitening’ and ‘light/lightening’ from its products’ packs and communication. As part of this decision, the Fair & Lovely brand name will be changed in the next few months.’ The release quoted Sunny Jain, the company’s President, Beauty & Personal Care, saying, ‘We are fully committed to having a global portfolio of skin care brands that is inclusive and cares for all skin tones, celebrating greater diversity of beauty. We recognise that the use of the words ‘fair’, ‘white’ and ‘light’ suggest a singular ideal of beauty that we don’t think is right, and we want to address this. As we’re evolving the way that we communicate the skin benefits of our products that deliver radiant and even tone skin, it’s also important to change the language we use.’

A few days before Unilever took this decision, Johnson & Johnson, one of its multinational competitors, had announced that it was getting out of these products. A Reuters report on this said: ‘Johnson & Johnson will stop selling its Clean & Clear Fairness line of products, sold in India, a spokeswoman told Reuters. It was reported earlier this month that it would drop its Neutrogena Fine Fairness line, available in Asia and the Middle East. “Conversations over the past few weeks highlighted that some product names or claims on our dark spot reducer products represent fairness or white as better than your own unique skin tone,” Johnson & Johnson said. “This was never our intention—healthy skin is beautiful skin.”’

It is an open question whether any of this would have happened if the agitation against racism had not been in the US, which is the biggest market for these companies even if their skin-whitening creams are mainly targeted at Asia. Or if the agitation had not exploded in such magnitude and extremism, in which anything remotely perceived as anti-black would be construed as racist. Otherwise, the colourism allegation has been going on for a long time but it had never been a commercial threat to the entire company.

The Black Lives Matter movement changed that. It also demanded affirmation of support from the corporate sector, which the manufacturers of whitening products found led them to a tricky area. As when Unilever put up an Instagram post in support of the anti-racism protests and drew a barrage of comments over their skin whitening cream.


A cultural bias in India will not be swept off by a movement against racism in the US. Also, political
correctness often has a short shelf life while the dynamic of commerce remains long after that

Similar predicaments arose for its endorsers. Like Priyanka Chopra, who too put up a similar Instagram post and got the same questions directed at her. It had already become unfashionable to endorse them with even people in their own fraternity, like Abhay Deol, calling them out.

The history of fairness cream endorsements in recent years is a history of apologetic interviews and getting in line with political correctness.

Five years ago, Chopra told journalist Barkha Dutt that she endorsed such creams for a year but then stopped because she felt bad about it. Shah Rukh himself in an interview to The Guardian sought to explain it away. To a question on this, the article said: ‘What follows is a three-part justification: Khan says it is legal, that he would never endorse women doing it, that he would never use the product himself. Hang on, what? “I told them I’m not going to wash my face with it because I don’t do it, I don’t like it. They told me it’s a cream for men to clear up oil and dust, and at the end of the day you’ll get the beautiful girl. I can tell you now, no cream is ever going to get you beautiful girls unless you are beautiful with women. Guys, if you think you’re going to get women because of this cream, sorry. You’re not. I know they might not extend the ads now and I won’t do it, but I’m not selling fairness being better, I cannot sell beauty.”’

Even Sushant Singh Rajput, after his recent death, was being eulogised for having refused to endorse fairness creams.

Is this the end of fairness creams? Probably not. So long as there is demand, there will be supply. The association of fair skin with beauty is ingrained in Indian society for thousands of years. People want what they want. A cultural bias in India will not be swept off by a movement against racism in the US. Also, political correctness often has a short shelf life while the dynamic of commerce remains long after that.

Consumers might not express their desire for fairness openly if there is sufficient social pressure but it doesn’t take too long for businesses and entrepreneurs to figure out the market. Unilever, for instance, has changed the word branding from ‘fair’ to ‘radiant’ skin. All it requires then is for consumers to read the code and think of radiance as fairness. Companies will tiptoe, but they will be catering to a market. Just as Bollywood itself, where, despite all its political correctness now, every single movie shoot’s make-up team exists to make actors and actresses as fair as possible.