The Welfare of Farewells 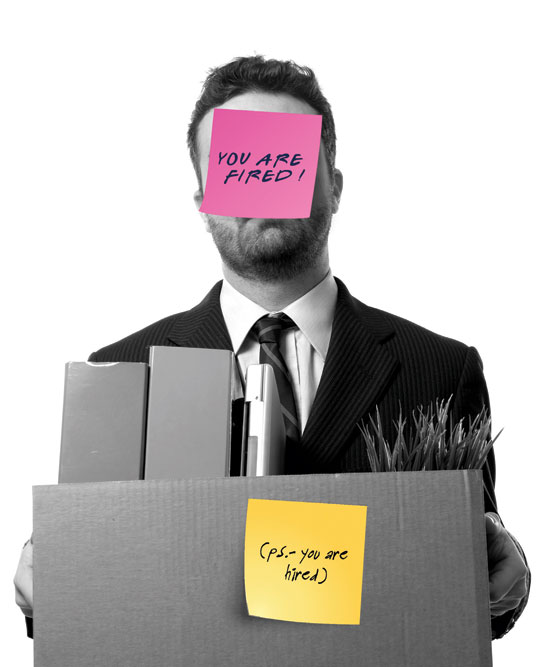 
IN 2017, AN audio clip surfaced on SoundCloud, an online media library, supposedly by a Tech Mahindra employee who got fired on a day’s notice—not only did it go viral but became a test case for brand reputation management in terms of how to sweeten the exit deal and not offend employees waiting at the departure lounge. In the clip, the human resource (HR) executive of the company is heard pinning the blame on the management for the abrupt decision of giving the pink slip to employees on short notice: “This is a corporate decision. If you read the offer letter carefully, there’s a clause that states—the company reserves the right to revoke your services at any moment by paying the basic salary. I can ask you to leave the company today end of day as per the conditions mentioned in the offer letter, which you duly accepted when you joined Tech Mahindra. Why did you sign the offer letter if you were not in agreement with the termination clause that was clearly mentioned in there?”

Be that as it may, exits need to be handled with kid gloves at a time when mass layoffs owing to a downturn or mergers and acquisitions (M&As) or a change in business priorities are the order of the day and social media is the key to unlock any heartburn the impacted employee suffers. Joel Paul, General Manager—India, Randstad RiseSmart, considers the exit process akin to the induction of individuals in organisations. “It [induction] used to be very tedious 5-6 years ago and the new employee had to fill 16 forms, go for a medical check-up and there were many others waiting. But the whole process has changed today with people walking in on Day 1 and being greeted by executives over lunch with a table full of goodies laid out to welcome them.” Such largesse during the induction process is being witnessed while leaving companies too. “Earlier, it was easy to let go of employees but, today, companies are looking at the best ways to do so since they want them [laid-off workers] to say that the exits were handled well,” says Paul.

PAUL IS PART of a breed of outplacement managers who are being increasingly deployed by companies in case of mergers or cost-optimisation drives that push out a part of the workforce in the open job market. That’s when outplacement agencies, such as Randstad RiseSmart, Right Management and Adecco, assess redeployment opportunities of such people within the organisation, train managers to notify employees in case of layoffs, find alternative job opportunities for the impacted candidates and also take up the role of career coaches, often real-time beaming in advice 24/7 on their mobile devices. Several of these firms are part of large groups that also have recruitment businesses, which help in resumé seeding and landing job interviews.

It’s a bit like George Clooney’s character Ryan Bingham in the 2010 Hollywood Oscar nominee Up in the Air who works as a ‘transition consultant’ for an outplacement firm, living out of a suitcase—and oddly enough—taking on the onerous role of informing the affected employees that they have been ‘downsized’. Bingham is bad news because, as the voiceover narration points out, employers are ‘too cowardly’ to do it themselves.

Though the film was a hit and Paul still gets clients unfamiliar with the process who ask him, “Oh, like Up in the Air?”, it was a little over-the-top. For nowhere in the world do outplacement firms notify employees that their services are no longer required. They step in only after line managers inform the impacted workers.

When the outplacement bait was handed out to the 55-year-old Amit Bhramar, an HR professional in a large pharmaceutical company six months ago along with 300 employees following a merger, he decided not to go in for a regular job any more. “I’m in the last leg of my career [before retirement at 58] and it is only natural I should start an enterprise that’ll see me through,” says Bhramar. With a tinge of obvious pain, he adds, “I’ve been with this company for 20 years now.” After a pause, he admits that his priorities have changed and the outplacement agency has done well by coaching him for the new role. He eventually got together a few people from his professional network and floated an HR advisory firm for start-ups and mid-sized small and medium enterprises where he’s now doing reasonably well. But before he could get his act together, the transition coach helped him figure out how to market himself, outlined his target audience, honed his understanding of cash flows and eventually drew up a business plan.

Following a retrenchment, out-of-jobbers are psychometrically mapped to suit certain jobs they may be attuned to performing well. The outplacement firm identifies such jobs and links those with the candidates. “It is more of a
self-discovery process since a lot many people have blindspots and end up in jobs they are not passionate about,” says Prashant Pandey, Country Manager–India, Right Management.

Pandey would know. A year back, when Right Management was dealing with a 53-year-old head of sales of a reputed consumer company after he was shown the door owing to cost pressures, the psychometric test was applied to him and it was found that he was more of a solo warrior than an outgoing salesman. Pandey refuses to dub him an ‘introvert’. But his role in all of the 15 years he spent in the company demanded that he interact with dealers. “The test showed that networking was not his natural strength and so we advised him to look at other job families,” says Pandey. With little or no compromise in salary, the man is today a supply chain manager in a similar industry.

Pandey has seen such (outplacement) services being provided to even junior employees. “In the past, the focus was more on middle and senior levels,” he says. “In the last few months, at least two large organisations have engaged us for providing services to even blue-collar workers.”

In the quest for the right job, outplacement firms are even sharpening LinkedIn profiles and resumés of the impacted workers and connecting them to what they call the ‘hidden job market’, that sits with recruiters and are not advertised. Pandey says that almost 90 per cent of the layoffs are not performance-oriented but occur owing to business failures. This is when candidates are coached to be transparent about such exits instead of being defensive. “State the business reason upfront as there is no stigma any more and other companies are receptive to outplaced talent,” is Pandey’s advice.

The entire outplacement business in India may be valued at only $5 million today but it is growing at an outstanding clip of 40 per cent each year. Though multinational firms, in sync with their global policies, have been offering such services to their downsized staff for a while now, homegrown and family-owned businesses are slowly warming up to them. Again, the war for talent is real and Indian companies can fathom this more than they could 5-6 years ago. “If core Indian companies want to compete in today’s day and age, they need to evolve too and bring in the best possible talent,” says Paul.

Even when Pandey signed up with Right Management 10 years ago, 80 per cent of the demand for outplacement jobs came from the multinational companies, which is now just half of the business, the Indian conglomerates and family-owned businesses making up the other 50 per cent. And the latter is the reason his company’s compounded growth has spurred by 35 per cent annually over the last three years.

ALONGSIDE WHAT CAN’T be overlooked is the overall joblessness in the current economic environment, which is a telling marker of the gloom that sustains the business of hunting down job options for those who are displaced. India’s unemployment rate in October rose to 8.5 per cent, the highest level since August 2016, according to data released by the Centre for Monitoring Indian Economy. The data reveals that the urban unemployment rate stood at a crushing 8.9 per cent, and among states, unemployment in Tripura and Haryana soared to as much as 20 per cent in the same timeframe.

Marco Valsecchi, CEO of Adecco India, a top staffing firm, calls the business of outplacement anti-cyclical to the slowdown. He has seen his outplacement business grow 20 per cent over the last two years, and claims that the upper limit of finding a job for an impacted employee is six months. Today, he gets most of his business from the manufacturing and retail sectors, perhaps the worst hit in the downturn.

Valsecchi, an Italian, is quick to compare the labour scenario with Europe where strict labour laws compel companies to pay as much as two years’ salary to laid-off workers, sit down with the unions and chalk out a severance package and placement services. While in India, the traditional labour law operates wherein the impacted employee is just handed out the basic pay for a couple of months or more, depending on the contract. “There should be balance [between unions and companies],” is what Valsecchi advocates.

A year back, Adecco got a request from a bank to outplace some 300 workers owing to cost pressures. The agency followed due process and the more it discussed with both the parties—the bank and the candidates—it figured out that the latter could be trained and even redeployed within the same organisation in other functions. This is called inplacement and is considered a far better option than the body blow dealt by complete departure from a company where the worker could have spent a major part of his career. The bank took Adecco’s advice and eventually, the number of people being outplaced was halved, “even though the business of outplacement is far more profitable for us,” explains Valsecchi. In short, by placing half of its staffers it had decided to let go, the bank not only minimised damage to its reputation but also made good use of existing talent by retraining them for relevant roles.

However, inplacement remains a rare phenomenon as business calls are known to be ruthless. Take the case of Ravi Ahuja, a senior IT professional in his late-40s with two decades behind him. While he was an IT project head managing large teams, he came to a crossroads in his career when he was impacted three months back because of the slowdown. The moment it hit him, Ahuja started looking for similar roles in areas of his expertise. But as he was being coached by the outplacement agency, corollary skills were identified that opened up a world of avenues for him. This is when he tried his hand at coaching and eventually went ahead as a professionally accredited coach. Having worked all his life in the technical arena, it was a major shift in his career. Paul feels that people in general are diffident to go into the same industry that is impacted by the slowdown. “You could well become an entrepreneur because even the next competition will not be hiring,” he observes.

Whatever the choice, companies nowadays are steadfast that it shouldn’t go against the reputation of their brands. Earlier this year, when Randstad RiseSmart did its ‘Brave the Change’ survey sampling 1,000 individuals countrywide, it asked them what they felt was most important while joining an organisation. “Almost 99 per cent said the reputation of the company was most significant,” says Paul. Similarly, the Tech Mahindra episode, if managed well, could have had a more positive impact. Instead, the HR manager came out as being insensitive, leading to incessant tweets by the top leadership of the company apologising for their actions. During a slowdown when the business of outplacement surges, companies too are learning to tackle layoffs in a more responsible manner. 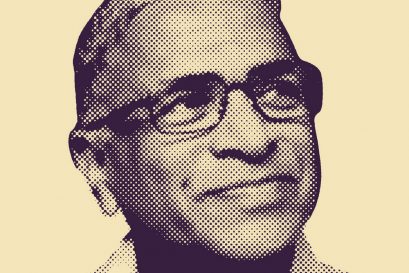