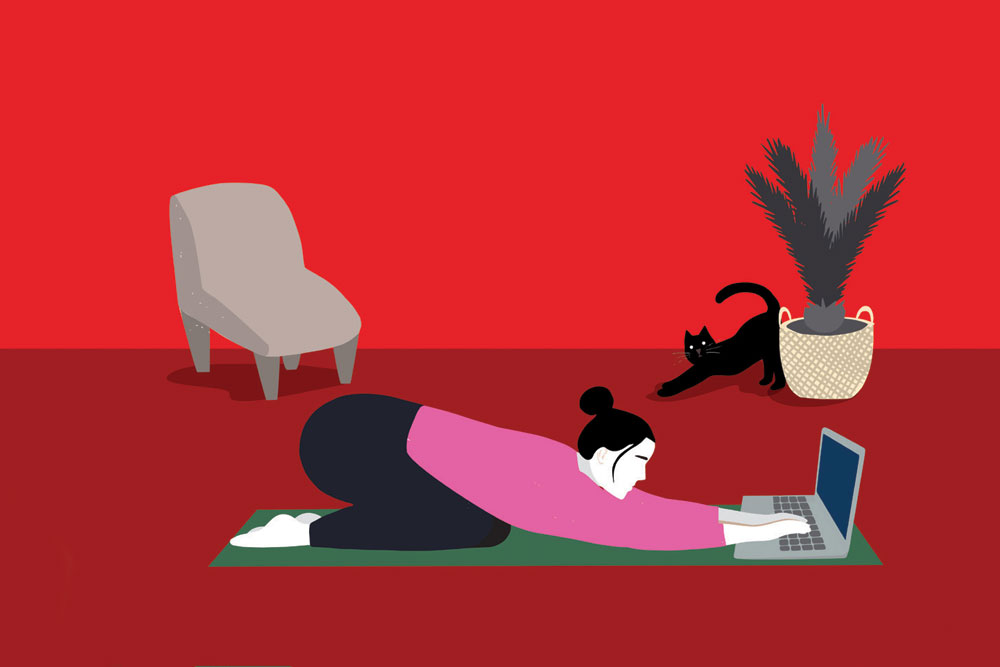 
IN THE CLASSIC Autobiography of a Yogi, Paramahansa Yogananda describes yoga as the perfect and appropriate method of fusing body and mind together so that they form a unity which is scarcely to be questioned.

And now, thanks to the isolation enforced upon us by the lockdown, yoga seems ready to transcend all physical restrictions, allowing its followers to tap into their inner yogis. Across India and the world, people are doing exactly that, signing up for virtual yoga classes that help them balance their mind and body. James Mallinson of the School of Oriental and African Studies believes if we see isolation as an opportunity to reflect and meditate, then we can recapture some of the original intent.

Virtual yoga is the 21st century’s shorthand answer to the stringent tapasya of the ancient ascetics, a perfect blend of technology and tradition. Thanks to the lockdown and the world discovering work from home, virtual yoga is kind to time zones too. Manish Poddar, trained in the Bihar School of Yoga and based in Delhi, reconnected with old students who had left India, and now has a thriving practice that doesn’t require him to commute. He not only saves two to three hours of travel a day but is also able to devote that time to going back to the basics and refining his practice. His students are scattered from Switzerland to Italy, from South Africa to France. “Yoga teaches you to be aware of yourself, of your body and soul. It allows you to live within your limitations, maintain your balance, and manage your breath and body,” he says.

The yogic lifestyle is best suited for this new normal. And its virtual accessibility has created quite a stir in the community of yoga teachers and learners. Ira Trivedi who runs a yoga studio, IraYoga Wellness, in Delhi, is now conducting her classes on Zoom, despite occasional technical problems. She believes it makes better yogis of everyone, allowing them to look deep within. She is using this opportunity to organise a Being Yoga festival online.

Initially, Mini Shastri was wary of taking her practice online. “I put some firm stipulations to invite only those whose practice I had supervised, as in my head, I knew each person’s limitations and strengths. We did a few trial sessions and surprisingly the response was positive. People jumped in, even those whom I had not seen in the yogashala for months because of logistical issues. Similarly with our breath and meditation sessions, more than the expected number jumped. Most are surprised, including me, at how well it has worked since there is no excuse not to attend.”

Bhavani Pinisetti, who runs a yoga practice called Laxmanayoga in Mumbai, believes the rise of virtual yoga is a blessing in disguise since it reaches millions of people across continents. She has been taking four classes a day and enjoying her work. Poddar believes teaching virtually has improved his skills. “It focuses you completely on the student and the practice, not just the physicality of it but also breathing and meditation.” Soukya, an Ayurvedic and wellness resort outside Bengaluru, is also conducting therapeutic yoga lessons on Zoom for its foreign clients. “I have seen great damage for the back by wrong posture, so we have made a video with an Ayurvedic yoga instructor who understands the clients’ health issues,” says Dr Isaac Mathai, founder of Soukya.

With India suggesting June 21st as International Yoga Day in 2015, and having it endorsed by the United Nations, the spiritual and psychological benefits of yoga have come into focus. It is no longer merely a form of exercise but an entire way of being. As Deepak Chopra has written, and propagated, yoga is a new way of looking at life that translates into a way of interacting with life. Mallinson, one of the premier scholars of kit and yoga in the world and perhaps the only baronet who wears dreadlocks, says the ultimate goal of both yogic paradigms—ascetic and Tantric—is liberation (moksha), which can be achieved while alive. Along the way various supernatural abilities or siddhis are said to arise, ranging from mundane benefits such as overcoming hunger and thirst through the power of flight to the attainment of an immortal body. In the ancient ascetic tradition, these siddhis are ultimately impediments to the final goal; in the Tantric tradition, they may be ends in themselves.

In a locked down world, these have become critical tools for survival.