Lower taxes mean more liquidity for the young and restless 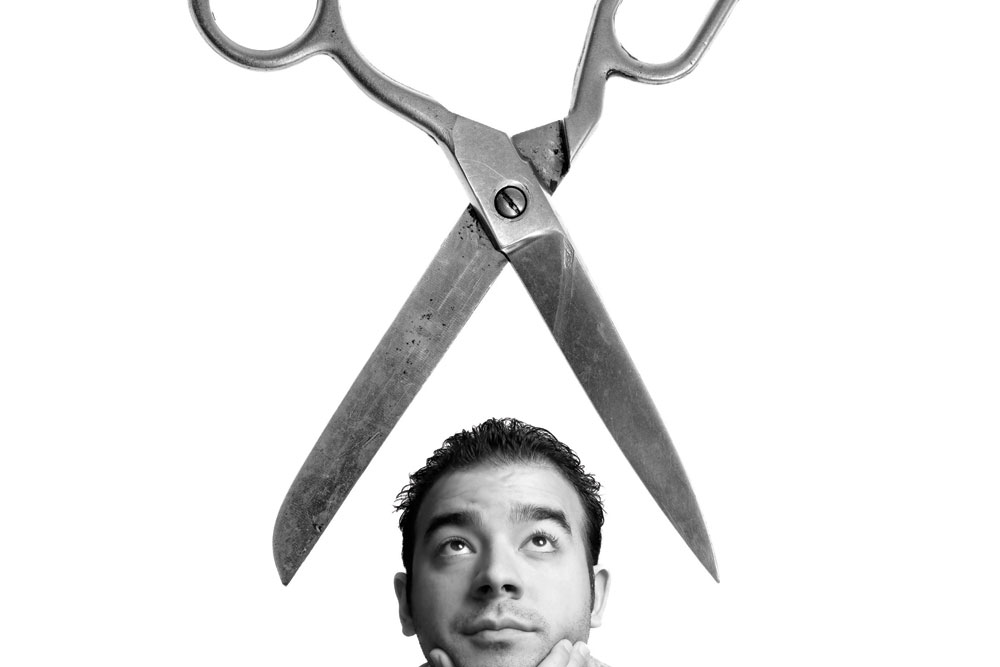 
WHEN DOMESTIC AUTO SALES TANKED by a record 23.55 per cent to 1,821,490 units in August 2019 compared to a year ago, Finance Minister Nirmala Sitharaman’s reaction birthed a shipload of trolls and memes. Back then, she had held that the preference for millennials to hail app-based transport (Uber, Ola, etcetera) was the chief culprit behind the south-bound trajectory of auto sales. So it was natural to appease the millennials, those born between the early 1980s and the first few years of the new millennium, also known as Generation Y, in Budget 2020-2021.

In the new tax regime, millennials make up a sizeable portion. For those in their first or second job and claiming minimal tax benefits on account of relatively lower provident fund (PF) deduction, the prospect of moving to the new regime seems enticing. They can now let go of lower eligible deductions as well as avoid the pressure of investing more to claim higher tax breaks. That could leave them with more money in hand and reduce paperwork considerably.

India is home to the world’s largest population of millennials. At 450 million, they are influencing the way India shops, eats, buys and commutes, much like their global peers. With additional money in the bag, they are expected to go on a buying spree at a time when consumption has hit rock bottom and a $5 trillion gross domestic product (GDP) looks like a pipe dream.

To gauge the situation, Open spoke to a few millennials. Gaurav Joshi, 24, a communications professional from Bengaluru, admits that the new regime would suit him as he’s always been a little “extravagant”. “The new tax regime would finally allow me to save some money and go on my first long foreign trip,” he says. But Bharat Virmani, 28, a marketing specialist with a New Delhi-based software firm, has decided to tread with caution. He earns between Rs 5 lakh and Rs 7.5 lakh and has mixed feelings about the new tax rates. “Initially, I used to go after NSC certificates to get tax rebates but then I started reading about equity-linked savings schemes [ELSS] and systematic investment plans [SIPs] and started investing in them. There I was a little constrained for choice because if you know you’re going to get a tax rebate from only a certain scheme, you’re more likely to invest in that scheme. I’m very happy with the new regime because it gives me the freedom to invest wherever I want to. I can choose an SIP, ELSS and probably an index fund to invest in. But my concern is that since I’ve got through to ISB [Indian School of Business] and in case the exemption on education loan is struck down next year, I will have to rethink. Since I avail of the education loan and need the tax break, the new regime is not necessarily the best option for me. Otherwise, I would have switched over since it would give me the freedom to park my funds. Besides, more liquidity would allow more leisure options, like travel.” 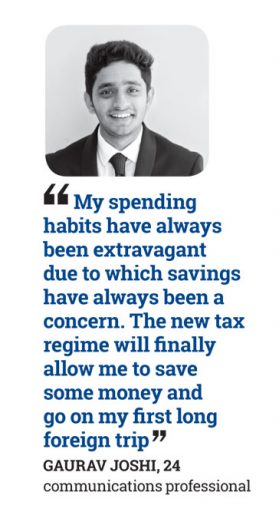 While Virmani is cautious about career planning, any wealth planner will tell you that many of Virmani’s tribe have been nudging their families to move from savings to investment instruments taking on the risk to buy equity-linked products as they give better returns and compound at a rate higher than the savings rate, which is at least able to beat inflation. And since house rent allowance (HRA) and home loan benefits, too, go out of the window in the new scheme, renting seems to be a far better option than owning a home. “Lowering of tax [for incomes till Rs 15 lakh a year], even without exemptions, if they opt for it, will not compel the millennials to keep several investment baskets open. They’ll have money in hand to use. This is going to drive consumerism,” says Nilesh Shah, Managing Director of Envision Capital, Mumbai.

Abhijeet Kundu, analyst at Antique Stock Broking, Mumbai, argues that most of the new regime beneficiaries would be those in the 24-28 age bracket. “They are the ones who would spend with more money in hand,” adding that since returning to the exemption-based system once you’ve switched over is not a choice in the new scheme of things, it’ll have lower traction. “If you can’t shift back to the old exemption-based system, there’ll be very few takers—10 per cent of the millennials is an ambitious number,” he reckons.

While one needs to wait and watch how millennials respond to the carrot the Finance Minister has dangled in front of them, it is no secret that lower tax rates increase the spending power of consumers and spike aggregate demand leading to higher economic growth. Given their aspirational lifestyle and the scarcity of good risk-neutral investment options, millennials may indeed spend more if there are tax savings under the new regime. Consider the case of a millennial drawing Rs 15 lakh a year with no savings and a tax outgo in the current regime of Rs 2,57,400.

Under the new regime, the tax payout stands at Rs 1.95 lakh. So he/she would get an additional disposable income of Rs 62,400. Now when this disposable income is spent, it would raise demand for various products and yield more indirect revenues for the government, thereby giving the much-needed boost to a sagging economy—India’s economy is forecast to grow only 5 per cent in the year ending March, its weakest pace in 11 years. It is hoped millennials will come to the rescue with that additional disposable
income, spending on travel and white goods, such as gadgets and electronic products. “Given the recent behaviour patterns, it is likely that millennials, who live by the day and prefer more cash in hand vis-à-vis savings [with tax benefits], may opt for the new regime with lower tax rates,” says Harpreet Singh, Partner, KPMG.

Companies and brands too are expecting the additional disposable income with millennials to trigger growth. Real estate player DLF has already invested Rs 100 crore on revamping a south Delhi mall spread across 520,000 square feet with co-working spaces and brands catering to Generation Y, who make up as much as 40 per cent of the footfalls in the mall. So apart from Under Armor, Superkicks, Go Sports, there’ll be others like Marks & Spencer and Uniqlo who are increasingly targeting that age bracket. Besides, the Budget has also proposed to defer tax deducted at source (TDS) or tax payment on shares allotted by startups to their employees under the employee stock option plans (ESOPs). “Both startup founders and employees are largely millennials and they stand to gain from this move as they will now have to pay tax not at the time of allotment of securities but at the time of exit from the company or selling the shares or after five years, whichever is earlier. This would definitely put more money in the pockets of this emerging consuming class and boost consumerism,” contends Lalit Malik, Chief Financial Officer of Dabur India. It will also help startups hire the best candidates and retain them, for longer periods.

Many in the startup world also believe that the Budget’s proposal to set up an investment clearance cell to offer end-to-end support will have a positive bearing on aspiring entrepreneurs. It is also proposed that entrepreneurial ventures with turnover up to Rs 100 crore, as opposed to the previous threshold of Rs 25 crore, may now avail 100 per cent profit deduction in three out of 10 years, instead of the previous limit of seven years. This will enable young entrepreneurs to take more risks and innovate.

Vivek Gupta, co-founder of Bengaluru-based online meat delivery Licious, though is still undecided about the new tax slabs. “While the tax slab revision puts more money in the hands of consumers, the current state of inflation will not allow a high realisation of the benefits. It is important that the Government take active measures towards controlling inflation to ensure that consumers can fully benefit from the increase in their disposable income,” he says.

Gupta’s fear echoes with financial planner Gaurav Mashruwala’s newfound apprehension. He believes that if millennials have more money in hand, they should be investing instead of “blowing it up”. He strictly holds that consumption at the expense of savings and long-term investment is a “crime”. “My recommendation to millennials is to stick to the old regime. In the new regime, most of the exemptions [70 of 100] have been taken off by the Government.”