The Identity Angle in Assam 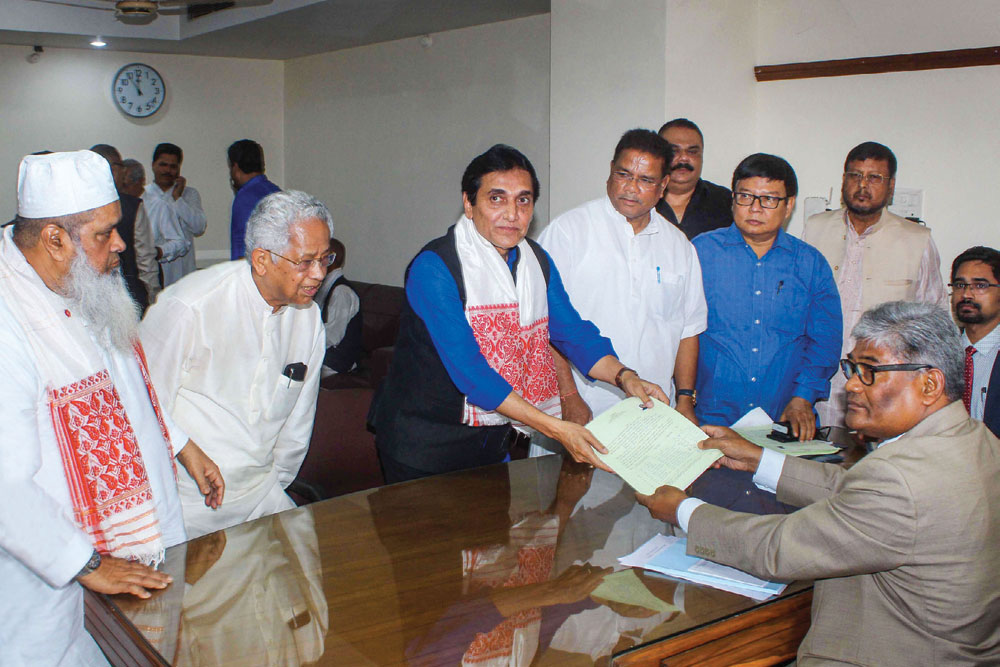 
IN LATE AUGUST, former Uttarakhand Chief Minister and the Congress’ pointperson for Assam, Harish Rawat, denied that the party was in talks for an alliance with the All India United Democratic Front (AIUDF), the regional party led by perfume baron Badruddin Ajmal.

In an interview to The Indian Express, Rawat said: “We are in talks with some social organisations that are fighting for Assam and Asamiat and are against the anti-Assam policies of the Centre and the Sarbananda Sonowal government. But there is no discussion on any form of alliance so far because forging alliance is neither in my jurisdiction nor that of the state Congress… There is nothing like [an alliance plan] as of now.”

Rawat was being economical with the truth. Earlier this year, the two parties jointly backed Ajit Kumar Bhuyan, a journalist who stood as an independent candidate for the Rajya Sabha from Assam. Bhuyan won in no small measure due to the cooperation between the Congress and the AIUDF. Then, just around that time (in March), the two parties decided to jointly contest elections for the Bodoland Territorial Council (BTC). It is another matter that the elections were stalled. Even earlier, during Lok Sabha elections last year, the AIUDF did not put up a candidate from Kaliabor, the constituency from where Gaurav Gogoi, son of former Chief Minister Tarun Gogoi, won. At that time, the expression used to describe the relation between the two parties was ‘tacit understanding’. Now it seems to have progressed further even if there is a certain allergy to the word ‘alliance’.

Elections in Assam are not due until April next year but the political scene in the state has already begun heating up. On the one hand are parties like the Congress and the AIUDF which are quietly trying to work out an electoral arrangement. On the other are regional outfits such as the All Assam Students Union (AASU) and the United Liberation Front of Asom (ULFA) and the Asom Gana Parishad (AGP) that are fighting to remain relevant. The party that remains silent is the one that controls the levers of power in Dispur: the BJP.

The sailing for the Congress in stitching an alliance with the AIUDF, however, is not smooth. There is a faction within the state Congress that feels such an alliance has the potential to backfire on it as the AIUDF is perceived to be a party that backs the interests of Bengali Muslim immigrants. In a polarised political environment, this can swell support for the BJP that, in any case, has not been damaged after nearly five years of rule. Even if an electoral calculation is made, observers feel the alliance is unlikely to secure power for the Congress in the 126-member legislative Assembly. For the AIUDF, however, an alliance with the Congress will bestow greater legitimacy on the party and it is not averse to such a tie-up.

In contrast to the feverish activity in other parties, the BJP is playing cool. After the bout of violence in Assam last year in the wake of the anti-Citizenship Amendment Act (CAA) protests, many in New Delhi and even Assam had ‘written off’ the party’s prospects. But the anti-CAA agitation in the state waned off as quickly as it had arisen. Even before the agitation had begun, in July last year, the Union Government had notified a 13-member committee to recommend steps to effectively implement Clause 6 of the Assam Accord of 1985. According to Clause 6, ‘Constitutional, legislative and administrative safeguards, as may be appropriate, shall be provided to protect, preserve and promote the cultural, social, linguistic identity and heritage of the Assamese people.’

On August 11th, members of the committee who belong to the AASU leaked the report. The report, among other steps, recommended amending Article 371B of the Constitution that deals with special provisions with respect to Assam; broadening the definition of ‘Assamese people’ to include the Assamese community over and above the Tribal communities in the state; reserving 80-100 per cent of seats in Parliament, the Assembly and local bodies for ‘Assamese people’ and changing the cutoff date for this purpose to January 1st, 1951. Interestingly, the National Register of Citizens (NRC) had March 24th, 1971 as the cutoff date for inclusion in the NRC. Perhaps the most notable recommendation made by the committee is about the prevention of land alienation from ‘Assamese people’ to non-Assamese. There is a comprehensive set of recommendations which, if implemented, can sort out the contentious politics of the state.


This year, in February, the Union Government also cleared the deck for a delimitation exercise to readjust parliamentary and legislative Assembly constituencies in Assam. When the last such exercise was carried out in 2008, Assam, along with Nagaland, Manipur and Arunachal Pradesh, had been excluded from that round of delimitation. Some preparatory work for this purpose, at the local level in Assam, has begun.

So far, the BJP has not reacted to the leak of the Clause 6 committee report. But if the recommendations are implemented, the party stands to reap electoral gains in the state. On paper, previous governments have taken steps to implement this clause. But anyone who cares to leaf through the pages on the website of the Assam Accord implementation department—hosted by the Assam government—can see that the steps have been homeopathic in nature. The most important steps—the ones that the Assamese consider essential for preserving their identity and way of life—have not just been kept in abeyance but have been subverted in many ways.

These demands—safeguarding Assamese identity and material interests—are not simple ones that political parties can assess and then implement fully or partially. The trade-offs pose difficult challenges. For the Congress, a proper implementation of these demands would have antagonised its Muslim constituents. For the BJP, which is perhaps in the best position to give what the Assamese want, there are challenges. Ideologically, the party is against ‘dividing’ the Hindu community along caste or ethnic lines and hence its reluctance to act against Bengali Hindus who migrated from Bangladesh. In Assam, the indigenous people have a different dividing line: Assamese versus Bangladeshi migrants. In a first-best world, all illegal migrants—Hindu or Muslim—would be thrown out. The frictions the BJP encounters in the state are due to these different perceptions of what needs to be done.

So far, the party seems to have managed these contradictions well. The date on which the report was leaked, August 11th, said something interesting about the AASU and its insecurity than the damage the leak could inflict on the BJP’s prospects. At the moment, there is intense speculation about what the BJP will do. It has been speculated that sometime before the election, the party may cut a deal with the ‘accord faction’ of the insurgent group ULFA. While the ULFA is now a spent force with its different factions trying to survive the rough and tumble of Assam politics, it retains a degree of influence in Upper Assam. The support base of the ULFA and the AASU overlap to an extent and any deal to ‘rehabilitate’ the former weakens the latter as a political force.

In any other state, such organisations are peripheral to mainstream party politics where the contest is usually between two or, at most, three parties. But in Assam—a state that has seen insurgency, insecurities over the identity of its original inhabitants and a history of letdowns at the hand of mainstream parties—this is not the case. Organisations like the AASU are like ‘wheels within wheels’ of state politics, however small their cogs may be. The idea is that even if outfits like the AASU and the ULFA get three or four seats in the Assembly, they can act as a pressure group on ‘national’ parties to deliver on their promises. Thus the desire among a significant fraction of the state’s residents not to see the AASU’s demise. In practical terms, this does not pose an electoral challenge for the BJP but the party needs to watch Upper Assam, especially the southern bank area of the Brahmaputra. In these rural areas, there is always a residual challenge.

The degree of the BJP’s confidence can be gauged from another decision the party took earlier in the year. The BJP is in alliance with the Bodoland People’s Front (BPF) in Parliament, the state Assembly and at the local level in the BTC, the local council that partially governs four districts of Assam where the Bodo people are in a majority. In the council elections that were due in early April, the BJP had decided to go it alone and contest all 40 seats. The Congress and the AIUDF had earlier decided to jointly contest 20 of the 40 seats in the BTC, with the Congress contesting 13 and the AIUDF seven. Then, as the coronavirus pandemic gathered pace, these elections were postponed indefinitely and the administration of the council was taken over by the governor of Assam.

There is a faction within the state Congress that feels an alliance has the potential to backfire on it as the AIUDF is perceived to be a party that backs the interests of Bengali Muslim immigrants. In a polarised political environment, this can swell support for the BJP that, in any case, has not been damaged after nearly five years of rule

The BJP’s calculation in this area—where it does not have a mass base—is simple: it wants to test the waters and its local cadre is confident of winning seats. Then there is the multi-cornered contest, whenever elections are held, that will only help it. The politics of the Bodo region is complicated. The BPF has different factions as does the insurgent group the National Democratic Front of Bodoland (NDFB) with its different factions promising support to different wings of the BPF. If one looks at the BPF’s record, it tends to support any party that has power at the Centre and in the state. As long as the BJP retains power, the ghar wapsi of these bickering groups is a foregone conclusion.

When the BJP wrested Assam from the Congress in 2016, the party was in serious decline not only in national politics but also in Guwahati. The tightrope act, perfected by successive Chief Ministers from Hiteswar Saikia onward, had run its course. The ‘demographic damage’ inflicted on the state was beyond repair and there was no sign that repair was even contemplated. For the BJP, the state was alien territory, a land where religious identity was overshadowed by linguistic and ethnic concerns. That it could gain power in Guwahati was in no small measure due to its organisational prowess. But what also mattered was the realisation on the part of the people of the state that, in the world, only second-best solutions are available, not the best ones. Ideologically, retaining power in Assam is vital for the BJP and its project to ‘mainstream’ Northeast India. It is sure to put in political energy where it matters.