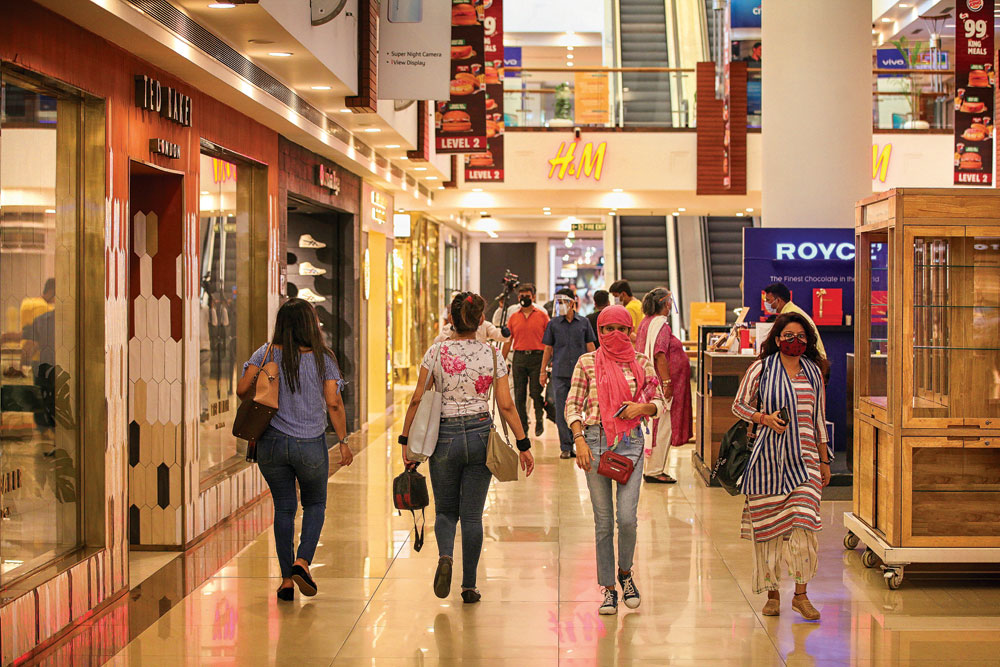 
THERE WAS SOMETHING surreal about the resolution of a traders’ body from Uttar Pradesh (UP) on June 8th. The Adarsh Vyapar Mandal resolved to open all shopping malls in the state but decided to keep shops within the malls shut for business. The next day reports suggested that this indeed had come to pass.

The traders’ demands were self-centred: they wanted a rent waiver for the period of the lockdown in the previous months. But the story is emblematic in many ways about the teething troubles India is likely to experience as it opens up after an extensive lockdown to combat a viral pandemic.

The good news, as seen through Google’s mobility data, is that India is indeed opening up, however slow the process may be. A month after the lockdown, on April 26th, mobility across India had come to a grinding halt. Traffic at transit stations—an estimate for public transport—fell by a whopping 66 per cent, a figure that rose by 19 percentage points by the end of May as the fourth phase of the lockdown came to an end. But overall, mobility had fallen by half across the country. In simple terms, traffic, including freight and individuals moving around, had come down dramatically. This attested to the success of the lockdown in keeping people where they were: at home. Again, data from Google Mobility reports showed that residential occupation—basically people staying indoors—rose by 22 per cent in April and declined marginally to 19 per cent at the end of May.

Mobility is the first step towards revving up India’s economic engines. But just like the story of traders from UP, here too, there are mismatches. Key economic and industrial states are slow to open up. Maharashtra and Delhi are the biggest laggards. It is not surprising as these states have borne the brunt of the pandemic and now account for some of the largest growth rates of infection. Mobility data shows that Gujarat was the only large industrial state to open up fast by the end of May when compared to the first week of the lockdown in March. Not surprisingly, it is the economically poorer states that are the fastest to open. Madhya Pradesh displayed the maximum speed in this respect.

There were other green shoots as well. The Centre for Monitoring Indian Economy (CMIE) noted that the total number of people employed in May rose by 21 million. This was against the backdrop of continuing weakness in the Indian labour market: the unemployment rate continued to remain very high at 23.5 per cent, though this figure was the same as it was in April. But the good news is that both the labour participation rate and the employment rate improved.

There is no doubt that India’s economy is in a spot. But it is important to separate the effects of Covid-19 and the administrative response to it—the lockdown announced on March 24th—from the pre-existing weaknesses in the economy. The aversion of banks to lend and the very low appetite in companies to borrow has been a persistent, ‘twin balance sheet’ problem for a while. What exacerbated the problem was the literal halt in the movement of the Indian economy after the lockdown.

The data, however, does not paint a one-sided picture of the end- of-days kind of scenario for the Indian economy. But one has to look at it dispassionately to separate what is real from what is imagined. Take the mobility data. Viewed in isolation, the image it creates is one of Indians just locked in their homes and not venturing out. This is impossible in an economy of 1.3 billion people with a predominant pattern of informal employment. But even if one leaves that aside, data shows that some changes were at hand. To give another example, collections from FastTags on national highways came down from Rs 1,840 crore in February to Rs 1,420 crore in March. This figure fell off the cliff in April to just Rs 248 crore. In May, a smart recovery to Rs 1,140 crore was seen. How does one interpret this? In May, the Union and state governments progressively relaxed district and inter-district movement for essential and then non-essential items. Then, the movement of individuals in their vehicles was also allowed.

IF THESE anecdotes paint a picture of revival after nearly 70 days of lockdown of varying degrees, the macroeconomic picture is grim. The news on the last Friday of May was expected to be unhappy and it was. India’s economic growth had slowed significantly in 2019-2020 and had shaved off nearly two percentage points since last year. The last quarter—when the Covid-19 struck India—was harrowing: the Indian economy spluttered to 4.2 per cent growth compared to the previous year. In Gross Value Added (GVA) terms—another way to measure output—the economy grew by just 3.9 per cent during this period.

If the big numbers were disturbing, the fine print was harrowing. Take construction, the sector that employs a vast number of informal labour. In the fourth quarter of 2019-2020, the growth rate for construction clocked a negative 2.2 per cent compared to a healthy 6 per cent growth in the same quarter in 2018-2019. This number is a barometer of mass employment and should be seen along with the huge internal migration that has taken place in the last two months. It is unlikely that it will recover its high mark in the first quarter of 2020-2021.

If the overall news was grim, there were hopeful tides as well. Agriculture, the sector that has borne the brunt of a historic deflation in the last four-five years, is recovering smartly. In the January to March quarter, it posted a growth of 5.9 per cent, much higher than the 1.6 per cent in the same quarter of the previous year. Overall, the sector grew by a healthy 4 per cent in 2020 (in GVA terms). The good news does not stop here. In May, sales of fertilisers across India rose by nearly 98 per cent over the same month last year. This was the seventh straight month when these sales continued to grow rapidly. This is the surest indicator that agriculture is on the mend and the great ‘rural Indian crisis’ that economists and activists had bemoaned may be ebbing.

What will also act as a cushion for the rural economy, at least in those states where government agencies purchase foodgrains, is the huge amount of cash that such operations inject in the system. In Madhya Pradesh, for example, wheat purchase from farmers this season has touched the Rs 20,253 crore mark. This gives a vital financial cushion to farmers and, in turn, allows purchases of non-durable consumer items that are expected to lead to the path for demand revival. At the moment, what is necessary for economic revival is ensuring a pick-up in demand. Given the uncertainty and stressed balance sheets, it is hard to see how investment will pick up without consumption perking up first.

HSBC India economists estimate that in 2018-2019, nearly 55 per cent of consumption expenditure in India was on essential goods and services and the remaining 44 per cent on discretionary goods and services. A clean demarcation along geographic lines is very difficult but it is not hard to understand that cities—where there are persons with higher incomes—account for a larger share of discretionary spending on durable goods that lie higher in the value chain. The problem for the Government is in the difficulty of reviving discretionary spending on durable goods.

In the past, such as during the 2008-2009 global financial crisis, it was possible for the Government to spend and support demand. India was growing at a high rate and the Government’s debt level was not elevated. Banks, too, were relatively free to lend. That enabled discretionary spending to continue. That support is not an option this time. But there is a silver lining as well.

Agriculture, the sector that has borne the brunt of a historic deflation in the last four-five years, is recovering smartly. In the January to March quarter, it posted a growth of 5.9 per cent, much higher than the measly 1.6 per cent in the same quarter of the previous year

‘Typically, India’s savings rate falls during slowdowns. But this time may be different. With households unwilling to dip into savings to fund discretionary consumption, and Covid-19 fears coming in the way of travel and suchlike, the savings rate may rise. Deposits are already growing rapidly at 11 per cent year-on-year despite falling rates at banks. Rising savings also means that consumption can’t be counted upon to revive growth, but public sector borrowing may be easily funded for now,’ the HSBC economists note in a report earlier this month.

This cushion, however, is not large. So far, the Government has been very careful in spending money. It has, for example, given money to the poor and the migrants who have been forced to go back to their homes. But beyond these necessary expenditures it has, rightly so, resisted demands to spend its way out of the crisis. Given poor economic performance, tax revenues are extremely stressed and the only option for increased spending is to monetise deficits. This has led to a heated debate among economists. There are some who have argued that not spending now will lead to long-term damage to the Indian economy in terms of growth foregone and a reduction in potential growth as well. But there are others who have urged caution.

For example, HSBC India economists argue that, ‘the current slowdown is more demand-driven. But stretched balance sheets imply that a strong and permanent demand stimulus may not be possible. Instead, India’s best bet is to nurture the initial demand stimulus, which arises naturally as the economy unlocks, by ensuring that it is not met with supply-side constraints of finance, labour and logistics.’

‘Finally, relying solely on a demand stimulus has shortcomings. A cut in tax rates can just push savings up if households are risk averse and not willing to spend. Instead, the Government should continue to ease supply-side constraints, for instance, by cleaning up balance sheets [via a simpler IBC process, etcetera]. This alone can lead to sustainable growth and jobs after the pandemic.’

So far, the Government has stuck to this script. This has not gone down well with those demanding a bigger fiscal stimulus. The issue is simple: the Government has not only to deal with a current reality of rising Covid-19 cases, healthcare costs, meeting urgent needs of the poor and migrants but also to keep in mind a highly uncertain world the pandemic has unleashed. It is better to be prudent and spend as and when the need arises. Unlike past crises when spending ensured not just survival but also a way to revived growth, this time round it is different. The instruments of last resort—deficit monetisation and higher taxes—are always available but to use them as measures of first resort is inadvisable.