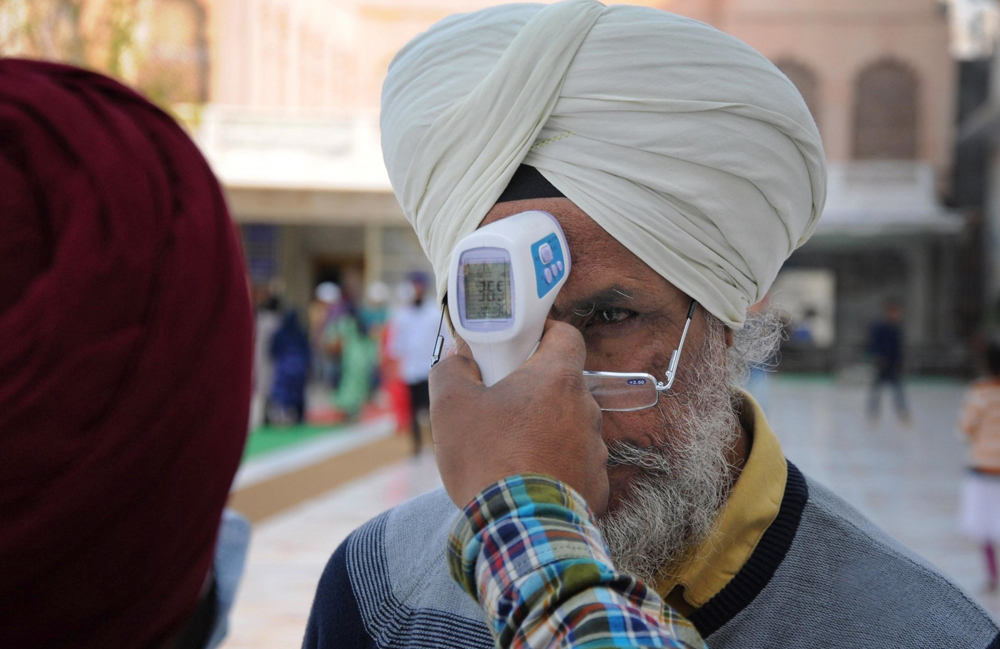 The announcement that Baljeet Singh had been waiting for was made on March 25th. Singh woke up to the head priest of the gurudwara in his village of Ranike in Sangrur district of Punjab announcing that two NRIs who had come to the village from Dubai had to report themselves to the local police station. “The granthi [gurudwara priest] went on to say that the men will be given the quarantine stamp and will have to be in isolation for more than two weeks. Usually the return of NRIs in villages is a cause for much celebration and bonhomie; this time, it has only brought us fear,” Singh tells Open over the phone.

Since the dawn of 2020, there has been no border strong enough or country resilient enough to withstand the terrifying spread of the coronavirus disease (Covid-19). India has been no exception with the first three cases reported in Kerala, all of whom were students in Wuhan. But throughout the months of January and February, it remained a distant threat. Something which was out there, something which would eventually come to us, but till then, we were safe. And then came March 3rd. An Indian national who had travelled to Italy had tested positive and the spread had already started. Any epidemic, in this case, a pandemic, has a certain pattern in its outbreak, starting from densely populated neighborhoods and then making its way up the socio-economic ladder. Covid-19, however, is a disease that has chosen to work differently. From actors to businessmen who frequent exclusive ski resorts to world leaders, the first wave of infections internationally (not in Wuhan) came from people who travelled the world. In India too, the second first wave, which began on March 3rd, came from people who had travelled to Europe.

Amidst all of this, Punjab was one of the first states to swing into action. On March 6th, the state’s health department issued a precautionary advisory under the Epidemic Diseases Act, 1897, and a group of ministers was set up to monitor the situation even though the government took pains to assure everyone that the situation was under control. An app titled COVA (Corona Virus Alert) was launched in a bid to generate more awareness.  On March 9th, Punjab got its first case, an NRI visiting Hoshiarpur, and it seemed, the state had moved just in time. But all of this was going to eventually prove to be a case of locking the stable after the horse had bolted.

Baldev Singh, a 70-year-old granthi of Pathlawa village, Nawanshahr, had left for Italy and Germany in the last week of February with two other men from neighbouring villages, for religious congregations. He returned on March 7th, was scanned at the airport and advised to be under home quarantine. Singh was not the first or even the last one to dismiss the advice completely. Hola Mohalla, an important Sikh festival, which sometimes coincides with Holi and is celebrated at Anandpur Sahib (a holy site for Sikhism), was scheduled from March 10th-12th, and Singh went there.

Additionally, he moved freely around the village and even visited the homes of people. By the time he succumbed to a cardiac arrest on March 18th, his footprint had spread far and wide. And his Covid -19 positive status was discovered only after his death. Singh’s death sparked off a race against time for the Punjab administration which moved to seal nearly 20 villages with more than 20,000 people put in home-quarantine. The CCTV footage of the festival was scanned to see all those Baldev Singh could have come in contact with even as his own family members tested positive, one after the other. Currently, there are 41 known cases of Covid-19 in the state, out of which 28 are directly linked to Singh, who is now referred to as a super spreader.

But for the Punjab administration, this was just the beginning. On March 23rd, Punjab Health Minister Balbir Singh Sidhu wrote a letter to Union Health Minister Harsh Vardhan saying 90,000 NRIs are in the state. “Many of them have symptoms of Covid-19 and are already spreading the disease,” he said, asking the Centre to release funds to the tune of Rs 150 crore for the state to prepare for the outbreak. The number was later clarified to be slightly above 50,000 but with a bulk of this coming in from countries like Italy, US, Spain and UK, the worst affected from the pandemic currently. The fear of an outbreak was very real. On the same day, the Punjab Chief Minister announced a strict curfew in the state as lockdown orders were not being flouted even as teams fanned out in the state, but particularly in the Doaba region to start tracking NRIs. In an interview to Huffington Post earlier this month, Sidhu had said the state had only 314 ventilators, 24 in district hospitals and three medical colleges, and 290 in the private sector. The state’s population is more than 20 million.

“This is our biggest challenge, tracking down every single person who has come from outside and ensure that they are practicing self-isolation,” says Rajesh Bhaskar, who is part of the state’s media and communication committee regarding Covid-19. From radio jingles to roping in panchayats and gurudwaras, the state wants to bring in every influential voice in Punjab into combating the spread of the virus. Most NRIs, the state claims, have been tracked down though there are still some who are missing. “80,000 policemen, 10,000 health workers, 300,000 government officials; the entire state machinery is involved in tackling the Covid threat in the state. From 5 am to midnight, we are on our feet,” says bureaucrat Rahul Tiwari, who is head of the state control room for Covid-19. He spoke with Open on the phone a little after 10 am with strict instructions of the call not exceeding five minutes. From regular video conferencing with the Chief Minister to tabulating briefings and reports being sent from every district to managing the helpline (500,000 calls over the past one week) the control room is the hub of the state’s fight against the disease. “We have the passport numbers of the NRIs who have come into the state. We are tracking down each and every person. Right now, the state has only one goal—to save as many people as possible,” he says.


The tradition of immigrating has always been a strong one in Punjab and the NRI status is an exalted one. It is lauded in popular culture and the return of the NRI is always an occasion for much celebration across the state. The period from December to March, in fact, is peak season for the expats to come visiting as it coincides with weddings as well as offering an escape from the harsh winters of their adopted homelands. This time, it was also the perfect window of opportunity to escape the ever-expanding wrath of a deadly virus. “When NRIs come visiting, the whole village comes to a standstill. There is admiration, respect, envy, a whole bouquet of emotions and everyone wants to welcome them. This time around, there is only anger and resentment. There is a strong feeling amongst people that the disease has been brought to us by them. The stories about refusal to isolate and freely mingling with others has created anger as well as panic,” says Baljeet Singh. In his village, a couple from Australia had returned on the 10th of the month and while there was awareness back then, there was no surveillance. “They were responsible, however, and did not come out for some time. But by the time the granthi announced the presence of the Dubai visitors, people had already stopped stepping out. In a village like ours, it is a very strange concept—self-isolation and social distancing—but we are doing it.”

Punjab is divided into three main regions—Majha, Doaba and Malwa. Doaba is often referred to as the NRI belt as the bulk of the state’s immigration is from here. It is also the most prosperous region, owing partly to its location (between the Beas and Sutlej river) and also due to the NRI remittance. Bigger cities in this region include Jalandhar, Phagwara, Banga and Anandpur Sahib, all of which are now under the strict curfew all over the state. “We have teams that go door-to-door in order to find out NRIs or people with symptoms. Some come forward on their own, some don’t. There are sanitisation drives being undertaken, food packets being distributed. We have to be on our toes since Jalandhar has a large number of NRI population in the city currently,” says a state government official involved with the Covid-19 tackling efforts. He did not wish to be identified. There are, however, concerns about essential supplies being available though ration shops are presently open.

A big concern in Punjab, as it is across the country, remains about the testing numbers. Are the number of Covid -19 positive patients low because not enough testing is being done? Officially, India maintains that there is no community transmission but there have been cases in Jalandhar alone where people with no travel history have tested positive.
Another looming problem that Punjab will have to take care of, sooner rather than later, is that of harvesting. The winter crop will be ready by mid-April and already farmers and experts alike are worried about how the state will figure a way around this. Agriculture has been included in the list of essential activities issued by the Government following the lockdown announcement but worries abound about getting the harvest to the mandi and storage. “The wheat will ripen when it has to, nature does not know of lockdowns. As of now, we have been told that there will be provisions to bring the harvest to the mandis in a staggered manner but will the storage facilities be adequate? Will the farmers be compensated for the delay in their harvest reaching the mandi? All of this has to be streamlined,” says agriculture specialist Devinder Sharma. From worries about labour shortage to how this may impact the monsoon crops, the Punjab farmer is adopting a wait-and-watch attitude but that does not stop worry from creeping in. “We have been given assurances that the harvest will be taken care of but there is a lot of uncertainty. Punjab provides combined harvesters to other states like Madhya Pradesh at the start of the season and right now, we don’t know if these will be allowed to travel back to the state. At this point, everything is up in the air,” says Amritdeep Singh of Khurd Kalan, a border village. Quite like the fate of the world itself. 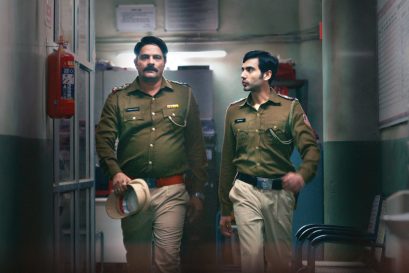 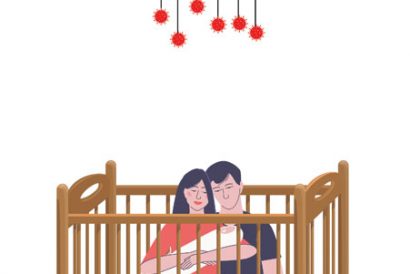 Parenting in the Time of a Pandemic