“People are very fixated on ownership. We are giving them a smarter option” 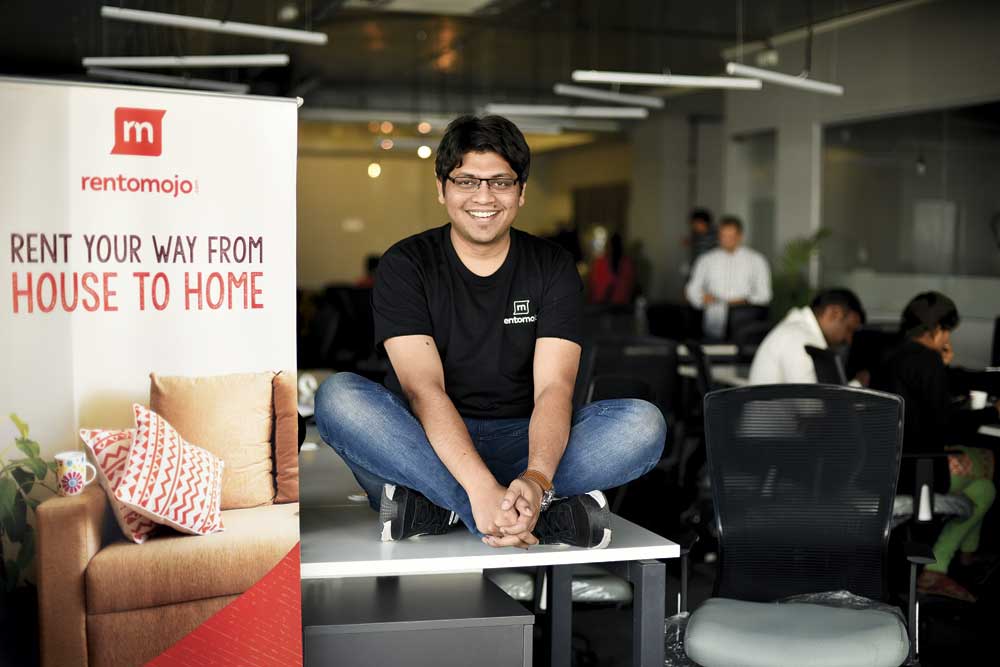 ON 24 DECEMBER two years ago, Chhattisgarh boy Geetansh Bamania turned 26 and he was going to celebrate it with his parents over dinner at a restaurant in Mumbai. His parents reached on time, but he called to inform them that he would not be able to make it. They had to go ahead with the celebration by themselves. Bamania was in another part of the city, delivering furniture to a client. After ensuring that it was lined up in the corner chosen by the client, he heaved a sigh of relief. He had started Rentomojo, a portal that would rent out furniture, furnishings, appliances and other home essentials, just a few days earlier. This was his first order and that it happened to be his birthday was just tough luck. Months of intense planning had gone into the business and so long as the delivery went off successfully, he told himself, little else mattered. “I was the owner, the worker, the loader and the one who delivered,” says Bamania. “The first few days of Rentomojo were simply awesome—the first order, the first outsourcing and the first delivery. This is a memory I will always carry with me however big the company grows.”

Rentomojo is the brainchild of Bamania and his friend Ajay Nain, and it is all about doing away with traditional ownership of household objects. Instead, the startup offers ‘smart’ ownership of these to the city’s vast market of non-permanent residents. With offices in six migrant-heavy cities— Mumbai, Delhi, Bengaluru, Pune, Noida and Gurugram— Rentomojo is aiming to become a one-stop provider of such services.

Bamania’s mother was a doctor, his father an engineer, and he was the younger of their two children. A graduate of IIT-Madras, he specialised in Mechanical Engineering but wasn’t keen on a regular career. He was inspired instead by the startup revolution unfolding in India, with opportunities aplenty for those who had unique business concepts and execution abilities. Services like Just Dial, Bharat Matrimony and MakeMyTrip had already made their mark and Bamania wanted to undertake a venture that met a clear and unfulfilled need. “As a student of IIT, I was trying to solve a lot of things. When I was in the third year, a friend needed a flat on rent. I was looking hard for one. The search gave me an insight into various issues,” says Bamania.

Some years later, Magicbricks entered the market and an online housing rental service was staring Bamania in the face. That is when he realised that with so many houses being rented out, surely people would need all the rest that goes into making them habitable. That this could be a starting point for a new venture stayed with him, though it was only after having gone through the pangs of starting, running and shutting down two other startups that Bamania got around to giving the rental idea a go. “People love to do up their houses,” he says, “But when one is living the fast-paced life of present times, then turning a house into a home with all [household] goods owned becomes a difficult task. Affordability becomes a big issue for professional migrants to the cities, as they often do not have the resources to buy furniture, furnishings or appliances. Rentomojo is the solution they are looking for.”

Fully furnished ready-to-occupy homes were, of course, available on rent. But Bamania reasoned that since the difference between the rents of furnished and unfurnished apartments was so large, a better option for people would be to take furniture and appliances separately on rent. Such a service could be aimed at students, newly-weds and young office goers who have come from other cities and live in rented accommodation.

An advertising campaign to popularise the idea of rental furniture was central not just to giving an identity to the portal, but also selling the concept to people at large. In India, the idea is in a nascent stage, and Bamania knew that he would have to play market creator. Given the target group he needed the attention of, the brand needed an approach that was quirky and fun. In January this year, Rentomojo unveiled an outdoor campaign in Mumbai, Delhi-NCR and Pune. Striking curiosity with the image of a nude man with a basket around his waist, ‘How your home feels…Unfurnished!’ said the hoardings. Under it was mentioned a starting price of Rs 749 for the service. The effort achieved two things: it informed people that they don’t have to buy furniture and it gave the brand a measure of recall that has served it well. Since it is launch in December 2014, the company claims to have developed a subscriber base of 16,000 customers.

Affordability is a big issue for professional migrants to the cities, as they often don’t have the resources to buy furniture, furnishings or appliances

About 11 months ago, the company raised Rs 13 crore from IDG Ventures India and Accel Partners. Though the company also made a foray into motorcycle rentals with seed funding from a London based angel investor, that business is now being overhauled.

AFTER HE GRADUATED from IIT-Madras, Bamania joined the auditing firm KPMG in June 2011 as an infotech strategy consultant. He quit after seven months in the job. The entrepreneurial bug had got him. In May 2012, he started Click2skill.com, a community based marketplace for the exchange of skills. He wanted to revolutionise the way people communicated, learnt and shared their experiences on a common platform. The venture, however, did not take off and he had to shut it down a year later. Meanwhile, he had also co-founded HopeMonkey, a crowd funding platform for individuals and corporations to co-donate money for causes they wished to support. “We tried to change the philanthropic landscape of India by instigating a change in behaviour amongst the youth, by carefully plotting game mechanics and meaningful human experiences,” says Bamania. That too shut down in January 2014. “I thought it was too early for something like this in India. My experience with HopeMonkey validated my thoughts, and I moved on to try something different,” he says.

After HopeMonkey folded up, Bamania joined the online store Pepperfry as the head of its furniture division. Here, he was selling as well as renting out furniture, and this gave him hands-on experience of the market he was keen to venture into. He quit in November 2014 and launched Rentomojo the following month. “Though I had tried my hand at various ventures, I knew that I did not want to give up,” says Bamania, “Rentomojo is something I feel very closely connected to and I enjoy the hard work that goes into turning it into a major brand.” With a team of over 200 employees across six cities now, he is confident of the business’ future and clear that this is where he wants to be.

Originally from Bhilai, he recently featured in a list of 30 under- 30 ‘entrepreneurs to watch out for’ in Forbes Asia. His advice to those who are keen on getting into the startup space is that funding is the last thing they should worry about. Long-term visibility, he believes, is more important. “If your business fundamentals are right and you are able to communicate the vision of your venture as a founder, the funding will come in,” he says. What is crucial is to also have clarity on what kind of a team will be able to execute that vision, however.

Bamania lays emphasis on personal communication as a tool for business development. “In my business, I have to talk to people. However advanced the means of communication are, people still feel extremely connected when there is personal interaction. It is important to any business,” he says. “I believe that everyone is trying to communicate with the world… Offline communication continues to be more important than online.”

That means a lot of travel for him, but so long as he gets sufficient time for some rest and recreation at home after the trips, he doesn’t complain. He is gadget savvy and loves to exercise his culinary skills. His dal khichdi is especially good, he says. “I love to cook rice in different ways.”

True to the ethos of the sector he is in, he does not own a car, preferring to use Ola or Uber services instead. “It is cumbersome to own one. When these options are available, why not use them?” he asks. From a middle-class family, his parents taught him that there was no way around hard work for success, he says. A spiritual person, he is however hesitant to admit that he is a believer. “There is a certain creator, for sure, and due to this, you want to do the right thing,” he says.

Returning to business talk, Bamania says that he is trying to carve out a strong niche for Rentomojo in an overall rental market he estimates at $15-16 billion. There is a growing demand for online services as people want the shops to come to them now, and that he feels assures Rentomojo’s business model its future. There are challenges like competition from other furniture rental services online, but with India’s economy expected to grow rapidly over the next decade with a huge amount of capital flowing into the country, there is plenty of potential. “I often wonder why people are fixated on ownership,” he says, “Through rentals, we are giving them a different type of ownership—the option of paying a monthly amount for using only what they want to use. Rentomojo wants to give smarter solutions to people.”