Parameswaran Iyer, the officer behind the Swachh Bharat mission, promises an India free of open defecation by October 2019 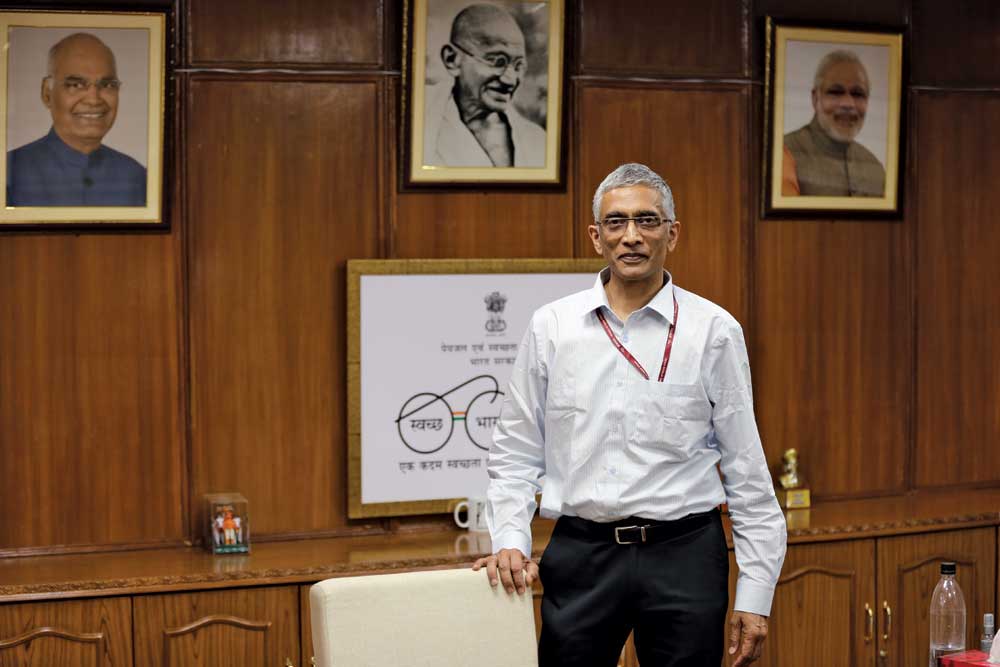 IN PARAMESWARAN IYER’S mission, each day counts. It is spelt out prominently in black ink on a white board on a wall in his office. There are seven figures: the days he has been working on the Swachh Bharat assignment, days left till the end of his job contract, villages declared Open Defecation Free (ODF), districts declared ODF, number of Swachhagrahis (grassroot motivators of behavioural change), percentage of rural India that has access to toilets; and the number of villages rated on the Swachhata Index, in that order. Further down the wall are framed cartoons on sanitation by Sudhir Dar, and facing it, around a dozen paintings on Swachh Bharat done by primary school children across the country. “Please do not make it a story about me,” he says at the outset, “Let it be about our work.”

The white board in Iyer’s office stands testimony to that work. Sanitation coverage, an indicator of an individual’s access to toilets in rural India, is estimated at 82.6 per cent today, up sharply from 39 per cent in 2014. Since 2015, as many as 352,267 villages have been given ODF status. “This means there are no signs of excreta [in public spaces] and there is access to toilets in these villages. It also means the village has understood the importance of sanitation,” says Iyer, 59, secretary, Ministry of Drinking Water and Sanitation, which is spearheading the programme to make rural India Open Defecation Free by October 2019. He is about to move on to the next figure when a young man walks in wearing a white t-shirt with ‘Swachh Bharat Mission’ printed on the back. “Green tea, please,” Iyer says.

The statistics that are not on the white board are on the tips of Iyer’s fingers. He reels them off passionately. The 372 districts declared ODF are spread over 13 states and three Union Territories. The biggest challenge lies in the highly populated states of Uttar Pradesh, Bihar and Odisha. “We are well on track to achieve the target Prime Minister Narendra Modi has set to make India Open Defecation Free by Mahatma Gandhi’s 150th birth anniversary next year,” says Iyer, who has spent 785 days at the job and has 370 to go, as per his contract with the Government. The urban part of the Swachh Bharat Mission, touted as the largest behavioural change initiative in the world, is under the Ministry of Housing and Urban Affairs.

A 1981 IAS officer of the UP cadre, Iyer worked for about 13 years at the World Bank, mainly in Washington, as a water and sanitation expert. One of the reasons for moving to the US was to help his daughter Tara and son Venkat pursue their interest in professional tennis. Iyer, who played the game as a student of Delhi’s St Stephen’s college (and represented India at the Junior Davis Cup), travelled with his daughter as her coach and road manager for two years from 2006 to 2008. She has played for the country at the Asian Games and participated in the Fed Cup and Junior Wimbledon too.

From 2012 to 2015, Iyer was in Hanoi, Vietnam, posted there to look after the World Bank’s water and sanitation projects. It was in the Vietnamese capital that he watched Modi’s first Independence Day speech of August 15th, 2014, on TV. Iyer recalls being stunned by his mention of sanitation as a top priority for the new Government. “My wife and I were blown away by the Prime Minister putting Swachh Bharat on the top of the agenda. At the end of the PM’s speech, although I had no real hopes, I told my wife that I should be back in India,” he says. About 18 months later, he was back as an officer of the Indian Government, though he skips the details of how this happened. “I jumped at the opportunity. It was an incredible chance to serve the country on something which had an impact on critical aspects like health and women’s safety,” he says. According to a Bill and Melinda Gates Foundation study, households in ODF villages in India have better health indicators. A UNICEF study estimates that a household in an ODF village saves an average of up to Rs 50,000 annually on such expenses as treatment of illnesses. A 2007 World Bank study estimated that lack of sanitation costs India over 6 per cent of its annual GDP.

Working through the government apparatus at the state, district and local levels, Iyer and his handpicked team (officers Akshay Rout, Arun Baroka and V Radha among othem) have used various techniques to modify patterns of behaviour that have existed since time immemorial. Besides developing all-India mass media campaigns such as the Amitabh Bachchan led ‘Darwaaza Bandh’, they worked with state governments, provided technical assistance and encouraged them to enlist swachhagrahis—workers who now total 430,966—for a mass contact programme. “It is all about convincing people about the advantages of using toilets,” says Iyer, who has visited almost every state over the past two years.

Earlier this month, while making a speech at a Swachh Bharat event in Motihari, Bihar, Modi took Iyer by surprise when he appreciated Iyer’s contribution to the Mission and asked camerapersons to find him among the crowd. Iyer then stood up and thanked Modi and the audience. “It was incredibly magnanimous of the Prime Minister. The kind words were of course meant for the Swachh Bharat team across the country, and it spurred us to work even harder,” he says.

Asked how earlier cleanliness drives were different from this mission, Iyer says the game changer is the Prime Minister’s leadership and advocacy. “He put it on the top of his agenda. In any country, a programme gets momentum when the chief executive is personally involved.” He echoes the Prime Minister in calling it a ‘janandolan’ (people’s movement). Another significant difference, he says, is that outcomes (ODF counts) are used as a yardstick of success, not output (construction of toilets). A village is declared ODF if each of its households has access to toilets and residents stop defecating in the open. “This necessitates the community as a whole taking upon itself the responsibility of triggering behaviour change among its residents, implementing a community movement to build and use toilets and making their village Open Defecation Free. An ODF village [has significant health and economic benefits and also] safeguards the security and dignity of women and girls,” says Iyer.

Sociologist Bindeshwar Pathak, founder of Sulabh International, says that the Swachh Bharat Abhiyan has been more effective than earlier sanitation programmes. In the first such attempt in 1954, he says, it was called Community Development Programme, under which 80,000 toilets were to be built. In 1986 came the Central Rural Sanitation Programme. However, in both, single-pit system pots were used, unlike the two-pit toilets being constructed under the current plan. “The entire country is now striving to make the mission successful. Girls are telling parents that they will get married only in homes where there are toilets. It is changing attitudes in India,” says Pathak. He narrates the tale of Sangeeta, a woman from Nagpur in Maharashtra, who sold her ornaments to build toilets. The woman is now working with him as a Sulabh ambassador.

“The campaign has thrown up several stories of ordinary people doing extraordinary work,” says Iyer. Earlier this month, under a ‘Chalo Champaran’ campaign of Swachhagrahis, 20,000 of them from across India went door-to-door in Bihar telling people of the virtues of sanitary hygiene. In a remote village of Kishanganj district, an enlistee from Arunachal Pradesh, Rakhe Techi, held locals rapt with her own story. Her hilltop village of Boa-Simla, she told them, was inaccessible for over six months during the rainy season. People would spend their life’s savings on diarrhoea-related illnesses; nobody had ever seen toilets, but once they heard of the relief these could offer, they decided to haul heavy materials uphill to build some. Kishanganj, she said, would have to make much less effort to achieve the gains that Bao-Simla did. Citing the benefits of health and the role of women in this mission, Techi struck a chord with the villagers and they resolved to end the practice of open defecation.

THE DECLARATION THAT India is Open Defecation Free would not be the end of the effort. Another challenge for Iyer’s team would be to sustain that status. Swachhagrahis would need to be retrained for a sustainability programme. Another initiative called ODF-Plus involves liquid and solid waste disposal in rural India; its aim is to use waste as a resource that can be recycled for various purposes.

As the Clean India campaign gains momentum, celebrities—actors, sportspersons, politicians—are lending it their endorsement. While the Abhiyan has been welcomed almost universally, like all ambitious projects, it has faced its share of criticism. In UP, for example, the political opposition has questioned the quality of toilets being built and also cast doubt on the targets cited. According to Iyer, the Ministry of Drinking Water and Sanitation has been promoting twin-pit toilets since these are best suited to the soil and weather conditions in rural India. The Government also claims to be tracking reports of poor- quality toilets so that state governments can be asked to address such problems.

Iyer’s office has a miniature model of the Indian two-pit pour flush compost toilet. This, he says, is economical, safe, easy to clean, eco-friendly and has its own waste treatment unit to ensure it doesn’t harm the ground water beneath. Next to it is a small bottle of human compost that was drawn out by hand from such a toilet.

Iyer has a lot more to narrate, and hopes to keep the figures on his white board ticking. But he has a meeting to attend soon, and he always likes to be on time. 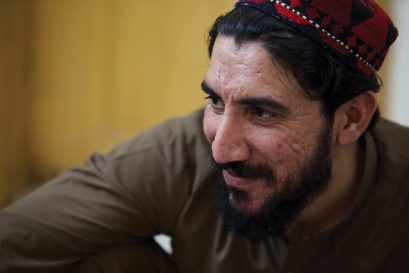 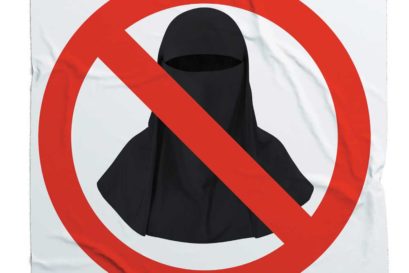 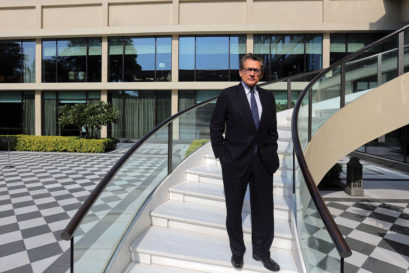