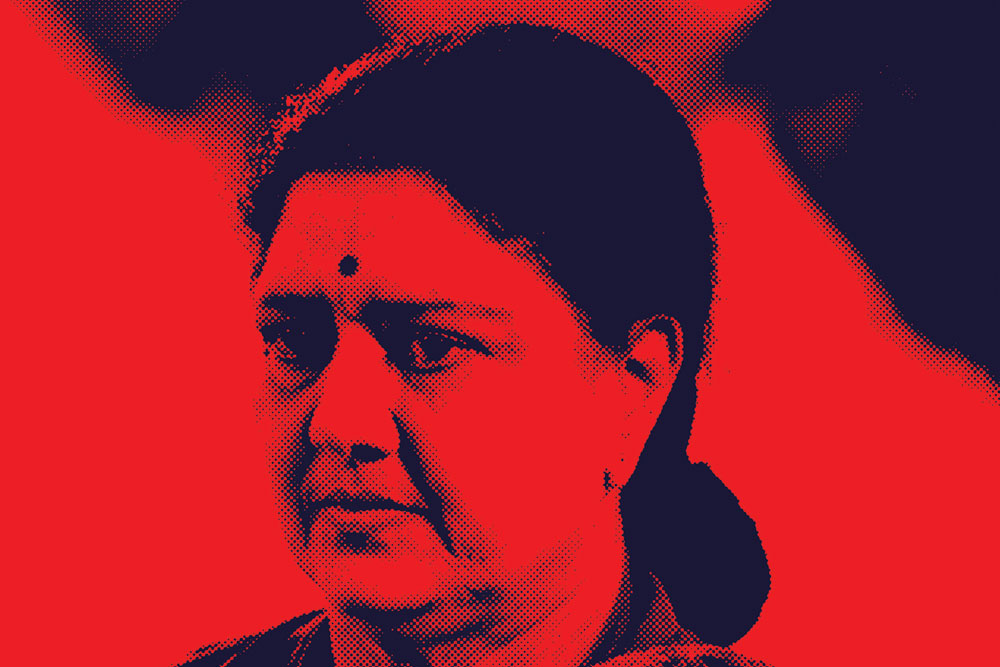 
WHEN FORMER TAMIL Nadu Chief Minister and AIADMK leader J Jayalalithaa emerged on bail from Parappana Agrahara in Bengaluru on a Saturday afternoon in October 2014 after three weeks of incarceration in a 17-year-old disproportionate assets case, she was treated to a welcome worthy of a queen returning from exile. O Panneerselvam, whom she had installed as Chief Minister in her absence, and her senior ministers received her with folded hands. Throngs of supporters came bearing flowers and good wishes as her cavalcade drove to HAL Airport where a chartered flight waited to take her home. Like her mentor MG Ramachandran before her, she had succeeded in replacing politics with imagery, and the image of the leader was unthinkable outside of her portrait as the saviour of the land. The taint of corruption washed off her in no time and she coasted to victory in the May 2016 Assembly elections, bucking anti-incumbency, which had been the one constant in Tamil Nadu politics since 1984.

As Tamil Nadu awaits its biggest ‘release’ of the season—that of Jayalalithaa’s fellow-accused and long-time aide VK Sasikala from prison—and speculation about her role in the 2021 Assembly elections fills the air, it is useful to point out why she cannot execute an Amma-esque comeback. If the sobriquet of ‘Chinnamma’ maps her to the wicked template of the stepmother—the opposite of the pervasive maternal archetype that Jayalalithaa embodied—in the popular imagination, her own loyalists, including the present Chief Minister Edappadi K Palanisamy, who was chosen—by her, as her nephew TTV Dhinakaran has repeatedly pointed out—to keep the chair warm, have distanced themselves from her. There is no place in the AIADMK today for Sasikala, who briefly ran its affairs as interim general secretary, operating from Veda Nilayam in Chennai’s Poes Garden. In fact, the AIADMK government’s proposed takeover of Jayalalithaa’s house, disregarding a court verdict recognising her niece J Deepa and nephew J Deepak as her legal heirs, is seen as a move to ensure that Sasikala does not come to occupy it, thereby symbolically excising her from Amma’s legacy.

Ironically, if there is someone else in the AIADMK camp who feels sidelined today, it is Panneerselvam, who had joined forces with Palanisamy to oust Sasikala and Dhinakaran from the party in 2017. Earlier this month, Panneerselvam, who is the AIADMK Coordinator, called for a party high-level committee meeting to get closure on some of his demands—including the formation of an 11-member steering committee and control of party district units. The meeting was reportedly inconclusive and an executive committee meeting is set to be held on September 28th to sort out matters between the Palanisamy and Panneerselvam camps. Meanwhile, the AIADMK has issued a gag order prohibiting its leaders to discuss the matter or to speculate on the chief ministerial candidate for 2021. “We have decided not to talk about it for now,” said AIADMK leader and Fisheries Minister D Jayakumar, in a telephonic interview. “What we can say with certainty is that the party will stand together against divisive forces and against the DMK, which has been undermining our efforts to help farmers.”


There is little to suggest that Sasikala enjoys the BJP’s support. Recently, the Income Tax Department began attaching 65 properties registered in the names of her benamis. While her lawyer’s statement claiming that she could be released later this month on account of good behaviour has created a flurry of excitement in Tamil politics, the media may well be exaggerating her prospective role in the electoral denouement

It is in the backdrop of this power struggle that reports of Panneerselvam reaching out to Dhinakaran acquire significance. AIADMK leaders from both factions have, however, denied that an alliance with Sasikala and Dhinakaran is in the works. That the AIADMK is ready to accept or merge with the Amma Makkal Munnetra Kazhagam—a party founded in 2018 with Sasikala as the president and Dhinakaran as general secretary—is “false propaganda by the AMMK to create confusion within the AIADMK,” Jayakumar told Open. “There is no place for Sasikala, Dhinakaran and their brand of family politics in the party. Just look at their performance in the 2019 General Elections—that should tell you something about the support they enjoy. Why would anyone want to ally with them?” Jayakumar said.

Dhinakaran’s runaway victory in the RK Nagar bypoll in December 2017, the seat Jayalalithaa had held until her death, and his pitched battle for the “two leaves” symbol had installed him as an emerging political force in the state and threatened to further destabilise the AIADMK. But he failed to establish himself as a mass leader—as evidenced not only by his party’s abysmal show in the 2019 Lok Sabha elections and subsequent bypolls, but also by the attrition of AMMK functionaries including seniors like V Senthil Balaji who defected to the DMK and V Pugazhendi, who joined the AIADMK.

Dhinakaran’s visit to Delhi on September 20th-21st, reportedly to seek the BJP’s mediation in making a truce with the AIADMK ahead of the polls, has once again put him under the spotlight. He would like to shore up his political legitimacy, but what can he, in return, offer the BJP, which is desperate to gain a foothold in a state where there has been backlash across the board over the three-language system proposed in the National Education Policy and the distribution of the GST proceeds between Centre and state? “It is mere hearsay. We are not interested in an alliance with Sasikala, or in facilitating her return to the AIADMK fold,” says a BJP leader from Tamil Nadu. “She is a political liability and we cannot be seen to be associating with her.” The BJP’s relationship with the AIADMK seems to be on track—the Dravidian party has backed the Centre’s Farmers (Empowerment and Protection) Agreement of Price Assurance and Farm Services Bill, 2020, citing ‘beneficial provisions’ for farmers—but the national party may not be averse to using Sasikala as a covert agent to keep its alliance partner on edge, say sources in the AIADMK. “The BJP did help broker peace between the two AIADMK factions after Amma’s death, but peacetime is almost over now. There is a war coming in April 2021 and we don’t have a General leading the charge,” admits a senior AIADMK leader. What he leaves unsaid is the possibility of Sasikala upsetting the tenuous balance in the AIADMK by luring disgruntled leaders away from the party. “An overt alliance between the Panneerselvam group and Sasikala is unlikely. OPS was the man who had insisted on evicting Dhinakaran and Sasikala from the party. If he patches up now, he will be seen as a bigger opportunist than Sasikala,” the leader adds.

There is little to suggest that Sasikala enjoys the BJP’s support. Recently, the Income Tax Department began attaching 65 properties registered in the names of her benamis, including a piece of land opposite Veda Nilayam where she had begun constructing what was to be her residence upon release from prison. While her lawyer’s statement claiming that she could be released later this month—her sentence ends in January 2021—on account of good behaviour has created a flurry of excitement in Tamil politics, the media may well be exaggerating her prospective role in the electoral denouement. Her grave-thumping act at Jayalalithaa’s memorial on the Marina before she went to prison in 2017 may turn out to be just optics in the end.