On a Wing and a Prayer

Living in a new normal 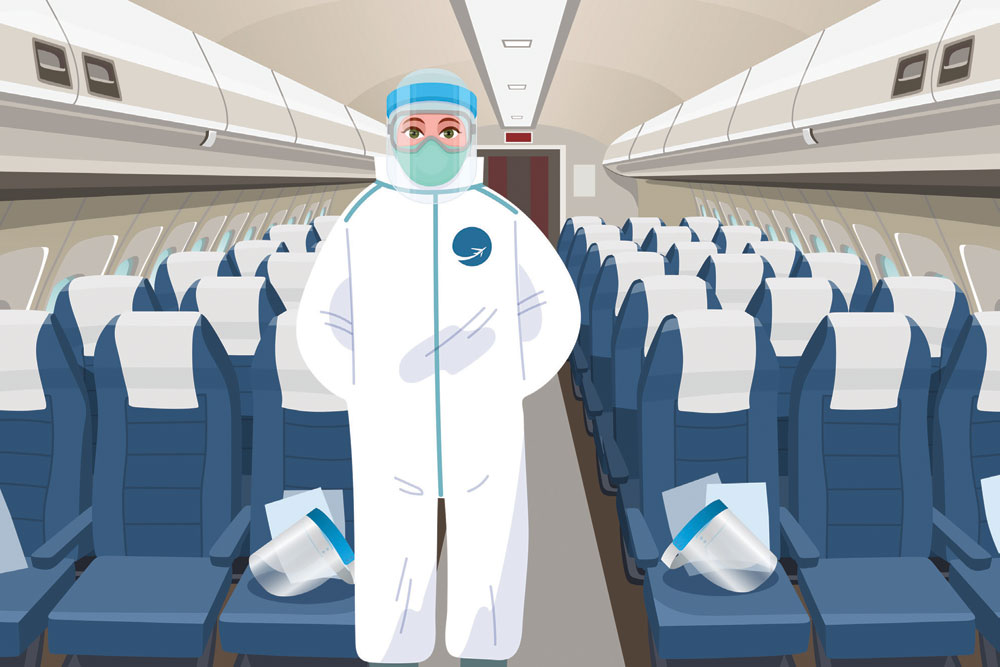 
ON MAY 26TH, the top story of The Indian Express told us ‘39,231 passengers flew on Monday’. I was one of those 39,231 passengers to take a flight two months after domestic travel shut down across India. It is odd to find oneself in the headline of a newspaper and as part of a pioneering number. And that too for something as mundane as catching a flight. But these days, nothing is usual.

Flying now feels more akin to going into a surgery rather than travelling. The airport is the preoperative space, awash in disinfectant. The airplane is the operation theatre, where one must rely on technology and the people in command, while being aware that dumb luck also plays a role. But you put your faith in those at the helm that they will take you over to the other side, safely and soundly. Your destination airport is the post-op ward where you know the worst is behind you, but you are not yet out of the woods.

Flying has always had the element of glamour backed by efficiency. Even while flights become more affordable (thankfully) to a greater number, it has always retained its swanky element. But now that we know that Covid-19 came to our shores via travellers on airplanes, can we ever look at flying the same way?

When I flew on one of the 532 flights that took off on day one after the lockdown was imposed, I glimpsed the future of flying. Glitz has given way to security. Public health and safety trump all other concerns. The airport is no longer a liminal space where you browse in shops and sip your pre-flight coffee. Instead, you are in a heightened sense of awareness as you are constantly reminded of possible perils. Hand-sanitiser dispensers beckon from every corner. Alternate seats are out of bounds, to ensure distancing.

On May 25th, the queues at the terminal were negligible. Before the March 25th lockdown, around 2,700 domestic flights operated on a normal day in the country. With only a third of the flights in the sky, coupled with the risk of flying, the desolation was hardly a surprise. The driver who dropped me even asked if the airport was open, as he’d never seen the drop-off point so free of cars and people.

To reduce interaction with surfaces, passengers are asked to print out not only their boarding cards but also their baggage tags. Masks, of course, are mandatory. Before you enter Delhi’s T3 terminal your check-in and hand baggage are sprayed down. A guard behind a screen, walled into a see-through booth, checks your Aarogya Setu app, your ID and ticket. Your temperature must be normal for you to enter the terminal.


The announcements on the flight are no longer paeans to being ‘on time’ or the food menu or the in-flight sales. Instead, the entire focus is on the sanitisation routine that has been undertaken for the safety of the passengers. It is in the alteration of these smallest of actions that one realises how we are truly living in a new normal

Once inside, the air feels thick with a mix of relief and unease. You are frisked with a two-feet long pole at the end of which a metal detector is attached. Basically no one wants to touch anyone, no one wants to touch anything. With innumerable cancellations, one is immensely glad just to see one’s flight’s name on the board with ‘scheduled’ written adjacent to it. I’d been trying to make it from Delhi to Pune from mid-March. And had booked tickets for March 25th, April 15th and June 1st. Like numerous others, I booked tickets every time I believed the lockdown was to lift. I booked a Vistara for May 25th, which got cancelled the day before departure. I even had a train ticket for May 27th. It was finally an Indigo flight, booked three hours before departure, that brought me to Pune. That was six tickets for a single destination! That might seem foolhardy and certainly was extravagant. But it was not exceptional. I know of someone who booked more than a dozen air tickets to Pune, before finally deciding to travel by road from Delhi, before Lockdown Four was announced. With no certainties, everyone did what they could, banking on self-reliance, a hope and a prayer.

Airline crew always make for a compelling image in their sharp uniforms capped by a groomed face. But this time, there was none of that. The airline crew wear a cape made from what looks like disposable plastic over their uniform. Even their shoes are encased in protective material. All you can see of their faces are their eyes. The mask renders smiles redundant. The chicness of the crew is stamped out by health and safety concerns. They now look like doctors in scrubs, with impeccable eye makeup. Just before entering the airplane, passengers are given a packet containing a face shield, a mask, and sachets of sanitisers. The face shield just adds one more Black Mirror level to this whole experience. It is hot and stuffy within the face shield, but considering it is only for two hours, one ought not to complain.

I reach my aisle seat, and find a man sitting in the middle seat in my row. We both jump. This is not what either of us had envisaged. No one wants to sit elbow-to-elbow. He shuffles to the window seat while murmuring that he hopes it is vacant. A man comes and sits across the aisle from me. Within minutes, he has taken off his mask and is helping himself to masala chips. By now visions of Covid-19 flying through the air are getting to me. The doors of the flight shut and I look around to see numerous empty seats and rows. The cabin attendant tells me to take the emergency row. I have it all to myself and heave a sigh of relief. While airlines have not instituted a vacant middle-seat policy one can only hope that one will be fortunate enough to bag an empty row and succeed at implementing social distancing.

The announcements on the flight are no longer paeans to being ‘on time’ or the food menu or the in-flight sales. Instead, the entire focus is on the sanitisation routine that has been undertaken for the safety of the passengers. With most passengers travelling alone, the usual hum of conversation does not hang over. Except for the occasional cry or squeal of a child, the airplane is unnervingly quiet. With only water bottles on offer, the cabin attendants pass through the aisle only when the bell lights up. When they arrive, they don’t press the lit button, instead they ask the passenger to do so. It is in the alteration of these smallest of actions that one realises how we are truly living in a new normal. A new normal where no one wants to touch a surface that has been touched by a stranger.

On landing in Pune, I expected another health check. But before I knew it, I had collected my checked-in bags and walked out into a desolate Pune airport. The home quarantine will need to be self-imposed and self-monitored, I realise. With the skies opening up, more and more people will finally be able to get home, but the joy of flying as we knew it, has been lost for now.