Modi at 70: A Style Statement 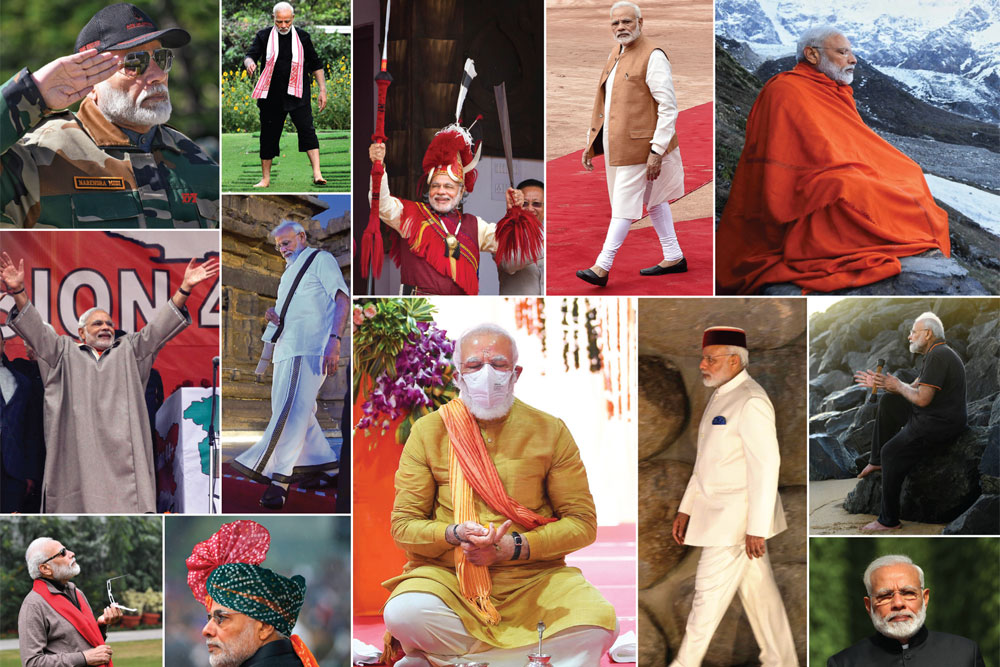 IT’S A STORY that never gets old. When Mahatma Gandhi met the King of England during the 1931 Roundtable Conference, he was asked whether he felt it was disrespectful to be so frugally dressed. No said the Mahatma, because the Emperor was wearing enough clothes for the both of us.

The same pride in swadeshi and in using clothes as a metaphor for a newly liberated country continued well into free India. Jawaharlal Nehru, whose father Motilal had a Savile Row warrant, wore khadi kurtas and achkans which would be so worn with washing that eagle-eyed assistants would have them darned by relatives—one particular story has been of diplomat TN Kaul’s sister being an expert darner of his achkans. Sustainable, local, made in India—all the values that are so much in favour now. In many ways Nehru is the template from which Prime Minister Narendra Modi borrows most when it comes to style, whether it is the Nehru jacket, now also known as the Modi jacket, the wildlife in the country’s premier home or even the daily yoga routine.

For many years, India’s politicians maintained a divide in what they wore at home, among the masses and what they wore on ski slopes of Davos and the suites of Waldorf. There would be the starched kurta-pyjamas or dhoti-kurtas at home contrasted with the spiffy bandhgalas overseas. With Rajiv Gandhi came the accessories of incipient liberalisation—the Ray-Bans, the Lottos which he wore on his last, tragic rally, the leather jackets. Even his mother smartened up when she went abroad, from highlighting the imperious white streak in her elaborate bob to draping fur coats over her silk sarees.

But by and large, the mantra was dress poor at home and look chic abroad. After 10 years of bland and correct dressing from Manmohan Singh, clearly the nation was ready for a new way of being in the public domain. As Mukulika Banerjee, anthropologist at the London School of Economics and Political Science says: “Other politicians may have been well-dressed, but Prime Minister Modi is immaculate. His clothes look perfect, every hair in his beard is in place, every fingernail is flawlessly manicured. It is as if he is the human version of the lotus, his party’s symbol, that looks untouched by its surroundings.” And it is this disconnect from the context, she points out, that seems to appeal to voters and resonates with the much-repeated messages of his supporters of his hard work, discipline, lack of dependents, utter uniqueness. The image reinforces the idea of him rising like an unblemished flower from the marshes to signal the dawn of a new ideological age. “The contrast with Gandhi, who dressed like the masses he served and led, is stark,”’ she adds.

And the colours are brighter too, from saffron to pink, from lime green to canary yellow. He is no less adventurous when he travels abroad, from burgundy bandhgalas in the US in 2014 to the patterned grey suit in South Korea in 2015 with a pop of burnished orange colour in the pocket square. Much like the young man on the street, Prime Minister Modi at 70 knows that pink is India’s black.

There was a time when such attention to palette and finer points was considered narcissism. Not too long ago, former Home Minister Shivraj Patil was pilloried for changing his clothes thrice a day and keeping a comb handy. But Modi’s sartorial style exudes confidence and power. It has also been consistent. Unlike Rahul Gandhi, whose style mirrors his political mood. The changing style of politicians also indicates how India has evolved, from the Five-Year Plans and the age of austerity and denial to the era of liberalisation. The demographic has changed as well and the acquisition of goods is no longer seen as something unbecoming. So when the Prime Minister wears an expensive kani shawl or BJP President Amit Shah wears a Burberry muffler, these are seen as reflecting the aspirations of the people. Their reliability is seen as evidence of an evolved style, echoing the late J Jayalalithaa’s cape, Mamata Banerjee’s blue-bordered cotton sari or the late Sushma Swaraj’s desi version of the power jacket over the sari.


His regime of yoga and meditation helps him sleep less but sleep efficiently and his penchant for yoga nidra is now something other members of the establishment are hoping to emulate. So it was no accident that the video showcased the manicured greens in the country’s most powerful home, a leader at ease in solitude, whether taking a constitutional or preparing to meditate, a man in harmony with the elements around him

Clothes tell some of the story our politicians want us to hear. Modi doesn’t leave it to chance. The half-sleeve kurta, he has said, was his way of saving space in his jhola in the days he washed his own clothes. His jhola is a recurring motif in his narrative: “Hum to fakir aadmi hain ji, jhola lekar chal padenge ji [I am a fakir and can walk away with my jhola],” he has said on several occasions. All those with criticisms of his Rs 10 lakh personalised pinstripe suit are made aware of the transience of power. Yes, when he represents India’s billions, he must dress the part, but when he is himself, he will be the fakir, the pracharak, the samaj sevak.

Pitted against the saris handed down over generations from Indira Gandhi to Sonia Gandhi to Priyanka Gandhi Vadra, it tells the story of a new India where power is not a family business and there are no hand-me-downs to look the part. It is something middle India relates to, just as they relate to variations of the humble gamchha, in all its regional variations, being used as a face cover by the Prime Minister during Covid-19. And if we had forgotten the variety of his attire because of the absence of foreign travel, Modi gave his followers a special treat: five changes during the 1.47-minute video of the Prime Minister and the peacock, ranging from the lightweight lavender shawl over the kurta-pyjama to the track pants paired with t-shirt and gamchha.

The message is very clear. Modi at 70 is fighting fit. His regime of yoga and meditation at 5 AM every day helps him to sleep less but sleep efficiently and his penchant for yoga nidra (sleep induced by guided meditation) is now something other members of the establishment are hoping to emulate.

So it was no accident that the video with the manicured greens in the country’s most powerful home, a peacock dancing in attendance, showcased a leader at ease in solitude, whether he is taking a constitutional or preparing to meditate, a man in harmony with the elements around him. It is a strong message to send out to a world that is tossing and turning, looking for comfort and ease in the cocoons-turned-prisons of their own homes. It suggests that no matter what, the country is in safe hands.

And when he did appear in public in Ayodhya, he was dressed in shades of saffron, in dhoti-kurta, moving from one temple to another, mask in place, appropriately sanitised and a fluid dandavat pranam as offering. The image, reinforced again, discipline and power, but above all, it was meant to recall the way he bowed and touched his head to the steps before entering Parliament in 2014 upon becoming Prime Minister. Ram Rajya, that began in the heart of the constitutional centre, was coming to fruition at its civilisational abode. For his army of believers, the master of the gesture and the garment was the only man who could have made it happen.