They have added new momentum to India-US ties 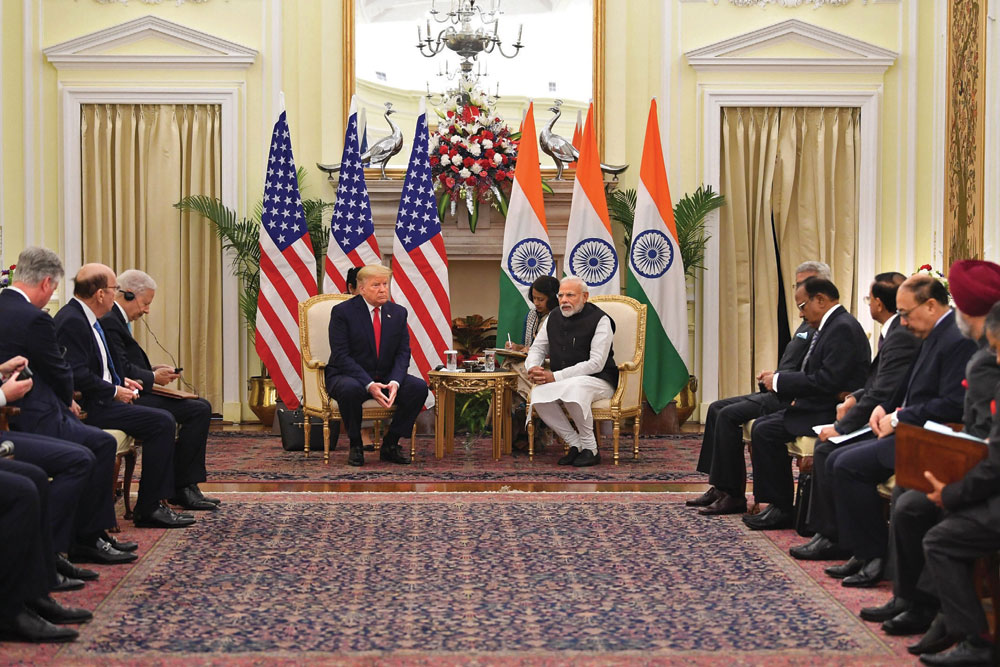 Donald Trump and Narendra Modi with their delegations in New Delhi, February 25


THE ENTHUSIASM WHICH MARKED President Donald Trump’s acceptance of Prime Minister Modi’s invitation to visit India did not come as a surprise. President Trump will face Americans once again, as he seeks re-election, on November 3rd. The campaign for his re-election is going to be a grinding, ‘no holds barred’ event. Trump had to fight tooth and nail to prevail over Hillary Clinton in the presidential elections four years ago. While Clinton secured more votes, Trump won the elections on the basis of electoral-college votes, by winning in key states in the country. Trump’s first term as President has been marked by controversy. He even suffered the ignominy of facing impeachment proceedings, where he was bailed out by fellow Republicans who had a small majority in the Senate. His visit to India was announced almost immediately after the Senate vote.

Trump’s first term as President came amidst a huge change, in how a large section of the country’s White majority viewed globalisation of the world’s economy. Globalisation was seen by them as disastrous for their welfare—and even for their livelihoods. With the American market swamped by cheap imports from China and elsewhere, in goods ranging from sophisticated electronic products and cars to toys and toiletries, the White working class was swamped by growing deindustrialisation. Even key traditional industries like cars started going to Japanese, German and South Korean manufacturers. Moreover, the market was swamped by textiles from across what Trump describes as the Indo-Pacific Region. Textiles from countries like Vietnam and Bangladesh made these countries household names in the US. Globalisation soon became a swear word for the White American working class. Trump read this phenomenon accurately. He began his term by withdrawing American participation from the Trans-Pacific Partnership, a free-trade area extending from the western shores of the US to the eastern shores of the Indian Ocean.

The world started moving towards a new era of increased protectionism. The Trump proclamation of ‘America First’ found resonance in American allies in Europe and even India. These were countries hit hard by Trump’s moves, designed to protect American industries, in areas like aluminium and steel. This, despite the fact that India’s trade surplus with the US was barely around $24.3 billion, as compared with the Chinese trade surplus of $350 billion. China’s and America’s allies soon felt the brunt of the new American crusade against the norms set by the World Trade Organization (WTO). India retaliated to Trump’s actions in areas Trump was most protectionist about, notably targeting American agricultural products like almonds, chickpeas and wheat. While efforts have been made to reduce these differences, the road ahead is not going to be easy.

India’s response to Trump’s personal request for reducing duties on Harley-Davidson motorcycles could, however, have been more imaginative. Milwaukee in Wisconsin, where these motorcycles are produced, is of considerable importance for Trump’s re-election effort. He has a personal interest in backing the producers there. The US and India have, however, pledged to move quickly to address trade issues expeditiously. One hopes India will not hand out unilateral concessions till its concerns on restoration of its WTO-entitled Generalised Scheme of Preferences (GSP) are addressed, with an emphasis on its exports of steel and aluminium. We are, at the same time, meeting Americans more than halfway, by increasing imports of oil and natural gas, to balance what they claim is their high trade deficit with India.

Prime Minister Modi drew up Trump’s programme in a manner which ensured that even if the results were modest, the visit would ensure that Trump could claim the support of millions of fans and admirers in India. The enthusiastic reception by huge crowds enables Trump to tell his people that his diplomacy has won thousands of friends in India. It was, however, Trump’s wife Melania, whose programme with Indian school students, and his daughter Ivanka, whose charm and informality were endearing, who captured hearts in India. In the meantime, Trump combined some candid talking on issues like the Citizenship (Amendment) Act with gripes about India’s trade policies. But Trump also won friends with his frank references to Pakistan-sponsored terrorism, which were duly balanced by remarks seeking to keep his channels of communication with Imran Khan open. But he never missed an opportunity to welcome and praise India’s democratic traditions. He also impressed and pleased his Indian interlocutors by his blunt references to China, its mercantilist policies and its propensity to use coercion and force to fulfil its unjustifiable territorial claims on its maritime boundaries with virtually all its maritime neighbours.

Despite differences on trade, which will hopefully be sorted out in some measure, in the coming months, the two countries can be satisfied with their growing cooperation in the field of energy. Imports of American oil and natural gas by India are set to grow, as US production of shale oil and natural gas increases. Commercial agreements have recently been signed for enhancing energy cooperation, with crude oil and liquefied natural gas (LNG) imports from the US reaching $3.6 billion a year ago. US companies like Exxon and Chart Industries are now set for an expansion of LNG supplies into new areas. More importantly, after taking the lead, in cooperating with and then ending the supply of nuclear power generators to India, the US now appears set to return to the field of nuclear energy in India. Negotiations have reached an advanced stage for the construction of six nuclear reactors by Westinghouse America in Andhra Pradesh, after the company was backed strongly by the Trump administration. These reactors will supplement nuclear power reactors installed in Kudankulam, Tamil Nadu, by Russia.

An important feature of the Trump visit has been the growing emphasis by both countries that they will expand military cooperation by purchase of new, highly potent weapons systems, including state-of-the-art Apache attack helicopters. Moreover, for the first time, the two countries took direct note of Chinese territorial aggression across the South China Sea. It was agreed that maritime cooperation within the ‘Quad’, comprising India, Australia, Japan and the US, would be enhanced. India and the US would complement their efforts for economic cooperation and assistance to third countries, much in the manner that they are already doing, together with Japan, in countries like Sri Lanka and Maldives. There was also a veiled criticism of China’s propensity to fashion its aid programmes to ‘trap’ recipients in debt and then take over control of the project area, as it has done in Sri Lanka’s Hambantota Port. India and the US noted that they recognise that ‘to contain the build-up of sovereign debt in developing and low-income countries, it is important to ensure responsible, transparent, and sustainable financing practices for both borrowers and creditors’. There was also a pointed reference to the importance of determining maritime boundaries according to international law—something the Chinese refuse to do.

After showing considerable patience and restraint in its relations with China, New Delhi is now showing signs that it will respond more strongly than in the past to Chinese hostility in international forums like the UN and the Financial Action Task Force on issues like Kashmir. China is aware of the cooperation between India and Japan on economic policies in countries like Myanmar, Sri Lanka and the Maldives to deal with Chinese attempts to build strategic presence and military bases there. The announcement that India would cooperate with the US on such issues will be seriously taken note of in China. New Delhi also recognises that given the need for Pakistani cooperation for a smooth exit from Afghanistan, the Trump administration is going to alternately ‘blow hot and blow cold’ when it comes to dealing with Pakistan. Withdrawal of American forces from Afghanistan before November 3rd will certainly boost Trump’s prospects of getting a second term in office.

Trump’s visit to Ahmedabad, Agra and Delhi can be regarded as having been successful in giving a new momentum to India-US ties. But two major challenges remain for developing a reinvigorated structure for security across the Indian Ocean Region. The first challenge pertains to the growing and genuine concern, particularly voiced by the liberally oriented Democratic Party in the US, about the prolonged arrest and detention of hundreds of mainstream political leaders in Jammu and Kashmir. These are people, they say, who have never resorted to violence. The second is the continuing denial of telephone and internet services to ordinary people and particularly to students in Jammu and Kashmir. India, they aver, is held in high respect internationally because of its abiding commitment to democratic freedoms, which have now been discarded by these actions. Many in India would agree with them. 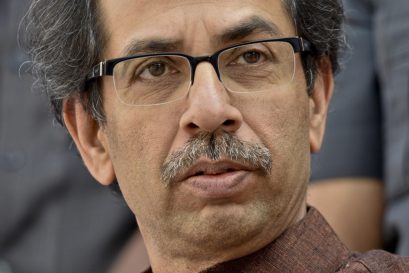 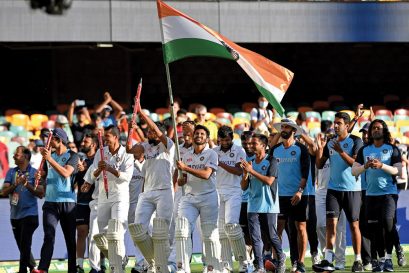