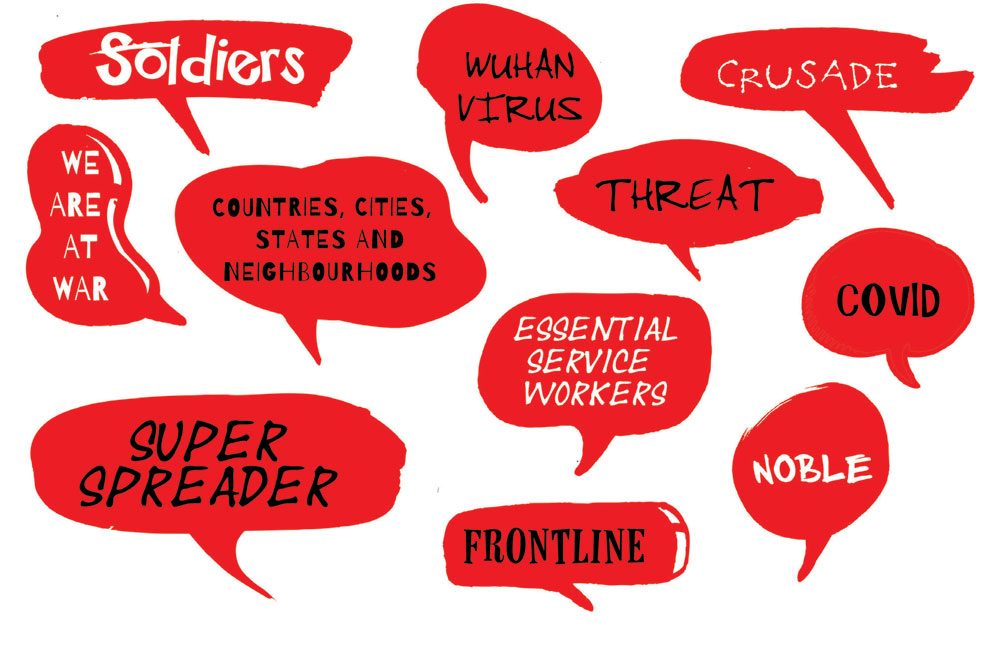 
TODAY ACROSS THE globe ‘we are at war’ with Covid-19. We hear of ‘frontline’ workers being ‘heroes’ and how Covid ‘suspects’ have broken out of quarantine and are a ‘threat’ to all others. We denounce ‘super spreaders’, we applaud the Covid ‘warriors’. As we frame our present predicament into words, we must also heed the consequences of vocabulary and language. If speech can inspire, embolden and empower, it can also harm, humiliate and shame. The narrative sets early on and after that, despite resistance, it becomes harder to modify, let alone, upturn. The use of war metaphors appears practical at first. After all, we are all facing a common ‘enemy’: the virus. But it carries its own insidious baggage. The weight of which is becoming increasingly hard to ignore.

If we are in a state of war, then we are no longer citizens. We are soldiers. And no one asked us if we were okay with this. To be a soldier is to follow rules. To be a citizen in a democracy is to question. To be a squaddie is to obey the superior. To be a citizen is to demand answers from those in power, to hold oneself and others accountable.

As leaders across the world respond to a common pandemic, heads of states are proving whether they are Generals or Presidents. The Generals will hold press conferences where they swish away persistent journalists or will choose to hold no press conferences at all and will merely set out diktats for a billion people to follow. And then there will be the Presidents, those who use science and data and explain to the citizens, and even to children, why a lockdown is necessary. A Trump and a Modi choose a language targeted at soldiers. Soldiers do. A Merkel or Ardern speak to citizens. Citizens ask why.

To say we are at war means declaring an enemy. And while Covid is the leader of the pack, we are now seeing the emergence of various other ‘enemies’. On April 21st, Donald Trump tweeted, ‘In light of the attack from the Invisible Enemy as well as the need to protect the jobs of our GREAT American Citizens, I will be signing an Executive Order to temporarily suspend immigration into the United States!’ And there in one fell swoop, Trump identifies his two opponents: the virus and the ‘collateral damage’, the immigrants. In India, the vocabulary of war has been used to demonise an entire religious community. The use of ‘#Coronaterrorism’ and ‘#CoronaJihad’ fuels a communal fire.

To adopt a vocabulary of war is to create division and forego solidarity. At a time of a pandemic, people need to come together. Instead we see countries, states, cities, villages and neighbourhoods trying to keep the ‘outsider’ out. If we thought in the 20th century we were turning into a borderless world, the opposite is unfolding before us today. It is each country for itself. Each state for itself. Each neighbourhood for itself.

Susan Sontag, the author and philosopher, wrote the most landmark work on the perils of language used to describe the disease and those who suffer from it. In Illness as Metaphor (1978), she wrote as a cancer patient herself at the time, how metaphors and myths around certain illnesses just add to the patient’s suffering. She wanted to show cancer (and later AIDS) for what it was—a disease, not a curse and not a shame. She writes: ‘There is the ‘fight’ or ‘crusade’ against cancer; cancer is the ‘killer’ disease; people who have cancer are ‘cancer victims.” Ostensibly, the illness is the culprit. But it is also the cancer patient who is made culpable. Widely believed psychological theories of disease assign to the ill the ultimate responsibility both for falling ill and for getting well.’

Today, the same is happening with coronavirus; the patient is being held to blame. And this time, the culpability is far worse because of the contagious nature of the disease. With quarantine notices being stuck on doors and stamps embossed on wrists, the public shaming of the patient is made complete.

Sontag continues, ‘Any important disease, whose physical etiology is not understood, and for which treatment is ineffectual, tends to be awash in significance. First, the subjects of deepest dread (corruption, decay, pollution, anomie, weakness) are identified with the disease. The disease itself becomes a metaphor. Then, in the name of the disease (that is, using it as a metaphor), that horror is imposed on other things.’

What Sontag wrote nearly 40 years ago can be perfectly mapped onto coronavirus today. It is an important disease, bringing the globe to a standstill. It has no certain cure. Scientists are still figuring out its origins. We know it is zoonotic, but how did it pass to humans? By calling it ‘Chinese virus’ or ‘Wuhan virus’, our horror of the disease is transferred to our discomfort of the ‘other’, which we are now given a free pass to express.


In India, those from the northeastern states have been denied entry to shops and even been spat upon by passing bikers because they are seen as carriers of a ‘Chinese virus’. The power of words and the role of language cannot be underestimated when it comes to creating divisions. If actions can harm, words wound

The World Health Organization put out a note to the media in 2015 asking that ‘best practices be followed in naming new human infectious diseases to minimize unnecessary negative effects on nations, economies and people’. Five years later, we can observe the repercussions of names. In India, those from the northeastern states have been denied entry to shops and even been spat upon by passing bikers because they are seen as carriers of a ‘Chinese virus’. The power of words and the role of language cannot be underestimated when it comes to creating divisions. If actions can harm, words wound.

The language of the pandemic, as is the case with war, also creates its own battalion of heroes and enemies. In a moving interview, Barkha Dutt speaks to Dr Pradeep Kumar who had to bury his doctor friend who died of coronavirus in Chennai, as burial grounds refused fearing contamination. With his voice cracking and tears welling, Kumar says, “I am not a hero, trust me, I am not a hero, just a human. If being a human makes someone a hero, then humanity has died that day.”

Today, as a society we are quick to anoint health workers and sanitation workers as ‘heroes’. But to do so is to absolve oneself of responsibility and place it in the hands of someone who hasn’t asked for it. By calling essential service workers ‘frontline workers’, we put a target on their back. We push them to the fore without accepting our own role in what is playing out.

This abdication of responsibility is best spelt out by Karleigh Frisbie Brogan. A grocery store worker, he writes in The Atlantic (April 18th, 2020), ‘Cashiers and shelf-stockers and delivery-truck drivers aren’t heroes. They’re victims. To call them heroes is to justify their exploitation. By praising the blue-collar worker’s public service, the progressive consumer is assuaged of her cognitive dissonance. When the world isn’t falling apart, we know the view of us is usually as faceless, throwaway citizens. The wealthy CEO telling his thousands of employees that they are vital, brave, and noble is a manipulative strategy to keep them churning out profits.’

We are all guilty of this. We call the subziwallah and the kudawallah ‘noble’ and ‘brave’, but do we wish to switch roles with them? Brogan recognises our hypocrisy with acuity. On the one hand, we will clap for our health workers; on the other, we do not allow them to be buried with dignity. On the one hand, we might celebrate the sanitation worker; on the other, we turn a blind eye to the precarious plight of millions of migrant workers. He continues, ‘The anger I have is not toward my boss, or my boss’s boss, or even that guy’s boss. It’s toward an unfair system that will never change if we workers don’t question the motivations behind such mythmaking.’

And therein lies the rub. We need to destroy this mythmaking. We need to see beyond the oversimplified binaries of ‘enemy’ and ‘hero’ and renew language so that we cause no harm with it.