What it means to live in a hotspot

Coronavirus has familiarised everyone with the concept of uncertainty 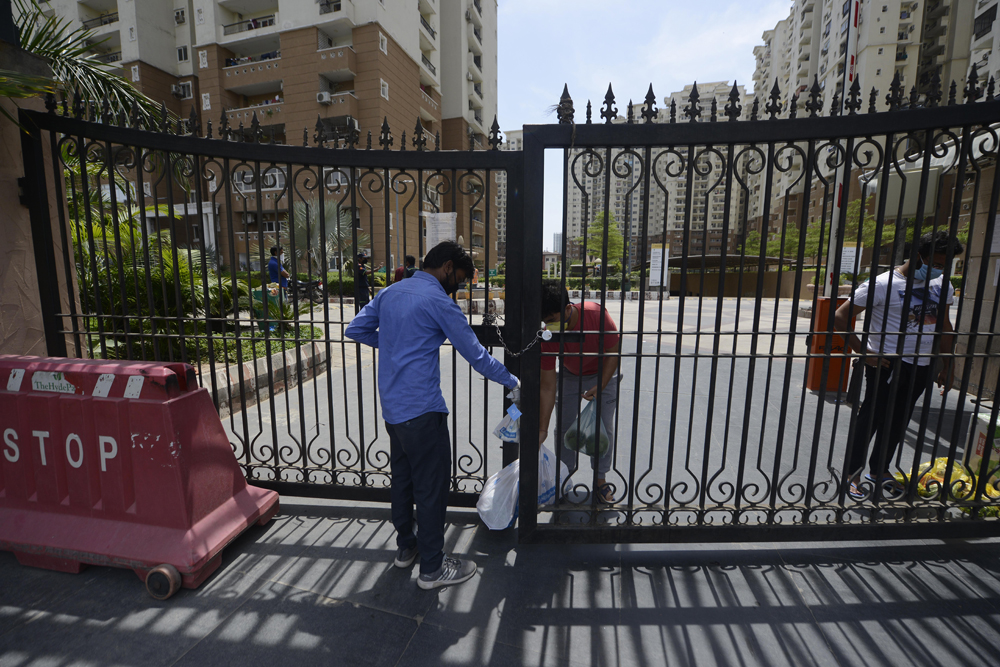 One night, in the midst of the lockdown, as hundreds in a residential complex may have been about to have dinner, a message from the society management broke the news that a person in the complex had tested positive for Covid-19. The area was immediately sealed. Protocol followed. Sanitisation was carried out. Tighter norms were put in place for movement of residents and buying essential commodities.

The complex was added to the list of hotspots. The next day there were clear guidelines—no one should be seen walking, even dogs should be walked just outside the building where the owner lived, masks were mandatory, only people on the higher floors should use lifts, a truck would come to sell vegetables, milk would be delivered at home and anybody with a health issue could leave the premises only in an ambulance. There was a chilling silence broken by the even more chilling sound of police sirens twice a day. Their loudspeakers warned people against moving out. It felt like the virus was lurking all around, in every corner.

Outside the main gate, which was the only source of entry for provisions ordered over phone or online, police watched every movement. There was a strange solace in driving up to the gate to pick up essentials. That three-minute drive was an act of normalcy outside the queer, new routine.

It was unsettling. But, two buildings and half-a-kilometre away, if we could feel this way, what would the Covid-19 patient and his family be going through? In times of coronavirus, the agony always turned out to be relative.

A week later, there was more sad news. Four members of the family of the Covid-19 patient had also tested positive. The infection had initially come from attending on a relative admitted for an operation at a Delhi hospital. The sedateness of the virus sank in, in a way no report or rise in number of cases did. It had a way of creeping into the conscience and quietude of the mind. What if one got infected in some way (articles poured out on the ways it could or could not) and passed it on to someone at home? It was not just the dread of the unknown virus. It was the guilt, stigma, ostracisation and unpredictability. It was hard to imagine what the family which tested positive was going through. It was no fault of theirs. It could have been anyone. It could have been us.

The complex had fallen into the ‘red zone’. No one could say till when. Newspapers were delivered at the main gate. It also gave people a reason to get out of their homes and breathe the morning air while walking to the gate. Since dogs had to be walked within the complex, pet owners were repeatedly warned that they should clean their poop. Vegetable trucks were sent in to various towers and people lined up maintaining social distancing. From behind masks, one wasn’t sure who was smiling. One could not say if chores engulfed the day or the other way round. At the end of the day, one could just hope to get out of coronavirus times unscathed. The rest could be put behind and what the future brings would be dealt with then. The warm lights filtering through the French windows of the apartments at twilight underlined the gravity of the ‘stay safe, stay home’ messages that one had often taken for granted.

Human resilience was on test, more psychologically than physically. Life went on. One could only tick off days, hoping we were nearing the end of the tunnel. Two weeks later, there was good news. The entire family was recovering. It brought relief in the sombre silence.

Residents were getting essentials delivered at the gate. Then one night, a message from the society management read that someone had ordered liquor. The message warned against it. The following morning the vigil at the gate had been tightened. A cop turned away a person who was supplying dog food and medication saying he did not have a valid pass. Considering that nearly half of Gautam Buddh Nagar district had been sealed, getting such things had become difficult. One of the four cops sitting outside said they were not taking chances because residents had started ordering liquor.  Another cop said someone had ordered white wine. One cop complained that people were ordering mutton and chicken. Asked why that should be forbidden, he said in times of coronavirus, people should avoid non-vegetarian as the virus was known to have come from bats. They finally, however, allowed the pet shop person to deliver the stuff.

That evening there was reason to celebrate in the society. The Covid-19 patient and his entire family had tested negative twice and were returning home. A message from the society management suggested that people switch on their balcony lights and clap to welcome them. The residents did. As they got off the ambulance and walked home with masks and gloves, there was music, applause and shouts of “welcome home”.  It had, somehow, mitigated the stigma, and hopefully, their apprehensions. One wonders how many eyes may have filled with tears seeing that family return.

The same night there was another encouraging message. The complex had been moved from ‘red’ to ‘orange’ zone. No one knew yet how it would change things. But then coronavirus has familiarised everyone with the concept of uncertainty. It can be taken as doom or hope. That night the residents may have slept peacefully.