Where Men are from Venus

The Delhi HC has said men who have consensual sex with men are not criminals anymore. But at Love Life Society, a network of HIV positive homosexual men, liberation means much more 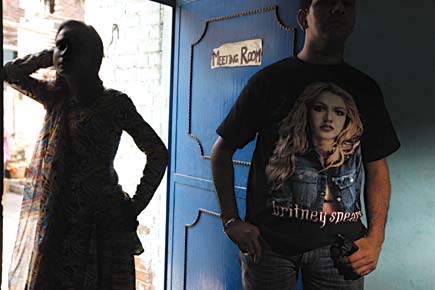 At Love Life Society, liberation means much more than the recent Delhi HC ruling on homosexuality


“O.P.E.N,” reads out Taslima haltingly from the visiting card handed to her. What does it mean, she asks. When told, she smiles shyly. “Achcha naam hai (nice name),” she says. A while later, she says, “My life… open.” She repeats it. “My life…open.”

Taslima lives next door to an office that goes by the name of Love Life Society. It is a small two-room space where Taslima meets a lot of people like herself. She is part of a community known by the acronym MSM, that is, males who have sex with males.

Every Sunday afternoon, people from the community gather in this house, on a narrow street in New Delhi’s Shastri Park, to sing, dance and to talk. That brings us to the other much misunderstood three-letter acronym that brings them together: HIV. Love Life Society is an HIV positive MSM network with over 600 members. But not everyone comes for the weekly meetings. Especially not ‘high profile’ members, who prefer to remain anonymous. They are visible only at ‘cruising places’, where they go to buy sex.

On Sunday, the meeting room bustles with realities ignored by the mainstream and denied by the law—till, of course, a few days ago, when the Delhi High Court legalised homosexuality in the city. It is a space where sexuality is fluid. And definitions irrelevant. There are MSMs who are married to women, there are male sex workers, there are kinnars (eunuchs), and there are men who live with other men. There are men who dress like women, men who dress like men, men who identify with women and men who don’t consider themselves ‘gay’.

So what are their stories, their struggles, their joys? How much can two afternoons spent with them reveal? Plenty.

Mohan, 29, dressed in black T-shirt and jeans, is among the first to arrive. Married, with a son, he took on a lover (whom he refers to as his girlfriend) a year ago. His lifestyle, he says, requires him to be constantly vigilant of being infected. “Suppose my girlfriend is HIV positive? I have to take the necessary precautions. We shouldn’t infect each other.” His life is a constant negotiation for time between his two lives. “I had to make my wife understand that my lover is my close friend. My girlfriend and I meet, we share our lives. When she falls ill, I go and take care of her. And I support my family as well.”

Jagdish, a counsellor at the Society, explains the predominant sexual identities in the MSM community, commonly referred to as the kothis (overtly female) and the giriyas (who play the traditional male role). “A man who wants to be loved like a woman, who feels shy and wants to be taken care of is labelled a kothi. Then there are men who want to perform the role of a husband or boyfriend. They are referred to as giriyas.”

Ravi, also a counsellor, explains further. “At home, they are forced to play the traditional male role. When they come here, they dance, sing and take on their female identities. When they return home, they go back to pretending. The freedom they experience here, they don’t find at home.”

Nagesh, a tailor, feels trapped by the role demanded of him by his family. He has four daughters. He is afraid that if he comes out, his wife will leave him and the future of his daughters will be compromised. So, at home, he plays the role of the husband. With his lovers, he becomes the woman. “Aise mil jata hai koi, toh enjoy kar lete hain. Par ye bhi dekhna padhta hai ki sab ko pata na chale. Izzat toh rakhna padhta hai. (I enjoy sex with men. But I can’t let the world find out. I have my honour.)” He says he envies the kinnars who have no one to answer to and live life as they please.

Ravi begins to play the dhol, and Nagesh, dressed in shirt and trousers, puts on the ghoongru and takes to the floor. The kinnars begin to sing. And the meeting suddenly turns boisterous, with people egging each other on to dance and sing. And so, an hour-and-a-half passes.

Learning to live with dignity within their own families is a struggle for most members. More often than not, that is where the discrimination begins. There are instances of HIV positive MSMs being beaten up and thrown out of their homes. Very often, an HIV positive MSM denies his positive status or begins to isolate himself. Either way, he begins to feel like even more of an outsider. Support group meetings at the Society try and bring back some degree of normalcy to their lives.

“The voice of MSMs with HIV is often not allowed to be heard. The endeavour is to give them a platform to talk about their lives and stand behind them in the battles they have to fight at home and outside. He needs role models to rebuild his life. And that, he finds here,” says Firoz, one of the founder members of the Society. At meetings, no one acknowledges another’s HIV status. Even within the Society, respect for another’s privacy is paramount.

Even at treatment centres—STD (Sexually Transmitted Diseases) clinics, ART (Anti-Retroviral Therapy) centres and government hospitals—MSMs find themselves discriminated against. The Society refers them to hospitals, assisting in quicker and better access to treatment.

The second Sunday. It is half past two and not many people have turned up for the meeting because of blazing temperatures outside. The kinnars begin their song and dance routine. The previous Sunday had drawn in a bigger crowd. There was Asim, who prefers to call himself Zubaida. “Ask your questions unhesitatingly,” she said. “I will tell you everything you want to know.”

Zubaida’s lover of eight years lives off her. He also beats her up often. Dramatic with her words and demeanour, Zubaida says, “Main dil se majboor hoon. Mein chhod nahi sakti unko. (I love him. I can’t leave him.)” She makes money dancing at weddings and gate-crashing houses where there has been a birth. She sometimes does khanjra (sex work), for which she earns anywhere between Rs 50 to Rs 200 per job. Sometimes, Rs 500.

Is she not scared of contracting the virus? “Sex toh insaan ki zaroorat hai. Jab se hum sanstha mein aane jaane lage, tho humein jaankari hui. Toh hum condom use karne lage. (Sex is a need we can’t deny. But since we’ve started coming to the Society, we’ve realised the dangers of unprotected sex. We use condoms now.)” Zubaida now works as a peer educator for an NGO that is based in her neighbourhood. She distributes free condoms and educates members on safe sex.

Affairs of the heart come up a lot during the meetings. Ex-boyfriends, broken hearts, new lovers, there is no dearth of romance or drama here. There is no holding back of tears or laughter or anger. There is much bonding that happens between the members.

And there are silences too. Some sit around wrapped in their own worlds. Mohan, now a staffer with an international NGO, has lived through that loneliness. In 2003, he tested positive. “I came home and cried my heart out. My family cried with me. I had to explain to my wife that there was no cure for this illness.” Mohan’s wife stood by him through his worst times despite his long-standing affair with another man. Mohan had to fight his way out of depression to become a responsible father and husband. “It is my dream to see my daughter grow up. She is six now. I want her to get to know me well and understand me. I want her to study well and find a good husband.”

This particular Sunday happens to be the monthly board meeting day of Love Life. The challenge of finding staff for salaries that are less than attractive continues. “Attitudes of the majority towards MSM and HIV are very extreme. Not everyone is willing to mix with this community,” says Francisco De Melo, Society president.

(Some names have been changed on request)