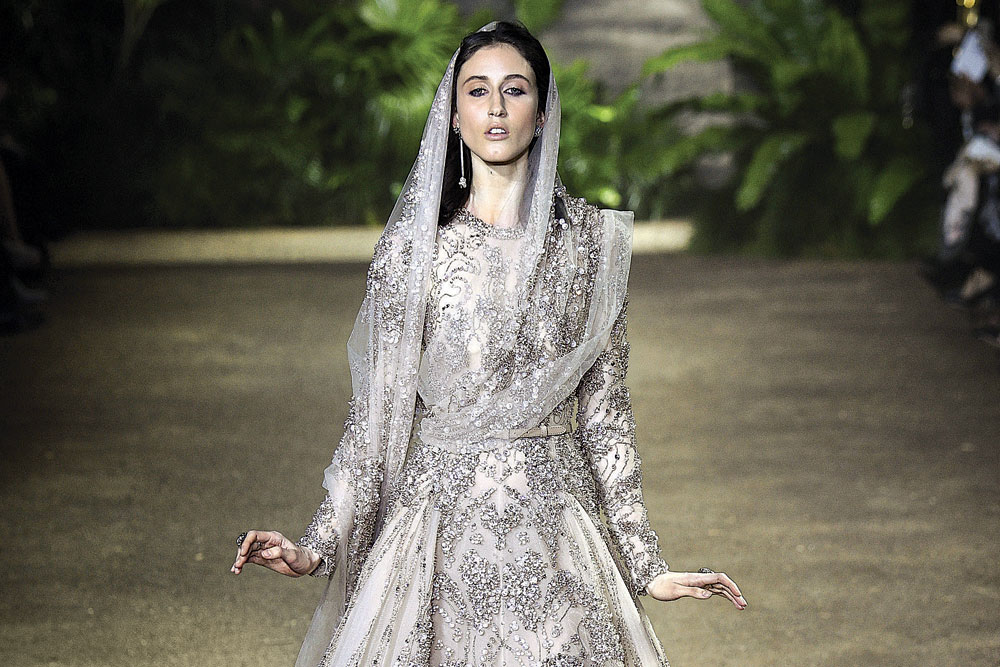 WHEN BRITISH ROCK band Coldplay released a music video earlier this year, it made news for everything but the music. Set in India, the video featured lead singer Chris Martin doing ‘Indian’ stuff, such as playing Holi on the streets armed with a full band, singing on top of a terrace in the old part of the city, riding a black-and-yellow cab driven by a Sardarji, and hanging around in old forts dreaming about peacocks and Bollywood stars. It also featured pop icon Beyoncé wearing an Abu Jani Sandeep Khosla anarkali gown, a dupatta on her head, a mathapatti (jewelled headgear) and hennaed hands, and a short cameo by Sonam Kapoor playing a mysterious, dark-eyed village belle.

Almost immediately, the backlash began. ‘Cultural appropriation,’ clamoured the critics, a buzzword in pop culture these days. Denoting the adoption of elements of one culture by another, it’s controversial when a dominant culture uses symbols of a minority or dominated one and takes on—as author Greg Tate puts it—‘everything but the burden’. What got the critics’ goat was the liberal use of Hindu religious symbols and Indian cultural identity in the video of Hymn for the Weekend as an exotic backdrop to the (White) hero’s journey without any perspective of or insight into their real meaning. How often does a little boy paint himself blue, dress up as Shiva and sit on a porch alone with his trishul? How many saffron-robed sadhus really roam the streets of Mumbai? Do Bollywood actresses have dark skin, light eyes and blonde hair? Do Indian women wear outfits with necklines that plunge down to the waist? And come on, who wears a mathapatti on the face?

In Coldplay’s defence, the video was far better directed than Lean On made a year ago by Major Lazer and DJ Snake featuring Danish singer MØ in the lead. It was one of the biggest pop sensations of that year, and the video—featuring, you guessed it, Indian dancers, old forts and elephants—went on to become one of the most watched videos on YouTube (1.4 billion views). Never mind that the brown-skinned dancers were wearing the Malayalee kasavu sari draped in the Maharashtrian nauvari way, or that people were dancing on top of colourful buses as if it was the most natural thing in the world. Those are just details. Both videos were miles ahead of Australian rap artist Iggy Azalea’s 2013 Bounce, which featured her in a red lehenga at an Indian wedding, and—hold your breath— dressed like a gold-plated goddess on top of an elephant. A little exaggeration in the name of art is okay, isn’t it?

Except, for some, it isn’t. In all three songs, the videos were contextually unrelated to the lyrics or music, and merely provided hypnotic visual entertainment for their millions of online viewers, without any depth or understanding of Indian culture. If anything, critics warn, they further stereotyped India as the land of ‘slumdog millionaires’, where poverty lies easily with colour and mystique and where snake-charmers abound. Urban, internet- savvy global desis did not like the idea. In retaliation came online anti-appropriation rebellions such as one hashtagged ‘reclaim the bindi’ by Indian women who argued that White pop stars like Madonna and Miley Cyrus (or Black, in the case of Beyoncé) who used bindis as a stage prop, and high-street brands like Claire’s who sold it as a fashion accessory, were doing a disservice to the ancient symbol. “My culture is not your aesthetic,” they insisted. When it comes to fashion, however, where does inspiration stop and appropriation begin?

LET’S FACE IT. India is a mind-boggling land, a rich culture with a heterogeneous identity and a nuanced past and present that is bound to attract any Western artist’s fancy. Fashion designers are no exception, and Western fashion has been inspired by Indian aesthetics for decades without sloganeering and hashtagged rebellion. Is it appropriation when French haute couturier Jean Paul Gaultier uses the Sikh turban in a menswear collection atop suits with panelled sailor’s trousers, and horizontal- striped tees paired with vertical-striped pants? Or when, in the same season, spring 2013, New York-based label Marchesa also sprinkles a liberal dose of India in its brocade fabrics and sari- inspired one-shoulder gowns? How about when Chanel’s Karl Lagerfeld decides to create the ‘Paris version of India’ and comes up with ‘Paris-Bombay’ set in the Grand Palais featuring metallic saris, floral motifs, maangtikkas and kohl-rimmed eyes?

Certainly nobody would raise an eyebrow if a Western brand were to evoke a certain culture for a limited-edition, locally available collection—such as when French luxury giants Hermès created saris for Indian buyers, and Louis Vuitton came up with a Diwali collection featuring Benarasi brocade dresses. No one seemed to mind when the Italian label Dolce & Gabbana made abaya-gowns for their substantial Middle Eastern clientele either—business is business, after all. But such instances are few, and—contrary to the exclusivity of geography in the past—the bulk of luxury marketing is about global availability now. When a designer creates a collection, it must appeal to an international audience; it must communicate its inspiration while evoking a desire to reach out for a credit card. Like a smile, it should transcend language. It has to be both exclusive and universal, both exotic and aspirational. A benign, colourful culture like India happens to fit the bill sweetly.

One look at the latest collections worldwide would yield gorgeous examples. Spring 2016 in Milan saw the iconic menswear designer Ermenegildo Zegna throw in a bit of Madras checks and baggy pants not unlike the Indian pajama along with suave suits and exquisite cashmere. Around the same time, Elie Saab came up with a collection dedicated to the land of one of his best- known clients, Aishwarya Rai Bachchan. With a few elegant strides up the Cannes red carpet in his clothes, the Bollywood diva has given the 51-year-old Lebanese designer more publicity in the world’s largest democracy than any marketing blitzkrieg ever could. Duly inspired, Saab’s couture 2016 collection saw embellished, glittery sari-draped gowns, a salwar kameez and even a pallu worn on the head of the showstopper. The effect is so stunning, it would be a shame to write it off as appropriation.

The same season, adding weight to the ‘haute Bohemia’ mood, French label Isabel Marant also came up with a chic collection inspired by Rajasthan, featuring block-prints, harem pants, billowy tunics and metallic leggings reminiscent of the churidaar kurta Indian women wear. For autumn-winter 2016, the young, dynamic New York based label Altuzarra has just presented an India-centric line, with flower patterns and paisley prints on flowing dresses that have supposedly been inspired by India of the Raj.

One could argue that these clothes are globally relevant, that the mere addition of a foreign aesthetic—a print or an embroidery or silhouette—does not make them ‘appropriation’, that fashion is all about inspiration after all, and that designers are only getting better at it. Dolce & Gabbana’s spring 2016 menswear show was a vision in chinoiserie, conjuring up Chinese dragons, bamboos and peacock prints with hints of geisha silhouettes, and no one in China complained. At the same time, young American designer Christian Siriano dwelt on the hues and flavours of Morocco, with drapes evocative of hijabs and flowing silk gowns. Chanel’s cruise 2017 collection presented last month was not only inspired by Cuba—panama hats, Cuban cigars, 1950s Cadillac prints, candy- coloured organza frocks—it was even set in Havana soon after President Obama’s first visit, making Chanel the first European house to stage a show in Cuba after Fidel Castro took over in 1959. The show hosted 600 (mostly celebrity) guests flown in from around the world, and presented 86 looks on Havana’s main thoroughfare. Forget appropriation, it was a complete takeover of the colourful old Caribbean city. And since business is business, the event was appreciated not scorned, and Chanel’s contribution to the local economy and Cuban tourism was appropriately ooh-la-la’d over.

BUT INSPIRATION IS a two-way street, and if Western designers have been looking East of late, Indian designers have been looking West too. Indian fashion’s most famous fashion export Manish Arora has liberally sprinkled his wildly colourful creations at Paris Fashion Week with foreign inspiration— from Native American feather facegear in his winter 2015 collection to gypsy silhouettes in spring 2016. There are simply no passport-controlled borders for his kaleidoscopic imagination. Also inspired by Navajo Indians and the Burning Man festival, Indian designer Pia Pauro came up with a zany collection called Riders of the Storm in winter 2015. It featured feathered war bonnets, equine motifs, and traditional savannah tiki applique prints and patterns. But no one revolted against her use of the ceremonial headdress and she got away with it, unlike global lingerie giant Victoria’s Secret, who had to apologise four years ago for its similar use of a war bonnet worn by supermodel Karlie Kloss in a show after activists labelled it cultural appropriation and disrespect to an ancient tradition.

Last year, ace Indian couturiers Hemant and Nandita,who have a global presence and a sizeable celebrity clientele, presented a bohemian collection with poncho-capes and tapestry-inspired florals, fringes and felt hats reminiscent of European gypsies (ironically, gypsies began their journey from India before settling across the Middle East and Europe a thousand years ago). The same year, luxury label JJ Valaya presented an Indo-Russian collection called The Bolshoi Bazaar, which was an exotic confluence of brocade lehengas and czarina headdresses for women, and sherwanis with ushankas for men. The spectacular show was set against the backdrop of a snowy Russian forest, and it’s not the first time that Valaya has looked beyond India for inspiration— the 48-year-old was inspired by Morocco and Madrid in the past.

For spring 2016, it appeared that good ol’ England gave Indian designers food for thought. Gaurang Shah took a detour from his usual traditional silhouettes and came up with billowing gowns and ruffled sleeves reminiscent of the Elizabethan era, using Indian fabrics and textures. Upcoming designer Chhaya Mehrotra took Victorian inspiration for a look that featured crinoline under an ankle-length skirt and a fitted bodice with a lace collared blouse, but made with Indian fabrics and weaves.

In fact, Indian fashion can be held guilty of making an entire industry of appropriation—except we conveniently categorise it as Indianwear and Westernwear. Traditional Indian silhouettes and drapes, along with wedding and occasion wear, go into the former; everything else goes into the latter. Indian men do wear suits, trousers and shirts, and Indian women do wear pants, gowns and dresses, and so designers must cater to all their tastes, not just traditional needs and culture-appropriate dressing. We even have a beach category, including slick resortwear saris by swimwear mavens Shivan & Narresh, and sexy printed sarongs and kaftans by several others, so that Indian women do not make a fool of themselves by the poolside or the beach.

Ultimately, there is a fine line between inspiration and appropriation, and it is lined with wads of currency. When it works— when it keeps an industry and economy going, or simply when it knocks you off your feet with its sheer beauty or art—then society deems it okay to take a little from here and a little from there. If it doesn’t work, or if it’s just not good enough to evoke a revolution of thought, then it is written off as ‘appropriation’. Fashion is business, after all, and the buyer has the final word.