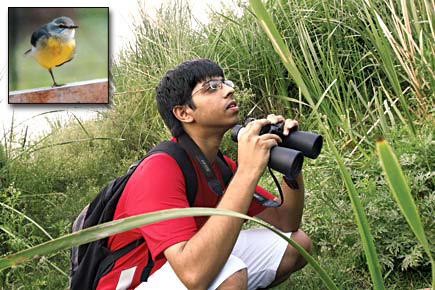 
I’m waiting for my hero to arrive,” says TS Ganesh, his gruff voice gearing down to gentle as he mentions the one-legged yellow bird who flies in from Central Asia to land in his organic coffee farm, 200 km south of Bangalore. Whipping across 2,000 km, on a wing and a stumpy red leg, this 15 gm bird uses astounding avian aeronautics to escape from the clutches of eagles and defy great gusts of winds and mountains. Just so she can spend winter on Ganesh’s farm, Indian Almond, neighbouring the Biligiri Ranganaswamy Wildlife Sanctuary.

The ability to survive such a long journey has earned this grey wagtail a title: Kunta. Though it means lame in Kannada, it’s an affectionate tribute to this plucky migrant who’s overcome her disability with her feathers of steel.

Ganesh photographed a grey wagtail pair hopping about in his garden two years ago. While processing the images, he noticed, “one bird holding a stub-leg up like a crane”. A good host, Ganesh set out rice, ragi and water. But Kunta wasn’t looking for handouts. The wounded flier found her own feed, flies and termites, contently snacking on the porch as Ganesh watched her every morning over the newspaper. That was till May, when the wagtails winged out of Indian Almond, obeying natural migratory instincts.

Hearing a familiar cheerful cheep last October, Ganesh says, “I was shocked to see Kunta again.” After her exit in May, fans of this one-legged-wonder are asking in chorus: “Has Kunta come?”

Grey wagtails return to their wintering location, often as small as a badminton court, year after year with precise navigation. If Kunta survives the forces of nature, she will set her only foot down on Indian Almond this October.

Both Kunta and Ganesh are part of Migrant Watch, India’s first citizen science effort to collect ecological information about bird migration—online. The programme is powered by volunteers tracking one of nature’s largest and most spectacular events, the migration of over 300 bird species, God’s own flying machines, as they arrive from Russia, Europe, Africa and China to touchdown in India, from July to December.

“Arrival and departure dates are an effective way of measuring the effects of climate change on bird migration,” says Suhel Quader, founder of MigrantWatch, a programme funded by the Bangalore-based National Centre for Biological Sciences. “Citizen science can tell us about global warming just by arming people with a pair of binoculars and a little training,” says ecological historian, Mahesh Rangarajan.

New to us, citizen science is highly advanced in the US and Europe. In UK, collective ornithology is a 1.5 million man hours per year effort. The Climatic Atlas of European Breeding Birds is mapping nesting birds against a 3º C temperature rise.

In India just two years of citizen science have transformed shy homemakers, geeks and retirees into skilled outdoor scientists. They are marching out into the great outdoors, taking on the classic pose of nature watchers, feet planted on earth and necks craned up to identify the flutterer between leaves and swooshers in the skies.

Early walkers are certainly getting the birds. Aniket Bhatt, an infotech consultant, was the first to log on to migrantwatch.in in August 2007. He says, “All I could identify were seven rosy starlings in Ahmedabad.” Since then, over 800 volunteer watchers have documented 195 migrant species, landing, living and leaving India, with their sharp-eyed sightings and swift keystrokes. Helping them along are identification markers and pictures on this ‘open access’ online database.

Ramit Singhal, a shy 19-year-old, knows about the birds and the bees as well as everything about birds called bee-eaters. Right from their distinguishing black-eye-stripe to how they feed on wasps without feeling the sting.

Despite being colour blind and a birding novice 18 months ago, this soft-spoken engineering student has recorded 378 bird species across India. Though he can’t tell green from orange, he doesn’t confuse green bee-eaters with brown laughing doves. Size, call and patterns are enough. Quader calls Ramit “a citizen science superstar”.

Walking about in the highly polluted Okhla Bird Sanctuary in Noida, Uttar Pradesh, a wetland stopover for migrant birds where methane bubbles up from the waters, Ramit casually picks out gliding black kites, yellow-bellied prineas and striated babblers on reeds. It’s only the beady gaze of a red-necked falcon that turns him into a gawking teenager, who ogles this awesome raptor loudly exclaiming: “Oh man! This is my first one.”

“Initially, we chose nine species,” says Uttara Mendiratta, coordinator, MigrantWatch. These were picked out for commonness, wide distribution and identifiability. Or, birds outside our windows like barn swallows—the first migrants in July—and rosy starlings, their entire global population winters in India.

The late Indira Gandhi was perhaps our most prominent citizen scientist. Each year when she sighted a black redstart, she’d mail an exultant letter to Salim Ali, the late ornithologist. Snigdha Kar, a Delhi-based climate activist is following in Mrs Gandhi’s tracks. “I’m looking everywhere for the pied-crested cuckoo,” says the young hobby birder. The arrival of this stark black-and-white bird from Africa coincides exactly with whimsical monsoon winds which lift it to our shores.

MigrantWatch is running an online Pied Cuckoo Campaign to ‘investigate’ this cuckoo’s monsoon connection. Since 16 July, six citizen scientists have reported sightings of this feathered forecaster from Karnataka to Haryana. When not looking for the cuckoo, Snigdha needn’t stray far, “I can watch hornbills, blue throats and rosy starlings in the banyan tree in front of my house.”

When bird flyways pass over cities, you can hear the collective flapping by night and see them by day. Last February, this correspondent saw demoiselle cranes fly over the Open office in Delhi, their necks and heads craning out against the setting sun. The smallest and most abundant crane species, demoiselles take one of the toughest trans-Himalayan migrations, to get to south India from northern Russia.

Older than the Himalayas, bar-headed geese from China cover about 1,600 km a day, before landing all over north and west India. They smart pilot themselves over Mt Everest, flapping continuously to prevent their feathers from freezing, even in low-oxygen conditions.

Every year, long distance migrants fly the globe without weather reports, radars, compasses and air hostesses offering them the mandatory peanuts on their mega 1,500–11,000 km routes. Bar-tailed godwits hold the longest flight record. They fly non-stop from Alaska to New Zealand, covering about 11,500 km on a trans-hemispheric-journey, according to a satellite tagging study. Body fat is their only fuel, as they fly without food on their nine-day odyssey. Church bells in Christchurch are rung when godwits arrive.

India’s bar-tailed godwits arrive from northern Eurasia. All migrants come here seeking climes warmer than the harsh Mongolian and Siberian winters. Some are guided by cues such as earth’s magnetic field, which helps them tell north from south; some instinctively follow star constellations. Others track waterways. Some species simply fly when their biochemical glands say go.

“Salim Ali’s work was meant to be a starting point for what we don’t know. With citizen science we’re clearly moving from emotions to the science of conservation,” says Sundar. The waves of migration have started showing up on the database in shaded scatter plots. The August arrivals of black redstarts are plotted in crimson dots across north, west and central India, and the orange spots all over the peninsula denote greenish warblers.

While two years of data isn’t enough to track climate change, global warming is creeping up on us. The pink blanket of flamingoes that covered the mudflats of Sewri in Mumbai is becoming patchy. Himachal’s apple harvest could be 30 to 50 per cent less this year. Even butterflies in Nepal have moved up from 1,800 to 2,200 metres due to rising temperature. Climate change has made the purple finch extend its migration by 650 km in North America. As temperatures rise, scientists believe birds will face their biggest challenge since the Pleistocene era.

There’s also a larger quantum of fear. “Habitat change dwarfs everything,” says Quader. Experts estimate that with 10 per cent of forest loss we lose 10 per cent of forest species. It’ll take citizen-scientists like Snigdha to record and reverse this. Guided by her eco-conscience Snigdha recycles, reuses and uses public transport to stall global warming, so she can keep spotting long-distance migrants. Without more of us making this civil defence, we’ll long be waiting for godwits.