Two favourite haunts of the Mumbai elite have been restored to more than merely their former glory. 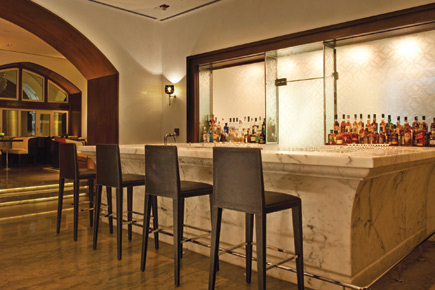 The Mumbai elite’s favourite haunts have been restored to more than merely their former glory.


Who’d believe this was Ground Zero 13 months ago? For the well-heeled of Mumbai, the 26/11 terrorist attack on the Taj Mahal Hotel was not just an assault on the heart of the city, but a strike on their favourite dining room, the Zodiac Grill, where birthdays were celebrated with fluffy Camembert darioles and Kahlua mousse; on the Sea Lounge, where romances were born between sips of coconut nectar and sanitised bhelpuri; and on Wasabi by Morimoto, where bankers on expense accounts did business between mouthfuls of black cod in miso. All this between glimpses of the Gateway of India and white sailboats bobbing up and down in the harbour.

This December, after the resurrection of the Sea Lounge and Golden Dragon, India’s first Sichuan eatery, another Taj legend sprung back to life with licence number 0001 emblazoned by its large portico—the Harbour Bar. It announced the revival of its art deco legacy with a new architectural centerpiece, a carved marble bar rising like a chiselled white massif within.

Wasabi, the hotel’s signature restaurant, once reached via a spiral staircase through the Harbour Bar, made a re-appearance as a magic box, with a bold wraparound red lacquer staircase. Like origami art, the staircase folds out along a lift which whooshes guests to a freestanding sushi bar, teppanyaki kitchen and dining area.

“The Taj’s obvious anxiety was about the private dining room in Wasabi, the jewel space of the restaurant,” says Diego Gronda, managing and creative director of the Rockwell Group, Europe. The design firm had been appointed to redo the Taj Mahal’s Tower wing. But then 26/11 happened, and they found themselves with an add-on contract for restoring the gutted Harbour Bar and Wasabi as well, thanks to their fine record of culturally attuned projects at the W Paris – Opéra in France, The Four Seasons in Azerbaijan and Le Méridien in Algeria, among others.

At Wasabi, as if to echo the lustrous lacquer staircase, shimmering bronze-clad arches now frame the private dining table, which has been recast as a warm glowing metal cocoon that’s visible all the way from the Apollo Bunder promenade. Speaking about the private dining room, Gronda says, “Guests inhabit the sculptural piece. Seeing and being seen, an important factor of the former Wasabi restaurant, was brought to a new dimension.”

Though sister spaces, the Harbour Bar and Wasabi symbolise different eras, one the refined sophistication of the regal 1930s, the other a futuristic Zen space. “The process of redesigning Harbour Bar implied working as an anthropologist,” says Gronda, “the memories of all the past guests and staff, each of whom has an experience to narrate, were a very heavy load to decipher.”

Today, rather than slavish fidelity to the past, there’s a new design narrative at play. Since the opening of the bar in 1933, Mumbai has changed radically. Adaptations could now be made, and they have. The view of the harbour had been rendered barely noticeable from the lounge seating. To regain this scenic vista, two blocked windows were reopened. The entire lounge area has been raised, a subtle modification that’s created a new amphitheatre effect around the promenade in front of this heritage hotel that has always been ahead of itself in blending Moorish, Oriental and Florentine elements of design to perfection.

“Architecture is what is attacked first,” says Gronda, referring to the horrors of 26/11, “Destroying a signature building, the pride of a city or country, is the fastest and most direct way to attack people’s pride.” Having witnessed 9/11 while living in New York, he believes, “Architecture is, at the same time, the best healer.” In Mumbai, he sees this in the pride displayed by the Taj staff, some of whom lost family members during the attacks, in the building’s resurrection.

The Taj’s occupancy rates these days are hovering above 90 per cent, up sharply. At Wasabi, between nibbles of Kumamoto oysters and sashimi, there’s the comforting thread of laughter through conversations as people pass around platters of the new samplings, enoki tempura and shimaji mushrooms. At the Harbour Bar, you can hear chatter, the tinkle of champagne flutes and the crunch of crab-stuffed samosas. Mumbai’s elite are back to what they love most: dining out at the Taj. There’s no space, no era, quite like it.