Like the next hedonist, I too dream of Brazil 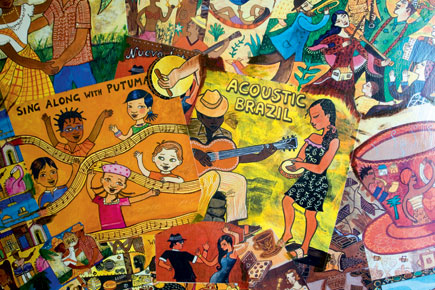 Like the next hedonist, I too dream of Brazil


In Brazil, by which I mean Terry Gilliam’s haunting 1985 film, a nice man with a bossy mother and a bad job ends up as a bungling counter-revolutionary whose last act of counter-revolution—or bungling—is singing Aquarela do Brasil in delirium while awaiting death. Poor Sam Lowry. All he wanted to do was escape: from his family, his career, his society, his solitude, his head and, well, his whole life. The word that pops up most frequently in reviews of Brazil is ‘dystopia’, which is a funny way to describe the desire for utopia, being that utopia is widely accepted shorthand for the eponymous country. I know the feeling well. I often go to sleep with Sam’s favourite tune—the version at my bedside is bossa nova from Antônio Carlos Jobim, though you can play it any way you like right down to Vengaboys—and I too dream of Brazil.

Everybody dreams of Brazil. This is no ordinary tourist destination; it’s a collective fantasy, a postcard from a better place, and a better time—an endless summer of bronze bodies in slippers and sunglasses and smiles. As for me, Brazil is music: the hypnotic sounds of Tropicália from the film Black Orpheus, everything from Caetano Veloso, Gilberto Gil and Tom Zé, and anything by Chico Science and Nação Zumbi. For a large section of humanity, or at least everyone I know, not wanting to settle down in Salvador or Rio is tantamount to treachery. Non-hedonists might point out that Brazil’s Gini coefficient is the highest in the world, meaning that Brazil is the world’s most unequal society, but they find their righteous pinnacles are right there as well—in Brasilia (for the nice new national government) or Porto Alegre (for the good old local government). A wholly different kind of tourist heads for the Amazon—and this is where I went on my first trip to Brazil.

I did not wish to go to the Amazon, and I could not afford to be any kind of tourist. I merely wanted to get away.

Rio would have been a nice change from Bangalore, but I ended up next door, working for a newspaper in Georgetown, Guyana. I still longed for samba, socialism and string bikinis—who wouldn’t? —while getting used to a city circled by the muddy Demerara river, to which no sensible tourist should ever come. I began to enjoy the place. Some time before I arrived in Guyana, I had become obsessed with Walter Rodney—a sort of James Bond of Third World revolutionary movements—and I had plenty to keep me occupied in his homeland. Then one day, the editor of the newspaper asked if I was interested in investigating illegal mining in the Amazon—and I was gone for a month.

I travelled to the Amazon in third class. I had befriended a motley bunch of Brazilian miners in Georgetown, with whom I mainly conversed by mime. Through them, I joined a ‘cruiser’—the imaginative name given to a tiny 4 by 4 truck—with eight people packed together in the back benches and one up front with the driver. Bags went on the tarpaulin roof. The journey to Bonfim was meant to take seventeen hours. That was in normal weather. But I travelled in the monsoon—with rain falling eighteen hours a day—and my journey took four days and three nights.

My companions were a mix of returning Brazilians, Guyanese smugglers, assorted mining-industry hopefuls, and a native Indian schoolteacher on his way back home to the interior. Our cruiser employed two hapless handlers who trembled before the driver, a short, determined little man with an unstable temper, whose idea of a break was halting at any point along the way where paid female companionship was visibly on offer.

In the Amazon, our journey became increasingly surreal. Roughly speaking, we could travel about thirty minutes or so—at frustratingly low speeds, the cruiser tilting precariously to one side as it spun furiously to stay out of the sinking mud—before we got well and truly stuck. When we got stuck, it was in knee-deep water, and sometimes, in what were practically rivers. The only way to keep anything dry was to tie it to the inner roof of the cruiser, and that’s where one precious Indian passport lay, bundled in my swimming trunks.

The road through the rainforest was no such thing—

it was a muddy ravine of differently sized pools of water. Often, having hauled our cruiser out of a sticky situation—

by hacking off the branches of a tree, and diving under to jam the logs under the back tyres—we would trot alongside the vehicle as it stumbled through the forest. Getting on and off was an inevitability that we avoided by simply staying off.

And surrounding us on all sides was the mighty Amazon. Our driver said he saw a jaguar. I saw madly coloured birds and mysterious reptiles. We spent the first night on wood-dust in Mabura Hill, a small logging station at the border of the forest, in the shadow of a giant Caterpillar crane and ceaselessly rotating floodlights. We spent the next night in a village called Kurupakari at the edge of the Essequibo river in a strange and beautiful setting that felt so faraway, it was like looking over the edge of the world. That evening, I swam and bathed in inky water that flowed into a waterfall. As I washed myself down, the man in charge of the pontoon—which we would use the next day to cross over—assured me that I could stay in the water as long as we liked, since the caymans only came out during the day, and as for the piranhas, well, they didn’t seem to like that part of the river I was in, though they were everywhere else. Of course. Someone went out in a boat and came back with dinner. We slept in hammocks strung up between pillars that supported a small, open room. My third night, I surrendered to comfort at the Takatu Hotel in Lethem, where two stern old ladies fussed over me with roast chicken, tomato sandwiches and hot baths.

We were now a ten-metre river-crossing away from Brazil. The Bonfim border was evidence that civilisation exists. If you had papers, you could walk into a booth and have your passport stamped. If you didn’t, you could wave at the friendly Brazilian guards and walk through. I could hardly contain myself. And neither could my fellow travellers—most of whom had been transporting contraband in unmentionable orifices that had thankfully gone unchecked along the way.

Brazil! Fine, Bonfim was a nowhere town, but I was in. I took a bus to Boa Vista, a slightly less nowhere town. I had just read Naipaul’s incredible West Indian travelogue, The Middle Passage, and I’m not sure if I was more irritated by the fact that he wrote it at the age of twenty-eight, or that his description of the journey to Brazil—to a dusty town, exactly the same as the one I was taking now—still held good, forty years on. There was nothing to do in Boa Vista except wait for a bus to Manaus.

The road to Manaus cuts right through the heart of the Amazon, and is plastered with warnings of danger. Our bus, I was told, was legally prohibited from stopping anywhere along the route except at one designated rest area. The reason it is dangerous to drive through the Amazon in a thundering two-storey vehicle with a police escort is that almost all roads in the Amazon are contested, with the losing side—native Indians—regularly effecting their disgruntlement on the victors. In Manaus, there was no obvious evidence of this hostility, but it was advance notice of the fact that even Brazil can’t live up to its clichés; a subsequent reminder of which I received on Avenida Paulista in São Paulo some years later, where jet-

black beggars and bottle-blonde bankers went about their business in stark contrast to the sexy, happy mestiços of national legend.

Manaus, likewise, has been trying to live up to its own cliché, and the last hundred years haven’t been kind. At the turn of the twentieth century, it was boomtown. Natural rubber was king, and Manaus was the world headquarters of its production and trade. By the mid-twentieth century, however, rubber production had shifted east and could be chemically synthesised, and the city more or less collapsed—but not before telegraphing some flamboyant messages to mark a time when the rich regularly sent their laundry to Paris. Of these, nothing says because-I-can more than the Teatro Amazonas, a fat, bejewelled, gold-crowned monster of an opera house that squats in the middle of this jungle gateway. One hundred years later, the glitter has faded enough to turn the place beautiful, but it is still fabulously pointless—except as the indelible inspiration behind the protagonist of Werner Herzog’s 1982 film Fitzcarraldo, a remarkable drama of frontier fever and opera obsession.

I swam out into the silky black expanse of the Rio Negro, and sunned myself on Praia Ponta Negra. I watched the opaque, leaf-stained water of the Rio Negro meet the clear white of the Solimões river and marvelled as each strain stayed true to its colour. I took a boat trip out into the Amazon and spent a week in the densest, lushest wilderness I have ever known. I went fishing for piranhas—and I didn’t feel one bit bad catching this maniacal escaped convict of a fish.

I haven’t made it out to Salvador or Rio yet, and I’d like to. I hope Salvador will be a lot more exciting than the novels of Jorge Amado. In fact, I hope it turns out to be the culmination of every paradisical fantasy ever known to every woman and man since time immemorial. There are far too few places in the world that have the balls to be an idea, let alone an idea that rests on the joyful union of fugitive Nazis, African slaves, Japanese immigrants and Indian indigènes, and for this fantastic and impossible ambition alone, I will always hold out for Brazil.