The Passage from India

Global fashion was chasing an Indian dream. The dream is now over. 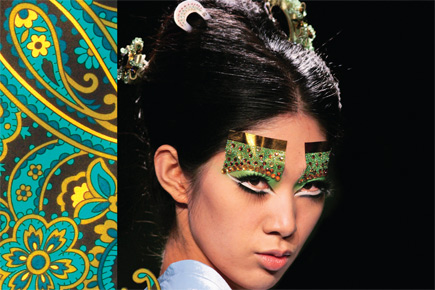 Global fashion was chasing an Indian dream. The dream is now over.


In 2008-09, all runways invariably led from India. John Galliano was taking a bow to AR Rahman’s Jai Ho, after a line doused with Ikat and the mother of all Indian prints, paisley. Paul Smith’s line was inspired by a friend’s visit to Darjeeling, and Ferragamo was prescribing rudraksh beads and tie-and-dye suits for the new Indian Maharaja. Zegna had taken a lesson out of Canali’s book to advocate the bundgala, while Hermes models walked a saffron runway. Armani had Goa on his mind. And the late Alexander McQueen had jootis and Indian silver jewellery on his own pair.

In fact, the attempt to evoke the thoughts, sights and smells of the Indian marketplace was so serious that even the unsuspecting Indian sari was being reinterpreted. Etro was heavily recommending sari overalls, while the Hermes woman had one draped over a shoulder. Oscar De La Renta was making bags named after the city of the Taj, and Judith Leiber was making clutch bags shaped like camels.

Couture is snooty, you might argue. But even pop fashion had joined the Indian exploration and discovered desi kitsch. Shakira dressed like an apsara for the 2006 VMA awards, and Beyonce performed in India wearing a ghagra choli. Ashley Judd took to the red carpet in a sari, and Slumdog gave the trend one swift kick in the pants.

Those, alas, were the days—all before fickle fashion moved on. Galliano, on a trot, went researching at the Costume Institute of the National Museum, looked at a picture of Charles James doing a fitting and a woman riding side saddle behind him, and wham, India had been passed over—the season would be an equestrian line with 18th century undercurrents, he thought to himself.

Take a look at global fashion of relative recency. McQueen’s last unfinished line represented none of the influences he’d picked up on his “transformative pilgrimage trip to India”, his longest time away from home. The designer wasn’t thinking about Buddhist culture that he’d immersed himself in, but more about high Church angels and Bosch demons in hand-loomed jacquards and the Dark Ages. Meanwhile, the Hermes Fall 2010 line was busy referencing tennis, while the Paul Smith woman showed off her hole-laden fishnets and tailored hunting jackets. Overnight, India was conspicuous by its absence.

‘What goes in has to go out’ is one of the first clichés shoved down the gullets of flunky fashion hacks, a cliché that must liberally be dragooned through everything reported for the first month-and-a-half. Does it trumpet a bad time for Indian fashion now that the cliché has been yanked out of retirement?

It does. But, the contentious bit isn’t the quality of Indian fashion hacks, but what really happened.

No doubt, India had arrived on the fashion ramps of the world—and it had done so with the flair of a young cuckoo, pecking other influences off the nest. But even as tailcoats with antique silver zardozi work were being uncovered and the paisley print was threatening to rival the herringbone check, the next half  decade was a blur of tikas, saris, mehendi, beads and Indian embroidery. The colour of the universe was loud, best sourced at an Indian wedding. If Hendricks had the universe purple, well, purple it was. If it made sense in Delhi, it made sense in New York, where a walk down Fifth Avenue gave you the distinctive tinkle of an Indian silver anklet, High Street stylists made the kurti their own, and bloggers happily welcomed the high-speed elevator jooti.

But now, sanity has returned. “The novelty about India has worn off,” designer Varun Bahl admits, “We went through a phase when India being the ‘It’ country was made a huge deal of, and the tribute to Indian ethnicity suddenly became the ‘go to’ reference in the collections of international designers… That time I think has slowly passed.”

Fellow designer Vineet Bahl agrees. Just returned from a holiday, he confesses that India has vanished from fashion’s holy land Paris, and holds Europe’s age of minimalism responsible for the exit. “Everyone in fashion is going minimalistic, it’s great for designers like Rajesh Pratap Singh,” he laughs. “But India is completely and totally out.”

According to Varun Bahl, it was designers like Sabyasachi Mukherjee—selling at Browns, no less—who best understood the ‘Indian ethnicity’ trend. Indeed, Mukherjee’s tent silhouette was such a mega success that it was even touted as one of ‘seven for the season’ in NYT. And even though Manish Arora continues to script his success story, face it, his brand is more ‘eccentricity’ than ‘India’.

However, not everyone agrees. India hasn’t gone away, it just doesn’t scream ‘Indiaaaah’ from rooftops anymore, nor is fashion country-centric anymore, according to Sujata Assomull, editor of Harper’s Bazaar India.

“India is no longer used to titillate… it’s no longer just about embellishments, it’s growing into something more. International designers are now beginning to understand India. Galliano, Yves Carcelle are all coming down to reference India. But this time, the Indian influences are becoming main-stream, they no longer stick out,” Assomull says. She thinks it’s imperative for Indian influences to evolve and become mainstream if they have to survive globally.

Tragically, Indian influence has yet to transcend barriers of Indian kitsch and ethnicity to become part of the global style language. For success, there are pointers in the adaptability and evolve-ability that the bundgala, kurti, Jodhpurs and sari exhibit.

The way ahead could lie in weaving India’s way into the wider international tapestry, to be referenced and re-referenced at the whim of global couturiers. What might work, for example, is the use of beading and embroidery on Italian fabrics and American/European styling. Reinforcing the desi identity by screaming from the head of the runway could only go so far, and it has been dumped in the attic along with things like leg warmers and the zoot suit—the irretrievables.

The problem, as Varun Bahl concedes, is that “Indian designers are doing what the West does”. In their quest to play ball in the West, showcasing a contemporary India is low on their priority list.

Fashion trend analyst and blogger Harilein Sabarwal agrees: “You don’t see India in the collections because India is no longer a trend forecast, it’s become a classic. Designers will not make collections influenced by India simply because every season has 3-5 trends that are to be followed, and India isn’t one of them.” Sabharwal, though, compares India to Jackie O—a classic that remains a perennial fashion constant.

Sabharwal reckons that India’s flirtation with fashion started somewhere near 2003 and got a shot in the arm with the rise of spirituality. “As the spiritual trend continued, everything about India became a trend, from food to Bollywood to tourism to clothes to music to spices to fashion… India has a following today in all areas from food to music to yoga to Ayurveda, even interiors,” she says. Just that it’s not in the spotlight anymore.

However, we agree and disagree. India as a global trend had as much to do with spirituality as with India’s growing economic might and the Tata Nano. India was being talked about, whether it was a wedding destination (think Hurley-Nayyar or the Chatwals’), Anand Jon’s jail term, Sonny Caberwal, the world’s first Sikh model shot for GQ, or as a design hub for the rest of the world.

But it’s the ads that delivered by far the most crippling blow. Not so long ago (for the 2008 campaign), Lakshmi Menon cavorted with a painted elephant for Hermes in a collection more ‘Incredible India’ than the ad campaign of the Tourism Ministry. Yoga Guru Deepak and son Gotham Kapoor shot an ad for Gap. Zegna was shooting a campaign with the done-to-death-but-still-exotic Rajasthan forts and street markets in the background. Canali’s line was a tribute to a ‘Journey on the Orient’. The earthy smells of India, complete with turmeric and saffron, had fashion labels all agog.

This year, the ads are gloriously different. The ‘cave paintings of the modern era’ have dropped India. A stark staircase has displaced Rajasthan’s bazaars in Zegna’s 2010 ad, the Paul Smith couple now walks about in a country house, and Canali has roped in NY Yankee’s Mariano Rivera for their first ever celeb campaign. And the unkindest cut of all, perhaps, is Hermes’ 2010 campaign with Karlie Kloss sleeping on a pile of pillows covered by Hermes scarves against a clear blue sky. No whiff of India.

It’s get-real time, then. Presumably, some of the numbers in market surveys they read turned out to be gross exaggerations, and the Indian luxury market underwent what’s called a ‘correction’. Brand partners were changed, strategies were refashioned, and there simply wasn’t much space to pursue India the way they had planned once upon a time.

For now at least, it is clear that the pachyderm has been ordered off the runway and out of the international camera lens’ focus. Tragically for the West, though, the experience may well have left a trail of elephant droppings in its wake, and unlike New Yorkers, Indians are hardly in a hurry to scoop ’em up and bag ’em.