The Leopard in My Backyard

Where close encounters with creatures of the wild are disturbingly common 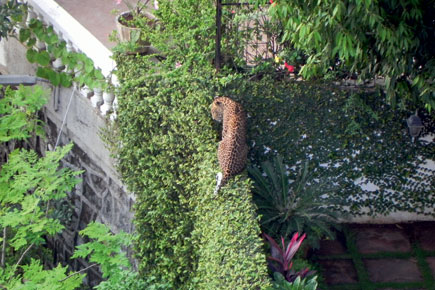 Where close encounters with creatures of the wild are disturbingly common


The website of Royal Palms Estate says that the township is your ‘world in a village’. Located in Mumbai’s Goregaon suburb, this ‘village’ is a 240-acre settlement that has five-star hotels, recreation clubs, lakes, swimming pools, a golf course, bungalows, villas, row houses and marble statues, apart from a little hill as part of its natural landscape. It even has the Sanjay Gandhi National Park as its neighbour.

It is a world apart, in many ways. Literally so, at some points. The past ten days have seen large grilled fences, at least 15 feet high, come up around the backyard of row house No 3. A large tree nearby has its trunk entwined in a creeper of barbed wire. And it’s not just this compound. Row houses No 4 and 5 are fortified too.

What warrants such self-encagement? An unwelcome guest, it turns out. Ashima and Arnab Chaudhuri, the couple who live in row house No 3 along with their two-year-old son and six-month-old daughter, were settling down last month to watch a Wimbledon match on TV when they got calls on their respective phones. At the other end of both were their neighbours, and they had much the same to convey: “Don’t panic, but there is a leopard in your compound.”

They rushed to shut their doors, but realised that their maid had taken their baby daughter for a stroll on the road nearby. The scare was as real as could be. The leopard, after knocking over a few flower pots in the compound, jumped across the wall of the backyard, and came face to face with the maid. She froze. The big cat was six feet away. It so happened that the leopard chose to pass them by, making its leisurely way to the golf course and then possibly back into the National Park. “The leopard was right there, so close,” says Shantala Babu, the maid, gesticulating to point just how close. “When I saw it, I was so afraid that I just couldn’t think of what to do. I just stood there, clutching the baby.”

It was an encounter no one wants repeated. Leopards are known to frequent this part of Mumbai, but they usually stay away from humans. They are mostly sighted in abandoned parts of the area—Arnab once saw a leopard sleeping on the roof of an abandoned hotel—and almost always at night. However, on this occasion, it was only 6.30 pm, and the evening was still bright.

The Chaudhuris’ backyard is now barricaded. The children are not let out into the street or even the compound. The pram has been done away with; a leopard might see a child in a pram as easy prey.

And when Arnab, an animation filmmaker, returns home from work (in Lower Parel), Ashima has him park his car as close to the entrance as possible. These are necessary precautions, she feels.  Carelessness could be fatal.

It’s not just the Chaudhuris and their fellow residents of Royal Palms Estate who are worried. Over the years, as several settlements have come up around the National Park, leopard encounters and sightings have become so common that local newspapers don’t always bother reporting them. The park itself is unique. It is one of the few national parks in the world located in the midst of a bustling city. Some of the area’s housing colonies are simply too close to the park, while a few are outright encroachments of the protected wildlife zone.

Living in such close proximity, humans and wild animals are bound to run into each other. Most of the time, it means nothing more than a story to tell friends and colleagues. But sometimes, it can result in life lost.

A little over a fortnight ago, something terrible happened in Shankar Tekdi, an illegal encroachment in the park’s core area. Shankar Tekdi is located in Mulund and mostly houses men who work as labourers and women who work as maids in posh housing enclaves close by. The house of Dnyaneshwar and Sangeeta Thorat, a one-room shack built of rusted corrugated sheets at the edge of the settlement, bears a pall of gloom. On 15 July, the youngest member of their family was killed by a leopard. Six-year-old Sanjana’s head was found the next day.

Sanjana’s mother Sangeeta now spends her day sitting listlessly outside her house. Her other two children, an eight-year-old son and a 12-year-old daughter, haven’t gone to school since the death of their sister. Her husband Dnyaneshwar aimlessly loiters around the village, his eyes heavy from lack of sleep. He doesn’t go to work, and doesn’t know how and when he can resume. “How can I go to sleep knowing that my daughter’s killer lurks around?”

Around 10.30 pm on 15 July, Sanjana had asked her mother to accompany her to a nearby dumpyard so she could relieve herself. Sangeeta warned her against it, knowing that the area wasn’t safe, but then relented. While at the dumpyard, she found herself momentarily distracted by a fight in a house nearby. It was her daughter’s scream that drew her attention back. “I saw my daughter in the leopard’s jaw as he ran away,” says the mother, “I screamed.” The entire village went searching for her, she says, but returned without the child.

At least one individual in almost every household of Shankar Tekdi has a picture on his phone of a leopard encountered nearby. Humans were always thought to be safe, since there are plenty of dogs and goats around that make easy pickings for leopards. Pets, too, have vanished on a few occasions. But now it is hard to miss the sense of fear, even panic.

Without the means to build a wall—something that won’t be legally permissible, this being encroached land—local residents have collected money to buy wires and light bulbs. The hope is that bright lighting will keep leopards away. Some houses also have a stock of firecrackers. But there is no saying what works. When a leopard returned a few nights ago to the spot where Sanjana was killed, the firecrackers that people lit had no effect. It was the din of utensils clanged later that drove the creature back into the darkness.

There are 20-25 leopards on the reserve and in the forests around it, according to Sunil Limaye, director of the Sanjay Gandhi National Park. While deer remain the leopards’ most common prey, he says, leopards are also venturing out into human habitations because of the ease with which they can pick up strays.

People will just have to be careful and learn to live with leopards around here, says Vidya Athreya, a wildlife biologist associated with Mumbaikars For SGNP, a leopard conservation project that aims to minimise man-animal conflict in the area. Trapping and releasing leopards elsewhere isn’t a solution. “Earlier, because of public pressure and lack of information, it was common for leopards caught in areas close to Mumbai to be brought to this park and released here—with no consideration of their social systems, their strong territorial behaviour, etcetera,” he says, “What we were doing was wrong.” The early to mid 2000s saw several leopards from other areas released in the park, and as many as 30 leopard attacks were reported in 2004 alone, of which 19 proved fatal. This was arguably because the new inductees were pushed to the peripheries by the earlier lot.

In learning to live with leopards, the case of Borivali’s Giri Shikhar buildings A and B is instructive. Residents of building B, which borders the park, have often spotted leopards loitering in the area at night, even in the evenings. Half-eaten deer carcasses are not an uncommon sight. Not only has the housing compound been barricaded with a 20 foot high fence, to ward off leopards, it has taken to switching on low-level halogen lamps as soon as the sun starts going down.

The two buildings had only two watchmen earlier; now they have ten. Vishnu Ardekar, who is 65 but hangs on to his job by claiming to be 45, is the most fearless of the lot. He possesses a number of canes, one of which is meant just for leopards. It is heavier than the rest, and when hit against an object, makes a loud echoing sound. “Leopards are so stealthy, sometimes you don’t even notice their presence,” he says, “If you see one, you shouldn’t panic or run. I just bang my stick around to make some noise, and it goes away.”