A rare genetic disorder can be the most crushing and lonely ordeal to suffer. 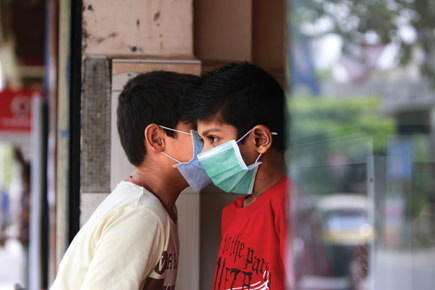 A rare genetic disorder can be the most crushing and lonely medical ordeal to suffer.


If you make Ashley Vanristell stand shoulder to shoulder with Vipul Haware and guess who’s the elder of the two, it’s a no-brainer. Ashley’s about half-a-foot taller and chubbier with a ruddy complexion. Vipul is thin, wan, shrunken and sickly. He looks younger by far but in fact, at 12, is two years older. Since September last year, Vipul has been bedridden with a bout of bronchitis. Severe infections are nothing new to him. He has very little immunoglobulins or antibodies in his blood to fight invading viruses and bacteria. Vipul and Ashley are linked by immunoglobulins, or the lack of them. Ashley’s body, too, can’t produce enough and he looked just as sickly for the first six years of his life. And then, a paediatrician came out with a name for his disease. Hypogammaglobulinemia was a mouthful but it explained a lot.

“It was a genetic disorder. The doctor told me it was incurable but could be managed,” says Ashley’s mother, Andrea. Once a month, Ashley would need infusion of immunoglobulins into his blood. There was however a catch—the medicine would cost Rs 16,800 per month and Andrea just couldn’t afford it. That was when Ashley turned magician. “My mother had bought me a magic kit for Christmas. I couldn’t keep away from it. I kept practising,” he says. Soon, he gave his first show. He also started modelling and acting. “He began to contribute to his treatment,” says Andrea.

Because of the peculiar situation—a boy magician-model earning his own treatment costs—help started coming in. A charity organisation of the Ambanis offered to take care of his medicine costs. “It was like God had arrived,” says Andrea. But Ashley now wanted to help other kids with his ailment. “He had no idea what a foundation was but he wanted to start one,” says Andrea. During a live programme on television, he said it.

Vipul was at home watching the program. He had recently been diagnosed with hypogammaglobulinemia. He noted the telephone number flashing on the screen and gave it to his father. “I had had to sell off my flat to meet Vipul’s treatment costs. I was wondering how I would be able to continue,” says Santosh, his father. But the foundation had not started yet. Andrea told Santosh that they would have to wait. Last September when Vipul’s health had deteriorated drastically, Andrea called him. The paperwork for the Ashley Hypogamaglobium Anaemia Foundation Trust had been completed. They would pay for Vipul’s treatment. “I knew what they were going through. If you have a genetic disorder, there are very few people out there to help you,” says Andrea.

A genetic disorder can be a crushing ordeal for any family and India has a large number of such families. One scientific paper estimated that 9.3 lakh children are born with genetic disorders every year but “still receive relatively little overall attention due to the mistaken perceptions… that inherited diseases are very rare, affect only a small proportion of people, and even if diagnosed, are largely untreatable”.

For those who are in that further subset of a rare genetic disorder, any sort of support is minimal. That is when you have incongruities like a 10-year-old contributing to the treatment of a 12-year-old. Or you have someone like 28-year-old Payel Bhattacharya of Kolkata, who has had five major surgeries and a liver transplant. Payel has an extremely rare genetic disorder called Von Hippel-Lindau (VHL) disease, which leads to tumours in blood vessels. At the age of 12, she had had her first surgery to remove a tumour in the left forefoot. But doctors did not diagnose her with the genetic disorder. It was only after a brain tumour surgery in December 2006, that they zeroed in on VHL. Within four months of the brain surgery, they found tumours in her liver. She needed Rs 22 lakh for a transplant. Payel’s financial situation was desperate. All her father’s savings and retirement benefits had gone in treating her. “I was not ready to give up. I wanted to survive,” she says. Payel solicited help from companies, NGOs and charitable organisations. The JRD Tata Trust immediately granted her Rs 3 lakh. She also opened a website soliciting donations.

Her liver transplant was a landmark, the first for a VHL patient in India. Though it saved her life, Payel’s problems were not over. After the transplant, she now needs immunosuppressant drugs. Also, there are other medicines needed to keep her healthy and the expenses of frequent medical check-ups. If Payel cannot manage to collect at least Rs 35,000 every month, then her life is in danger. “We have no savings left. My resources are getting exhausted fast and when I buy a bottle of immunosuppressant drug, I don’t know if I can afford the next one. Some charitable organisations tell me to wait for some time when I approach them for funds. What they don’t realise is that I just don’t have the time to wait,” she says.

Both Payel and her father are not willing to give up. Her father, who has an 80 per cent blockage in his heart, has postponed a bypass because the family can’t afford it. He tirelessly does the rounds of foundations and trusts, trying to solicit assistance. Payel is confident that if she is able to get financial assistance with her medical problems for some years, she can complete her studies and then support both herself and her family. “You can move mountains with your willpower,” she says. “But I just wish that there was no distinction made on the basis of diseases. We celebrate days to create awareness of diseases like cancer and Aids. But does anybody ever think of people with rare diseases? They never get help.”

When Rajesh Rodrigues, a chef turned journalist, got admitted in KEM Hospital in Mumbai with a collapsed lung, the doctor checked his fingers and nails and then began to ask strange questions like, “Is everyone in your family so tall?” He told his assistant to write ‘Marfonite symptoms’ and walked off. Rajesh’s body measurements were taken the next day. When he was finally told that he had Marfan’s syndrome, it joined many dots in his life. For example, the reason for a brain haemorrhage he had had while working in Dubai. Or why he could pull his fingers back and bend them to touch his wrist, something which his friends couldn’t.

“Marfan’s loosens connective tissues. If I hold my hands straight sideways, the span will be greater than the height of my body. My fingers are long and bony. I have a high palate in my mouth. All for the same reason, the connective tissues are loose,” says Rajesh. He realised that his father who died of a brain haemorrhage had probably suffered from the same disorder. Marfan’s becomes deadly when connective tissues of vital blood vessels and organs get affected. That’s why Rajesh’s lung had collapsed. And years ago, an artery had burst in his brain for the same reason. If he maintains a healthy lifestyle, he can live a medication-free life. Marfan’s patients often live comfortably into their 60s. But only if they are aware of the condition. According to one estimate, the life expectancy of a patient diagnosed with Marfan’s is 72, while for someone who does not know it, it is 32. In genetic disorders awareness and diagnosis is the difference between life and death. Says Rajesh, “General practitioners just don’t know anything about such diseases. Before my brain haemorrhage, when I had the most painful headache, the doctor I went to gave me medicines for malaria.”

Even at other levels of specialisation, infrastructure is abysmal. A city like Mumbai has just a handful of medical geneticists to diagnose genetic disorders. As it is, a rare disorder is difficult to diagnose unless you are aware of family history and the medical geneticist knows where to look in the DNA. After diagnosis, getting money to continue treatment is the next challenge. For every case of hypogammaglobulinemia, there is a lifetime supply of expensive medicines needed and there are just not enough boy-magicians in the world around to help.

In a paediatric hospital in Thane, Vipul is waiting restlessly for his monthly intravenous dose of gamma globulins. It is a painful experience. They are never able to locate his veins. But soon it is done. Andrea usually comes with the cash for the medicine on transfusion day. Today, she has brought Ashley along. Before leaving, he shows some magic to the doctors. He pulls a rubber band over two fingers and they glide onto his other fingers. In return, a doctor makes a matchstick jump automatically from a bent finger. They spend a long time there.

As she comes out of the room, Andrea is exultant. “They gave us a contribution to the foundation,” she says. It’s not much, just Rs 2,000, but it should help in Vipul’s next dose.