Goa had the right idea about casino tourism until a series of killjoy measures came to spoil the party. 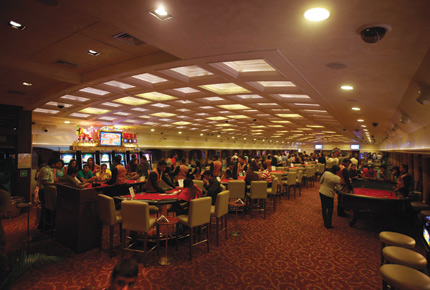 Goa had the right idea about casino tourism until a series of killjoy measures spoilt the party.


I sit at Anjuna Beach, watching a waiter judgingly and grudgingly collect remnants of a mojito glass I have clumsily demolished, when a gentleman next to me decides to pick a conversation. “Oh, vodka with coriander,” he says (it’s mint, but what the hell?). I prepare myself for what promises to be a painful conversation, when his phone rings. “Kya India batting kar rahi hai… kitna lagaya… aur Sachin?” he trails off, walking away. Suddenly, what casino owners in Goa say starts to make sense—Indians like to gamble, and most do it illegally.

The morning has been a rather unusual one. We arrived in Panaji one evening in pursuit of the Goa serial killer when a rather unexpected sight focused my eyes: the Caravela, Goa’s first and most celebrated offshore casino, almost hidden from view, abandoned and empty. A couple of yards downstream, the Leela’s smaller casino boat MV Rio too is a ghost ship. There’s more. A huge off-white boat called Maharajah comes to sight, a far cry from the buzzy Vegas-style casino with showgirls and Rolls Royces that I half expected. While the first two vessels have packed up their roulette wheels and dealt their last hands, the Maharajah has been anchored in the Mandovi River since December, awaiting clearance from the state shipping department.

Welcome to Goa, ladies and gentlemen, India’s Las Vegas by the Sea, the place where gambling is legal but fast becoming impossible. Even before it had had an opportunity to celebrate its status as a ‘haven for gamblers’, casinos in Goa have run into trouble. An entrance fee higher than any casino anywhere in the world, the absence of a gaming commission, a government relying on Google for information, and objections pandering to popular notions about casinos are all making the Goan casino industry stare down the barrel.

Business has dropped anywhere between 80 and 90 per cent, and footfalls this September were half of that month in 2008. Casino operators say they are not sure how long they will be able to keep going. In a bid to check under-age gambling, the state government has restricted the age of Goans entering casinos to at least 25—this, in a state where you can drink at 18.

But then, Goan casinos have been accused of everything from corrupting the local culture and running prostitution rackets to wrecking the environment and spreading swine flu (through their waste). Somewhere in between, the Chief Minister stayed the same but the ruling party changed, and the current government started accusing the previous government of having favoured offshore casinos, so the very approval of licences has come under the scanner.

Though the casino industry in Goa started in 1994, the first offshore casino, the Caravela, was launched only in 2001, by Advani Hotels in collaboration with Casino Austria. It was a monopoly until 2008, but shut operations this July ‘because of tax and licence issues’; now, 2001 was also a boom year for onshore casinos, with almost every hotel rushing to set up a baccarat table and slot machines. However, the party really got going only in October 2008, once six more ships were given permits for offshore gambling.

Somewhere in 2002, realising the revenue potential of casinos, the state government started levying an entrance fee of Rs 200 per head that went straight to its coffers. With effect from 1 September this year, this was raised tenfold to Rs 2,000 per person, which, according to John Snowball, general manager of Maharajah Casino, is almost thrice the next highest casino entry fee in the world—“at the Monte Carlo in France which charges €10 (about Rs 670)”.

The state government says it was just trying to keep Goan youth from social damnation by deterring their entry to such dens of vice. According to Chief Minister Digambar Kamat, “There were a lot of complaints that middle-class people’s children were going to the casinos. Probably, they used to rob money from somewhere; they used to get money from their fathers’ pockets. I wanted to discourage that. I don’t have a problem if tourists or foreigners go there.”

The casino industry finds that logic faulty. “This (fee) makes a huge difference because 90 per cent of the people who visit casinos come not with the express purpose of gambling, but for light entertainment,” says Narinder Punj, managing director of Highstreet Cruises, which runs Casino Royale and Kings offshore casinos. According to Punj, the fee increase has almost killed conference tourism, thus turning the business unviable. “It’s irrationality,” he says, “Conferences often want to tie up with casinos… but now they end up spending Rs 1 lakh on just the entry of 50 people.” Business for him has fallen 60 per cent.

According to Xavier Vaz of Casino Prive, the fee hike has hit even onland casinos such as his own. He believes such casinos have seen footfalls slide as much as 80 per cent. Onshore casinos anyway face more restrictions than those afloat off the coast (on each licence, they are allowed to set up 20 machines), and are not allowed any card games which are not run electronically—stuff real gamblers would scoff at.

When Open did its round of Goa’s casinos, the floors were not exactly oozing with modern-day avatars of the Fourth Earl of Sandwich, the accomplished gambler who created the sandwich because he didn’t want to get his cards greasy. There was a solo gentleman who looked reasonably gambling savvy (from the Sippy family, we were told), but most guests at Casino Royale seemed more interested in the buffet spread (courtesy China Garden) than the roulette round.

We in India still like to do things in droves, especially holidays, and it’s here that the entrance tax stings the most. For a group of ten, of whom only a couple would be betting, you’d fork out over Rs 20,000 just to step inside a casino. Then there are other charges. The value-for-money seeker—also called the Indian consumer—wants an experience, and that’s unlikely to be a pleasant one if one feels pickpocketed even before the games begin. For offshore casinos, at least the novelty of being led up a barge to hop aboard a fully lit-up ship is a deal in itself. Still, the entry tax is an incentive for casino owners to slip customers in on the sly, as many openly admit they do.

While the entrance fee hits onshore casinos harder than offshore ones, the offshore licence, their owners say, is proving to be an even bigger headache. Srinivas Naik, representative of Casino Pride, says the licence fee has increased from Rs 3.5 lakh in 1999 to Rs 5 crore today. He estimates that owners pay around Rs 1.5 lakh a day in license fee alone, irrespective of whether the casino is operational or not. Snowball estimates that Maharajah is running up a loss of Rs 50 lakh every month that it spends idle on the Mandovi.

In fact, it’s this licence fee which was partly responsible for the Caravela shutting down. Running it “just did not make business sense anymore”, admits Luke Pereira, deputy director, sales, west, Advani Hotels and Resorts, which is now focusing on its onshore casino. The Leela’s Rio, on the other hand, has been sealed since early October on account of a delay in licence fee payment. Both ships are now set to change hands. Another, Mint Cruise, was also sealed for fee non-payment (that its vice-president was subsequently arrested along with a sex worker didn’t do its public image much good, though).

All in all, Punj puts the in-season cost of operating a casino at about Rs 10 lakh a day. To break even, a casino should be doing business of around Rs 60 crore a year. That’s a helluva lot of money.

Things are so bad that the Goa Offshore Casino Association and Association of Onshore Casinos are both going hoarse demanding a regulatory mechanism to govern them—a gaming commission the likes of which exist in both Europe and America. “We’re calling for a casino control board to act as a watchdog on casinos and lay down regulations for them to operate,” Punj says. Snowball also feels that the state needs to think beyond instant revenues. “We’ve been banging this drum for a while now,” he says, “What casinos in Goa need is a watchdog.” With one in place, the murky myths that surround the industry might begin to evaporate. On closer inspection, public authorities would be able to see how harmless the business is, and convince people at large of the same. Gamblers would be reassured as well, such as those who complain of cameras helping the house cheat its patrons (this is absurd, say casino owners, since these cameras are in standard use worldwide).

Semi-autonomous bodies in Nevada or Atlantic City in the US (adapted to local conditions) could serve as a model for a gaming commission. “But the government is still looking up the Internet for information on casino operations,” Srinivas laughs. Goa’s Tourism Director Swapnil Naik admits the need for regulation. “But we don’t have anything to fall back on,” he says, optimistic nonetheless about Goa developing into a world-class gaming destination. “This season the ban on casinos in Russia will boost business here,” he adds, hoping to swing holidayers away from Singapore and Kathmandu. “There is a certain lifestyle segment that casinos can tap, and a proper boutique hotel will help expand the market.”

So, at what stage is the commission proposal now? Sidhivinayak Naik, undersecretary at the state home department, will not say. “Go file an RTI,” he growls, unwilling to breathe a word.

Goa attracts 2.4 million visitors every year. Good casinos could double that figure. Unhindered, reckon analysts, the industry could be worth a healthy Rs 67.5 crore within a few years. As of now, it employs only 2,000 people directly and another 10,000 odd indirectly. A boom could see these numbers multiply. But the Goa government is still unsure, happy to set the industry adrift, its future uncertain and prospects hazy. Either way, I’m off to the slots. Much like everyone else, I secretly hope that the first time I crank the slot arm, the counters will stop at 7-7-7 and so many coins will roll out that I’ll have to hire people to count them. Ahhh… the good life!

But I do nothing of the sort. Like most Indians, I pick the buffet over the roulette, even if you catch me tuck a gaming guide under my arm. Having skimmed through it, I can authoritatively tell you that flash is a lot like teen patti, only the stakes are so much more alluring!