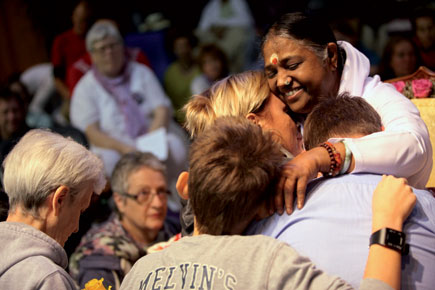 The stars have not been aligning well nowadays for godmen. Or godwomen, for that matter. Think of a spiritual guru and the immediate accompanying image is that of a skeleton in ochre robes hiding in the closet of a swanky double- storeyed ashram. Usually, it had the wisdom to stay there, but nowadays the skeleton is itching to jump out and write a book.

In the case of Mata Amritanandamayi, the saint who made a career out of hugging, that is what Gail Tredwell, her long-standing personal assistant, did. In 1999, after 20 years beside her guru, Tredwell couldn’t take it anymore and fled. She kept a low profile for a while and then, in a Yahoo group of ex-Amritanandamayi followers, posted 40 reasons for her decision to leave. These included: ‘Horrible yelling and shrieking like a demon’, ‘Having to tell untrue miracles in talks, she (Amritanandamayi) herself would make them up for us’, ‘Worn out from heat and crowds and the culture of India, also the jail-like lifestyle in the Indian ashram’, ‘…hit and abused constantly by the swamis,’ ‘Constant accusing me of being a good for nothing and always angry at me which always would make my guts cringe and constantly putting me down’. This might sound familiarly like a person fed up with job conditions and a bad boss, but Tredwell’s book, Holy Hell, which was released recently, has more disturbing accounts of sexual assaults she suffered at the ashram.

Taken in isolation, these charges are grave, but in the history of modern India’s spiritual empires, it is but a recurring regularity. A year ago, Osho’s long time personal secretary, Ma Anand Sheela, came out with a book in which she revealed how he manipulated and exploited those around him. Like telling 21 rich followers they were enlightened, so that they would buy more Rolls Royces for him. From a guru who showed the path to enlightenment, he had become a god who issued the certificate.

Allegations of child molestation followed the late Satya Sai Baba for much of his life; Chandraswami, who swung governments, was accused of fraud; Asaram Bapu is in jail now accused of rape; Jayendra Saraswathi, the Shankaracharya of Kanchi, has just got cleared of a murder charge; Swami Nithyananda was caught on camera cavorting with female disciples—it is an ever expanding list of controversies which now has Mata Amritanandmayi in it. And these are the blue-chip spiritual gurus in India. The second and third-tier would have even more questions around them.

But, even as these controversies come into the public glare, there is an inexplicable concurrent phenomenon happening. In an industry that is based on reputation, a stigma seems to have no effect—the spiritual empires keep expanding. In Satya Sai Baba’s case, for example, he just kept getting more and more popular despite the allegations. Also consider that his reputation in the early days was built on miracles, but, once his brand was established, he said that the preordained period of doing them were over. Even without miracles, people kept flocking to him. You can take a safe bet that once Asaram Bapu gets bail, mam- moth crowds will grace his discourses.

The standing of a controversial godman is a bit like that of political leaders accused of corruption who are almost certain to win in their constituency because the bribes filter down to voters. The godman’s job is, however, easier; he doesn’t have to offer anything material. He holds out something even more necessary: hope to fill the emptiness inside a person. To accept that the guru is flawed or that liberation from all sorrow is impossible is to concede that there might be no meaning to life. Most followers can’t do that, and it is easier to just carry on with the delusion. It took Tredwell 20 years to get over it and the reason she could was that she was seeing the charade from the inside—until towards the end, when, as she writes in her book, ‘…my faith dangled like a loose tooth ready to give way to the slightest provocation.’