Can the unthinkable happen? Will Indians finally abandon the pressure cooker? 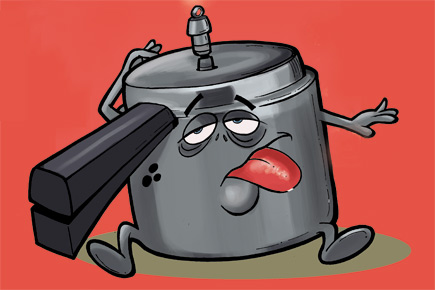 Can the unthinkable happen? Will Indians finally abandon the pressure cooker?

The pressure cooker is so unremarkable and common that people are confused when asked to describe their relationship with it. “You want to know about my pressure cooker?” It is believed that 80 per cent of urban Indian households use one of the 250 brands of pressure cookers. But it is not a large market. It’s worth just Rs 575 crore, and grows at a glacial 10 per cent every year. Compare that with the impressive stats of microwaves, a segment worth more than Rs 4,000 crore and still the single fastest-growing category in India’s consumer durables market. Are we looking at the slow death of pressure cookers? Is the old kitchen spirit on its way out?

After a generation of housewives in the 1970s and 80s embraced cookers as hi-tech cookware that made 10-minute-dal-chawal a possibility, their daughters are less impressed by the clunkers. As 25-year-old scriptwriter Ishita Moitra says, “Pressure cookers are just glorified saucepans.” Most women, even devout users, don’t really understand the object. Shubha, a 35-year veteran, still abandons the kitchen when her cooker is on the gas. “I was 15 when a pressure cooker came into my life, in 1962. My aunt brought it from London. She’d warned the cook that it should only be used with enough water, but I think he forgot,” says Shubha. What happened next would forever change the way Shubha interacted with the appliance. The pressure building up inside, the waterless-pot bursting, the lid flying in the air with so much force it seemed like a bomb had gone off. “The kitchen was full of steaming dal. It could always happen again.”

When it was launched in the late 1950s, the first newspaper advertisements pitched the pressure cooker as a scientific, practical solution for homely concerns. Which, of course, it is: when heat increases, water is converted to steam that is trapped in the sealed pot; the build-up of steam raises the pressure inside to levels 15 times higher than atmospheric pressure, which in turn raises the boiling point of water to 121º C, and at higher temperatures food cooks faster. And, unlike with microwaves, the process doesn’t entirely destroy the nutrient value of the food it cooks.

The science was meant to appeal to the husbands, who, marketers believed, would then influence their wives. In 1959, when Prema Raghavan’s 23-year-old mechanical engineer husband saw an advertisement for the contraption accompanied with an explanation of the juggernaut, he decided she had to have it. “There was some level of hydraulics involved and it seemed so scientific that he, being an engineer, thought it was a good gadget. I wasn’t convinced,” says Prema. Her husband not only bought a Prestige from Madras’ Jamal & Sons for Rs 90, he also joined Prema in the kitchen the first few times she used it.

Young men, it seems, still bat for the pressure cooker. Two-and-a-half years ago, when Sandeep, a communications and marketing executive at Dun & Bradstreet, set up his Bombay home with two roommates, their first purchases were a stove and pressure cooker (“The most critical part of our kitchen”).

In the six years that Gaurav Kanal was studying and working in Rochester, New York, he only came back to Bombay twice, but he had something that kept him in touch with home: a recipe book of his favourite dishes, handwritten by his mother. “That book was my bible, and it was my way of keeping in touch. My roommates had a pressure cooker, and we did all sorts of things, her special kari-patta chicken, rajma, chana masala,” says 30-year-old Kanal, who now runs his family’s real estate business. “Every Friday night my roommates and I hosted a party for 20-30 people with all sorts of dishes from my mother’s book. After we got the hang of it, waiting for the whistles became part of the fun of cooking.”

But many urban chefs—once torchbearers for the pressure cooker—are abandoning it for snazzier rivals. Rice cookers have a better personality, and microwaves fit better into modular kitchens and the lifestyles of nuclear families that ‘heat up’ everything from instant noodles to ready-to-eat biryani. If a new sort of convenience weren’t bad enough, cookers have to contend with the newfound health and taste-conscious Indian palate. Anyone who has travelled anywhere or has just partaken of a five-star food festival likes to think of himself as a foodie, and for foodies dal-chawal is a cop-out. They prefer grilled chicken to curry, steamed veggies to dal, baked lasagna to aloo-paneer, and you can do all three in a microwave-convection oven and none in a cooker. (But, FYI: Kitchen-queen Tarla Dalal knows the trick to get naan out of a pressure cooker.)

As with Bajaj scooters, Godrej almirahs and the Maruti 800, pressure cookers reflect us in another time, when a householder’s thrifty gene ensured the family’s survival, when it took months to get a gas connection—and even then an Indian family, of whatever size, was allowed just one cylinder. (Cylinders came into Indian kitchens in the 1960s, but supply was erratic and expensive, so many people kept a kerosene stove handy.)

A businessman called TT Narasimhan understood perfectly that a country such as this would love a vessel that used very little fuel to cook in the least time possible. Part of the Madras-based TTK family, Narasimhan founded a distribution company that introduced Indians to brands like Pond’s and Lifebuoy, better condoms and gripe water.

In 1955, TTK imported from the UK and sold its first batch of Prestige pressure cookers. It was called 77 Delight, a 5 litre cooker for Rs 77. “The TTK founder had a knack of picking the right products, and an understanding of India, which was a society of shortages,” says Chandru Kalro of TTK Prestige.

In those early days, it wasn’t easy to publicise the product, let alone show housewives how to use the confounding thing. TTK made 16 mm films with demos of the cooker, mounted the film, a screen and a projector onto vans, and drove through South Indian cities playing their amateur corporate video. When HD Vasudeva set up Hawkins Cookers in 1959, some of his first hires formed the Test Kitchen team, a group that was given the job of tailoring Indian recipes for a pressure cooker. “My grandfather knew his customers wouldn’t be making Bavarian stewed apples, they needed Indian recipes,” says Neil.

Customised, re-engineered and shepherded by its Indian manufacturers, this mechanism, born in France, christened a ‘digester’ by its inventor Denis Papin, unpopular in the West for its noise, temperament and bulk, came to become the mainstay of Indian kitchens. Hawkins and Prestige, both English brands, thrive in India even as their parent companies have disappeared. The secret of their success was women like Prema, now 69, who eventually hand-held her daughters-in-law into using pressure cookers, even passing on her faith in outer-lids. But her daughters-in-law aren’t true believers. They all have microwaves.