The Difficulty of Being a Green Spouse

Sneaking wrappers in without his knowledge, missing him desperately during pregnancy because he wouldn’t take a flight, the carbon guilt of owning a Scooty, and other survival tales of an environmentalist’s wife 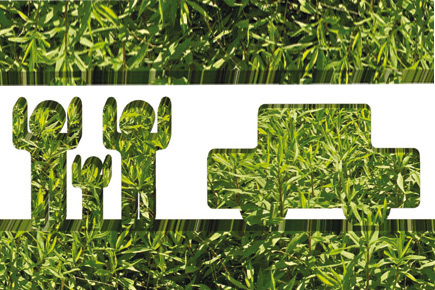 ­Sneaking wrappers in without his knowledge, missing him desperately during pregnancy because he wouldn’t take a flight, the carbon guilt of owning a Scooty, and other survival tales of an environmentalist’s wife


The only time Ruma seriously resented her husband was during her pregnancy. She was in Bangalore, where the couple are based, and he was frequently away on work during those months. But what really upset her was that he wouldn’t fly back to be with her over the weekend. Her husband, an agriculture campaigner with Greenpeace, believes in taking flights only if they are absolutely necessary. And being together over the weekend, she was dismayed to learn, was not something he was prepared to make an exception for. “I was very sensitive to that. I’m not from Bangalore and I don’t have any family here. I was pretty much on my own. I find hospitals very unnerving. Yet, even when I was really angry with him, I would understand his reason for doing it. But then, you’re not always rational,” she says.

As far as living the green life goes, her husband is pretty far gone. Transport must be public, the food organic; no brands, no AC, no geyser, and for the most part, no mobile phone, nor laptop (though these have reluctantly been adopted for the time being). Besides, he’s anti-capitalist too, so no MNCs either.

Ruma knew the deal right from the beginning. In fact, she was always a little impressed and more than willing to live his way of life. After marriage, she is possibly even more impressed because she sees what it takes to opt for such an inconvenient life. Still, she gets annoyed on occasion and sometimes has to sneak her shopping in and smuggle the wrappers out.

“The only reason Rajiv goes to departmental stores is to read information printed on the packages, like on tetrapaks of juice or milk. He always buys organic, even vegetables, not just atta and rice. Sometimes, he will buy veggies from roadside vendors, but never from supermarkets. But occasionally, I get stuff from Nilgiris [a retail chain in south India] because it’s not always possible to buy organic. It’s not that widespread yet. Then I come home, and quickly, quietly pour the things out of the packets before he can see them. A couple of times, though, he’s seen me taking the stuff out or found the packets. He’s never shouted, that’s not his style, but he always says, ’You know why I never buy from them’.”

Initially, Ruma felt the organic pinch a little: after all, a kg of regular atta costs Rs 20 while Fabindia organic atta is Rs 55 a kg. But she came around soon enough. What remains an issue of sorts is the taste of red rice. She can’t get used to it, the bigger size, the texture. “I don’t mind the recipes my husband has created around it. He’s a good cook. That rice, though, I still don’t eat.”

Mostly, however, Ruma participates willingly—indeed, happily—in what must be elaborate, time-consuming programmes. For their wedding, for instance, Rajiv insisted on cooking everything himself. The menu, naturally, was all-organic and consumed most of their slender budget. Rajiv, Ruma and a couple of friends cooked and organised everything for the 120-odd guests. “My parents were very amused. They wondered why he had to do it at all. Wonder, they still do about his way of life. But they find it endearing,” she says.

A more serious bump on the road was Ruma’s Scooty. Nothing other than public transport was acceptable to Rajiv; a two-wheeler was an extravagance. But Ruma suffers from motion sickness, and despite her husband’s gently-expressed disappointment, she held on to her Scooty (though not before a few uneasy rides to confirm she still had the condition.) To reduce her “carbon guilt”, Ruma laughs that she’s convinced Rajiv to share the Scooty with her. Now she drops him off at work, and he speaks wistfully of public transport from time to time.

Ironically enough, it is Rajiv’s work for Greenpeace that now requires him to fly uncomfortably frequently. It is also the reason why he has to spend hours at his laptop and on the mobile phone. In the days right before Bt Brinjal was launched in the market, Ruma remembers he’d be on the phone all the time. “He used to despise his brother for speaking on the phone for hours, now he was compelled to do the same. I remember being very angry with him at the time; I forget what the reason was now. It could have been one of our biggest fights, but I never got a chance to yell at him; he was always on the phone. By the time his work pressure eased, I had already forgotten what it was.”

There is also the uneasy dependence on private healthcare. Their baby was born in a nursing home, because, after all, it might’ve been too risky to leave that to conviction. Yet, Rajiv’s resolve remains largely unaltered, as does his penchant for marvellously elaborate projects. After the birth of their daughter, he sourced organic coconuts and extracted the oil himself through a process that lasted many hours for the newborn’s massage. When that oil was exhausted, he cheerfully repeated the process. Diapers, quite naturally, were banned—until the couple reluctantly concluded that cloth nappies were keeping the baby sleepless. Only now, after four months of fitful sleep herself, has Ruma given in to the idea of diapers at night. Rajiv, she knows, isn’t too pleased, but he doesn’t say anything; he just rolls his eyes every time he catches sight of a pack of diapers.

The challenge will get stiffer as the child grows up, given that it has already been decided that hers will be a blameless, Coke-free life. An unbranded, junk-food-free childhood can be safely predicted to be a stormy one for the parents. Ruma, nonetheless, is fairly confident of her husband’s persuasive powers.

Her biggest problem, really, is the friends. Not Rajiv’s friends, they’re all avid green troopers like him. But Ruma’s circle, a regular bunch working for big media, stopping by at Barista, listening to iPods. Her husband resolutely turns down invitations to big restaurants and malls; he’ll hang out only if they come home or go to his kind of guilt-free place. She doesn’t mind going all by herself; what’s tough is holding on to the beliefs she shares with him. “How many times can you say you don’t want Pepsi? I don’t get a chance to speak at length like this about my lifestyle choices. They ask me why I don’t like Pepsi. How do you explain these things?”

At the heart of this story is a question: what does it mean to commit to a difficult choice? More importantly, what does it mean for the people in your life? A couple of years ago, I became a fanatical healthy eater myself. Of course, this was tough for me (a diet of greens can give you a really short temper), but it was far more painful and irritating for my family. At get-togethers, my ice-cream abstinence would swamp the others with guilt for the evening. It made me unreasonable too: recently, when my mother came to visit, I asked her to make rotis only for me at the end of a long day. Everyone else was okay with rice. Doubtless, mine is a selfish choice, quite unlike Rajiv’s. Still, the question remains: what do our convictions demand of others?

Mortified of becoming green celebrities, yet another unintended consequence, the couple in the story request that their names be changed