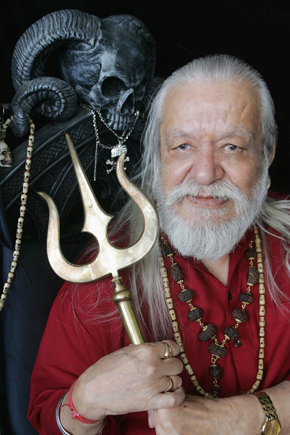 
DAVENDER GHAI IS 70 years old, a sick Sikh gentleman from Newcastle, UK, whose last wish is that his body be cremated after death. Only, he wants an open-air cremation, not for his body to be volted to ashes in an electric crematorium. A simple wish, but for an equally simple fact that open-air cremations are illegal in Britain under the Cremations Act, which permits them only in designated electric crematoria.

And therein lies a controversy Britain has been grappling with since the First World War. For the present, the story begins in mid-2006 when the body of an Indian immigrant was fished out from a canal outside Slough in west London. The bloated corpse defied identification. The police, however, found a mobile phone in a trouser pocket. They managed to retrieve the last call made from the phone. It was to the Anglo-Asian Friendship Society (AAFS), a charity based in Newcastle. Davender Ghai is the society’s founder.

The body was subsequently identified as belonging to Rajpal Mewat, reported drowned six months earlier. Flying Mewat’s body to India for the last rites would have been an expensive affair. Yet, his family longed for a traditional cremation.

Ghai had by then caught the UK government’s attention with his demand for Hindus and Sikhs to be allowed open-air burning as it is the “most spiritually appropriate way to release a soul from the body following death”. He is Ugandan-born and living in the UK since 1958. He leads an ascetic life and has a long list of devotees who attend his religious teachings. The self-made defender of Hindu cremation rites is also the winner of the Unesco Peace Gold Medal and an Amnesty International lifetime achievement award.

On 11 July 2006, Ghai arranged for an open-air pyre for Mewat at Stamfordham in Northumberland. And when the pyre was lit, it was recorded in the British media as “the first British religious funeral pyre in modern times”.

The local police initially approved the open-air cremation, but backtracked a day later. The media recorded what the then police superintendent Graham Smith said: “In respecting the values and beliefs of all faiths we did not wish to cause any additional upset to a grieving family. This meant all our inquiries were carried out in an extremely sensitive manner before the service got underway. Following further investigation,
we believe offences may have been committed under the Cremation Act 1902 in relation to where human remains can legally be cremated.”

However, Ghai believed otherwise. He sent an application to the Newcastle Council, requesting land for open-air cremations. The Council ruled that the cremation of human remains anywhere outside a crematorium was prohibited under the Cremations Act. In September 2006, Ghai challenged the Council’s decision in court. In 2007, a high court judge granted Ghai permission for a full hearing because there was evidence to suggest that “the burning of dead bodies in the open air is not necessarily unlawful”. The London high court heard the case between March 22-24, 2009. The judgment has been reserved, with the judge saying it will be given as quickly as possible.

Ghai says he has lived by religious traditions all his life and would do so till his death; indeed, even after it. “I do not want to be cremated anywhere else other than in an open-air crematorium, according to our traditions. That is why I am desperately waiting for the high court decision. Until then, I cannot have peace of mind while my soul itself is in jeopardy.”

He has two points to make. One, that he tested the law during Mewat’s open-air cremation which was not disallowed by the authorities. Here, he also argues that British authorities had themselves allowed open-air cremations in 1915 and then again in the 1930s. He is referring to the open-air cremations of 53 Hindu and Sikh soldiers in Brighton in 1915. A memorial still stands at the spot of the cremations. These Indian soldiers had fought on Britain’s side in the First World War and died of wounds in hospitals around Brighton.

In 1934, the body of a princess of Nepal was cremated in a field on the bank of Basingstoke Canal adjoining a crematorium in Woking. In 1935 and 1937, the bodies of two staff of the Nepalese Legation in London were similarly cremated. In his book Encyclopedia of Cremation, well-known British academic Lewis H Mates explains why these cremations had been allowed. “Both in 1915 and the 1930s, political considerations determined the flouting, or bending, of the law. In 1915, it was important to counter anti-British propaganda in India by catering for the social and cultural needs of soldiers who had, in effect, been dragooned into a war far away from home. In 1934, Nepal was a very isolated and enclosed country. It had a titular monarchy and a dynastic prime ministership. The Nepalese legation had just been established and at its head was the Nepalese prime minister’s son. Failure to secure that the Rani was cremated in accordance with the rituals of Nepalese Hinduism would have had disastrous consequences for his standing and that of his family in Nepal…”

The second issue Ghai raises is that while “Muslims and Jews have been allotted separate burial places”, afterlife rituals of Hindus should also be equally respected. Says he: “We are a model immigrant community and we expect to dispose of our dead according to our rituals.”
One of Ghai’s lawyers, Professor Satvinder Singh Juss, told Open: “The primary argument is that an open-air cremation here is a ‘manifestation of a belief’ under article 9 of the Human Rights Act, that the government wrongly interferes with it by having a blanket ban, that the existing domestic legislation under the Cremation Act does not make it unlawful, and that the ban infringes the Race Relations Act (as amended).”

Justice Secretary Jack Straw intervened in the case, arguing that while open-air funerals are prohibited
under law, Ghai’s human rights cannot be said to have been infringed upon, as interference is justified on grounds of public health, public safety, public health and public morals.

Ghai counters saying that environment agencies had already conducted tests and confirmed that the smoke from open-air pyres is non-polluting. The said tests were carried out during open-air burning of cattle carcasses during the outbreak of foot-and-mouth disease in 2001.

The Newcastle council tried a compromise, offering that mourners could stay in the designated crematoria to watch the entire process. But Ghai is unbending. “If I compromise, it will have a devastating effect in my afterlife.” British Hindus or Sikhs have so far not officially complained about having to use electric crematoria, though there is a continuing debate on the issue in media blogs. While some of the bloggers agree with Ghai, they do say his demand goes against the grain of ‘British multiculturalism’.

Some Hindu forums are vacillating. The UK Hindu Council has suggested a compromise that would allow family members to attend a small cremation which uses an open-topped coffin. The Hindu Forum of Britain has said that open-air cremations should be allowed, but only if they are made legal and abide by health and safety rules.

However, the Hindu Academy of UK has termed Ghai’s demand “ludicrous”. Academy director Jay Lakhani says: “The credibility of Hinduism is at stake because of his demand. It is a retrograde step. Electric cremations are hygienic. But if Ghai’s demand is met, not only will Hinduism be seen as a dark-age religion, it will also signal the emergence of ‘priest-craft’, whereby people can be coerced into thinking that what they are saying is right.”

Ghai’s lawyer Professor Juss observes: “There is no suggestion here of imposing this on anyone else. Nor is there a suggestion of wanting to change the way of life of British people in this country. All that is being asked in the interests of human rights, pluralism and tolerance is that a democratic state with liberal credentials should make provision for this rite of passage on death. Other people who feel that way may follow (although all of us know that the take-up rate will be low) but at least it will be legal then to do it. At the moment, it is not legal according to the State. If Mr Ghai goes ahead, he risks prosecution.”

Ghai says he is not afraid of the risks or his critics. He says his claim may be provocative, particularly “in a nation as notoriously squeamish towards death as our own, but I honestly believe natural cremation grounds will not offend public decency if they are situated far from urban and residential areas”.

Britain being Britain, and Indians being Indians, there are other opinions as well. British-Indian author Satnam Sanghera, who writes for The Times, counters Ghai’s campaign in a signed article: “I agree that Britons are overly squeamish about death as a rite of passage, and that the Asian approach is healthier. Indeed, I think almost everything about British Sikh funerals is better than the uptight English alternative. Except for one thing: the manner in which the corpse is handled. It is also traditional for close relatives to go to the mortuary before cremation and wash the corpse, which, as well as the challenges of smell and hygiene, raises the question of whether you want your loved ones to see you for the last time as a naked, defrosting corpse. I wouldn’t. Neither would I, nor, I suspect, most British Asians, want to be remembered being barbecued in a field somewhere on the outskirts of Newcastle.”