Stranger in the Mirror 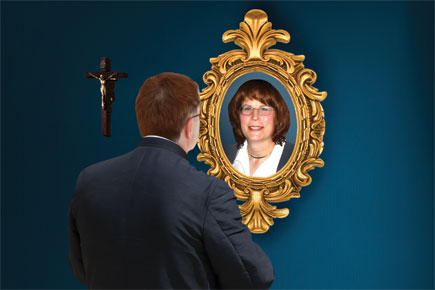 
SYRACUSE, US ~ It was one of those still summer nights when sweat trickles down your back. I sat at a table in her house, and tried to make light of the goodbye. I had known her for almost a year. I was then a stranger in this city, a student trying to write Frances’ story.

When I had walked into that cramped space, I had seen the shopping bags, red and pink lace brassieres strewn around. She hadn’t even cut off the tags.

“I got the unemployment allowance. Thought I’d buy these, and celebrate the new woman I am,” Frances said. Her voice was deep and hoarse. It gave her away. She wasn’t there yet. Not fully. But money was tight. She would wait for things to get better.

Dinner was split pea soup and patties. I had carried a few canned soups and sundry other stuff. I was moving to New York City, and had asked her if she would like me to drop off something.

“Anything helps,” Frances had said.

I had first met her at Carousel Mall in Syracuse. When I returned, I tried wearing the “wrong shoe on the right foot” as she had said. I couldn’t walk. Unsteady, swaying, I tugged at the door and stood there.

“Blisters,” she had said. “When you wear the wrong shoe, you get blisters. It pains. It has been like that for me.” For 53 years, Frances Mary Fischer wore the wrong shoe on the right foot. She wore the male body. The soul was always a woman. Even as a child she had traded her bicycle for a neighbour’s doll. As a man, she always had a wardrobe full of women’s clothing. She would dress as a woman once in a while and go hang in the basement of a church with others who wanted to be there. But except for those stolen moments, she would live in the disguise of a father, a husband, a man.

“Maybe my mother knew,” she said. “My birth was fraught with little miracles. The umbilical chord was around my neck. I could have died. At three, I was run over by a car. It crushed my mid-section. It made me a eunuch. My mother considered it a sign.”

Frances remembered wondering as a child why she did not have a vagina. “I was desperate to know why I was not like my sisters,” she said.

The siblings used to sing ‘Franky’s going crazy…’. They would torment her. I called Frances’ brother, Jerry Fischer, in Iowa Falls, and he told me how he was still struggling with the idea of his handsome brother choosing to become a woman. Jerry faltered between ‘he’ and ‘she’, while referring to his brother.

“To me it is very strange,” he said over the phone. “He was a brother, a wrestler, the guy who had helmets and grenades. I am trying to figure what the heck. She is my brother. I just ask why. Probably he hung out with the wrong crowd.” Her mother pushed her towards priesthood. When evil is inside you, she said, you seek shelter in the church.

“I am evil,” Frances said, when we met at the Onondaga Public Library one afternoon. She used to be a Roman Catholic priest when she was a man. For years she struggled with the ‘evil’ inside her.

“Christ is the high priest between men and God, not the priests,” she said to me at the library. “When I realised this, I said I can no longer be a Roman Catholic priest because this is not what God said.”

Her questioning of the Roman Catholic belief also made her write her Ph.D thesis on the “fallacies of the Catholic Church”. “The dichotomy was there. Deuteronomy 23 (of the Bible) says a man should not put on what pertains to a woman,” she went on.

She still clung to the faith and went to the archbishop of Dubuque and asked him what to do. She even got married, rebelling against body and soul. Wife Diane used to sing in the choir. First child David died, and the couple moved to Syracuse to be with Diane’s family. They got divorced in 2001. The same year, Frances applied for a change of identity. Religion forbade her transition, but she held on to her faith, switching from church to church, looking for a more benevolent version of Christ, a more accepting God.

“I believe I am a product of Satanic influence. God would not want to put somebody through this torment,” she said. “God allowed Satan to mess with me. But all the evil is in the world. It is allowed by God.” At the time, she was attending the Believers’ Chapel in Cicero, a church that welcomed the LGBT community but sought to change their lifestyle.

Frances told me belief was beyond the need or desire for sex. It was about identity. She even said she thought she was asexual. Christ was the healer. He wanted everyone to live. She kept touching the cross that hung from a chain around her neck. Perhaps for reassurance. She had lost her job, and had been collecting money to survive. It hurt. All I could do as a student interested in her story was listen to her. I worked in coffee shops and delis to pay for my bed and board. I would sometimes carry donuts for her, but could never bring myself to give them to her. She did not want charity.

Frances started her official transition from male to female in August 2001, when she applied for the name change at the Supreme Court for the County of Onondaga, as per the affidavit filed by her in June 2003. It had to correspond to the change in gender. She sued New York State for her right to change her name. (The judge had initially declined the name change request, but she won the case) It took her two-and-a-half years to change her name from Frank Mark Fischer to Frances Mary Fischer.

In the interim, she lost her job at Alliance Relocation Services. Frances said she told her employer about her transition. He was okay with earrings and rings at work, but not dresses. “Are you trying to win a beauty contest? he asked me. I said I was trying to be myself.” She was asked to quit. She fought to keep her job but failed. She put it down to discrimination against transgender people.

She tried to find other work. She had two doctorates and had been an adjunct professor at Onondaga Community College. A couple of interviewers told her that they could not give her the job because other employees may have problems sharing a bathroom or her presence might even interfere with their religious beliefs.

“I can’t get a job because I am transgender and I am open about it,” she said. “Your qualifications go away in a snap. They won’t even give me a job to usher in people or clean tables. It is a hard life.”

She was still managing with her disability allowance. It hadn’t got to the stage where she would have to sell her body.

“It is good that I have not shot myself in the head. Maybe this is because of my background as a priest,” she said.

I first travelled to the US in 2005, to attend journalism school in Syracuse University, to learn a thing or two about writing. In news reporting class, they asked us pick a beat. I chose LGBT out of curiosity about a small news item I had read in the Syracuse Post Standard about Frances suing New York State.

I called her and she agreed to meet me at the mall. She was sitting in a corner in a powder blue sweater and skirt. Only her voice was a leftover from her previous life. That, she said, would be taken care of later.

We got coffee, and she spoke about the case, and later about her newly acquired breasts. “Too big. Wasn’t intending for such big breasts but something went wrong with the surgery, and now I have to deal with these,” she said.

“Do you want to come to the restroom to see the other parts,” she asked. I declined. She was excited about her new body, but I was nervous to be the chosen witness of this miracle. “I trust you. I know you are a woman,” I said.

It was my first time, meeting with a transgender woman. Once when I was a child, I had seen a eunuch pull up her skirt near a bus stop. And I had gasped.

Frances had waited for her children to grow up before deciding to transition into the female body. “Now is the time for me to blossom,” she said. “The pain of remaining in the bud is more than the pain of blossoming. I feel better now. I don’t hate what I see in the mirror.”

Another time Frances told me how even after a thousand surgeries, she wouldn’t be a complete woman. Years later, as I sat in a cab with Gouri Sawant, a transgender activist in Bombay, she looked me up and down as we waited at a traffic signal. “You got it for free. That body, I mean,” she said. “We will never get there. But anything helps.” Most people associate transgender people with drag queens, gays, lesbians and cross-dressers.

“They think we are prostitutes and have diseases,” Frances said.

But how does one get there? It costs money to look like a woman. Surgeries are not covered by insurance. “It gets so lonely at times. It is depressing. Sometimes, I want to cuddle with someone on the couch and just watch television,” she said, when we met the second time.

For eight years now, I have been trying to understand the pain of remaining in the bud. I kept meeting Frances even after the class project was done. Over the years, I also met many other extraordinary people. Street children who dreamed on despite the drugs and crime and abject poverty of their life; sex workers whose bodies had grown so old they would sell it for Rs 20 and buy cheap liquor to get through one more night; refugees who longed for home… But Frances was the one who taught me what no school could ever teach—learn to live with loss. Rejoice in everything. Even in the wrong body.