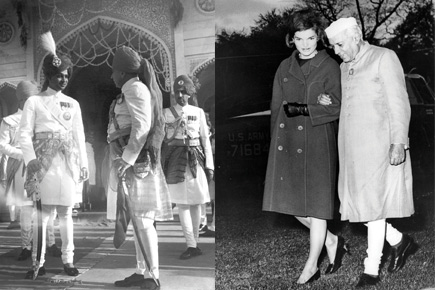 
A bundgala? What is it? Would people understand what it is? A fashion magazine editor had once asked this while I stood gaping in horror. My answer didn’t really communicate the significance of the bundgala, but it did convey the outrage. Fortunately, he backtracked.

The fact, as you may have gathered from the opening paragraph, is that it’s not easy to write about the bundgala, even though it has had praises heaped upon it so high that they stop just short of being sonnets. We could broach the topic of how the bundgala is timeless, like the Taj, Sophia Loren or Rekha—but that, too, would be old hat.

Fact is that everything else said and done, the bundgala remains one of India’s most valued fashion exports to the West, followed closely by the kurti, the bandhini and practically every pattern from Rajasthan that could be sent out on a runway. What is also a fact is that the bundgala, which has become synonymous with India and Indian traditional wear, has never really been all Indian—it was always something of a fusion.

Designer Ritu Kumar notes in her book, Costume and Textiles of Royal India, that the bundgala and sherwani came into existence and began to be worn only in the mid-19th century. Kumar argues that the bundgala and sherwani were India’s answers to the British coat; a step-up from the traditional angrakha that incorporated buttons and cuffs, which no Indian costume had until then. From that point on, it was a runaway success with tailors worth their weight in gold.

It was worn by the greatest band ever (The Beatles), Bond villains and even Bonds; we have a Prime Minister who always wears them on formal occasions; and they’ve been responsible for the sacking of at least one Home Minister (Shivraj Patil), whose love for the bundgala over-rode his concern for terror victims. The bundgala has managed to endear itself to many designers in the West in more forms than can be counted, and the fact is that desi designers had little to do with the success of India’s most famous fashion export. It was Monsieur Armani who carted it in the 1980s to the West, where it won hearts and wardrobe space. He has since conferred permanent residency on it in his collection.

In stark contrast, in India, as designer Ravi Bajaj says, the bundgala had been stereotyped. The European suit was becoming a corporate staple, while the bundgala continued to be the attire of drivers and hotel staff, all in all not something the ones with cash would wear. Worse, it got typecast with politicians, who, since Nehru, have hardly been known for their sartorial sense. The politicians who took centrestage were also responsible for the typecasting of the bundgala with the middle-aged, their paunches and bank accounts competing for supremacy.

But before it went downhill, Jawaharlal Nehru’s love for the bundgala and the rose placed it on a pedestal. In fact, a reference to his tailor, the legendary Mohammed Umar, also finds mention in his biography. Umar, who had just then stitched clothes for the King of Saudi Arabia and Shah of Iran, once asked Nehru for a certificate. Nehru asked why he needed his certification if he’d already got it from royalty itself. The quick-thinking Umar shot back that Nehru was a king too, since he ruled people’s hearts. Nehru retorted that these days, the heads of kings are cut off.

In any case, the bundgala became an intrinsic part of the halo of romance surrounding Nehru. So much so that the sleeveless bundgala often worn by politicians even took on a new name, the Nehru jacket, despite the fact that the former Prime Minister mostly wore achkans and sherwanis. The Nehru jacket is still associated with politicians, but now thanks to a younger lot of with-it politicians like Sachin Pilot and Jyotiraditya Scindia, it is again entering the corridors of chic.

The bundgala has also been referred to by another name, the Jodhpuri jacket, as a testament to the supremacy of Rajasthani tailors. This lives on to this date in the works of fashion designers Raghavendra Rathore and Rajesh Pratap Singh. The Rathore bundgala is now one of the most coveted Indian possessions, a wardrobe must for the well-off, sartorially-aware Indian. As a result, it now appears with regularity, often bordering on obsessive, on all fashion week runways and in just about every collection. It’s been invented and reinvented. Designer Arjun Khanna has done more with the bundgala than anyone else (eight of every ten big ticket weddings have him designing the trousseau)—from giving them a grungy look to making them in denim. Rathore and Singh have even made them in chic linen for the summers. Its length, too, has been experimented with—the new bundgala is a moody creature, which can end just above the derriere, cut like a sharp suit, or can be longer. You’re now encouraged to keep your bundgala open, to wear it with a collared shirt and cravat. Some designers have even attempted, with less success, to mirror the war of buttons happening in the boardroom and showcased the bundgala with not five buttons, as is traditional, but with one or two buttons.

But somewhere in between it all, the unthinkable has happened—at least for the tailors who came up with the bundgala in the first place. It stepped out of the man’s wardrobe and into those of women. As part of a larger migration from the male closet that includes everything but the Y front (only because they don’t have any use for it), the bundgala began to be tailored for women as well. Runways even at the recently-concluded Wills Lifestyle India Fashion Week testify to this. It had as much to do with women’s power dressing as with the play of the masculine feminine. Designers would even have you believe it mirrors the accession of women into power with the passing of the Women’s Reservation Bill. But the fact is women in the Nehru jacket have been peddling such desi chic for at least six seasons now (give or take a couple), and it’s done jolly well.

The bundgala, though, owes a large part of its popularity and new millennium revival to its versatility and the rise of casual formalwear. As designers increasingly made the bundgala more and more chic (no bundgala, for example, is now complete without a pocket square), they also made it more casual. It was advised-wear at formal dinners (why, it even made an appearance alongside gatecrashers at the White House banquet hosted for Manmohan Singh) and was advisedly even given a chance to be worn over something as glaringly brash as denims. It could also be worn with Jodhpuri pants, which, too, the West owes to India.

Now, as designers see it, the bundgala is slowly but steadily regaining lost ground. Waiters, chauffeurs and hotel staff have switched to more Western attire like waistcoats and bow ties, clearing the way for the bundgala’s return to the wardrobes of the chic and well-heeled. Tragically, though, nursing a hope that the bundgala will replace the corporate suit would be delusional. The point to remember, however, is that the bundgala isn’t at war with the suit. There never was a comparison—everyone wears a suit, but the bundgala isn’t for everyone. It’s snobbish and exclusive, and yet, the one thing Indian everyone in the West knows as Indian, even the sceptical fashion editor mentioned above.