Shadows on the Sand

And a temple where they pray to a motorcycle 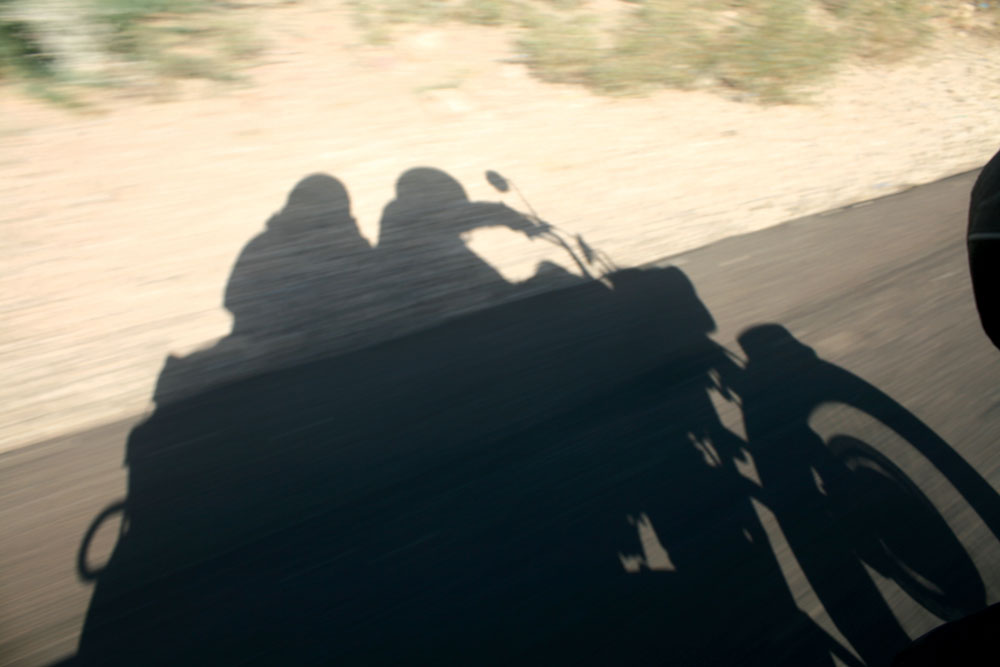 WHEN MY FRIEND Anand announced that he had decided to celebrate the 10th anniversary of his bike, a Royal Enfield Bullet 350 cc, by setting off on a long ride to the Indo-Pak border in Rajasthan, before he knew it seven of us had piled on. I didn’t exactly fit the eligibility criteria because everyone else was a veteran biker. I would be riding pillion but this was as good a time as any to get initiated into the world of biking.

Anand had planned for two weeks with an itinerary covering almost all of Rajasthan. But with us joining in, the trip duration whittled down to eight days, Saturday to Saturday. He had his heart set on going via Jaisalmer to the Indo-Pak border close to Tanot and the nearby village of Longewal, where our Army heroically repulsed the Pakistanis during the Indo-Pak war. We added one more destination—the Jawai Bandh dam about 500 km away, where the Jawai Bandh Leopard Conservation Reserve could get us sightings of the elusive animal. All in all, we would be covering 2,500 odd km taking each day as it comes without detailed fixed itineraries. I was patiently explained the riding philosophy—‘All free and flexi. The journey matters, not the destination.’

We set off from Mumbai towards Jaisalmer on a Saturday morning last December and I was almost immediately broken into the joys and travails of long distance bike rides. If it was cumbersome putting on the gear—gloves, riding jacket, helmet, knee and shin guards—it took longer to come to terms with the stiff back and sore bottom at day’s end. In between there was the exhilaration of cruising at 90 kmph and the cheap thrill of wriggling past cars queuing at toll booths and stuck in traffic jams.

The riding pattern was simple: try and keep two bikes in your sight, one ahead and one behind. If any one got into trouble then they were covered. The lead biker is the scout who checks out good places to eat, fill petrol or halt, and guides the others. Sumeet, on his Triumph Tiger 800, and Ashdin, on a KTM Duke 390, rode the fastest bikes, capable of doing 200 kmph easily. In the group, they played the role of sheep dogs darting back and forth to keep the flock together.

As we neared Jaisalmer by the third day, the countryside spread out flat and arid with intermittent sand dunes. Orange and white windmills dotted the road and we came across an army convoy with trailers ferrying tanks. A sprawling fort perched on a hillock dominates Jaisalmer’s cityscape. Its scale and grandeur is overpowering and cocooned within its fortified walls and numerous bastions is a labyrinth of narrow lanes cramped with old houses and havelis, shops, temples, a lively mix of the ancient and the current.

We made our way past beautifully carved arched gates, climbing the cobbled streets to the top of the fort in search of Surja Guest House, an old haveli converted into a hotel. The internet had told us the place offered a panorama of the city with sizeable rooms at wallet-friendly rates, ranging from Rs 550 for a double bed to Rs 1,000 for triple occupancy. From our room’s jharokha (window), the view was almost 360 degrees. We could see the massive fort walls, bastions, the Maharaja’s ornate palace, maze of yellow houses and beyond it, in the distance, a small lake.

But we wouldn’t be seeing much of it. The light was fading by the time we had settled in, and we went for a walk that took us past antique shops and eateries. We came across a government-recognised shop that sold bhaang in mild, strong, extra strong intensities. I tried mild and it did nothing to me. I ended the day sitting on an old cannon on a turret close to the hotel overlooking the twinkling city lights below.

The border was about 120 km away and as we weaved out of the city next morning we heard the screams of Indian Air Force fighter jets flying overhead, setting the mood for the visit. Before the border there was the village of Tanot with the temple of Tanot Mata. We pushed on towards Border Post 609, about 15 km from the temple, after clearing our papers. The ride turned enthralling after that, with good winding roads that curved through shrub land.

Border Post 609 was a one-storey tower with two BSF jawans on duty. A small cabin on top had a mounted Light Machine Gun. We could see through binoculars the Pakistan outpost station in the distance. The entire border has been fenced by India with floodlights placed at regular intervals. Beyond the fence and no man’s land, the terrain was similarly arid and desolate.

The dunes were underwhelming. They were spread over so small an area that from the crest of any one, you could likely see the flat desert landscape

We returned to the temple at Tanot. It has an interesting story around it. During the 1965 Indo-Pak war, several bombs targeted the temple sheltering a small contingent of Indian soldiers. Not only did none hit them, even those that landed in its immediate vicinity didn’t explode. And, of course, they credit it to Tanot Mata. It was late afternoon when we bid goodbye to Tanot and headed to a tented resort at Sam Sand Dunes about 130 km away. We rode silently under a blanket of stars to the steady thump of the bike but the spell was broken as we neared Sam Dunes Road where a line-up of brightly lit resorts on both sides blared folk and Bollywood music. As we checked in at the Mika Rai Resort (we had been offered a deal of stay, dinner and jeep safari at Rs 1,200 per head by a persuasive gentleman we had met at Surja guest house) music from three adjoining camps competed with the folk singers in action at our place—certainly not my idea of a night in a serene desert camp.

Next morning, we went to the dunes, a 15-minute drive away, and arrived just in time to witness a spectacular sunrise. But the dunes themselves were underwhelming. I had imagined a vast expanse of undulating sand rising and falling as far as the eye could see, but they were spread over so small an area that from the crest of any one, you could likely see the flat desert landscape. But the sand dune bashing made up for it with our driver manoeuvring the jeep for some thrilling descents, climbs and sharp turns. Later, while we were having tea at a stall, locals tried to hard sell a safari on their camels to see the spot where Salman Khan had shot for the movie Bajrangi Bhaijaan.

Around 10 am, when we were all set to ride out for Jodhpur, Anand’s bike refused to start and the problem was identified as a drained-out battery. The guys came up with a solution of starting another Bullet and then exchanging the batteries with Anand’s bike so that both would run. Later, we got his bike fixed in Jaisalmer and by early afternoon were on our way to Jodhpur about 200 km away.

WE SET OUT for Jawai Bandh and about 40 km from Jodhpur, near a place called Chotalia, we came across a temple, perhaps the only one in India, where the reigning deity is a motorcycle. The Bullet Baba temple is a small shrine just off the highway with a raised platform displaying portraits of one Om Singh Rathore. His Royal Enfield Bullet 350 is enshrined nearby in a glass case.

The story goes that Rathore, who was returning to Chotalia village at night from a town called Bangdi, lost control of his motorcycle and died crashing into a tree. In the morning the police took the vehicle to a nearby police station. The next morning the motorcycle was not there. It was found later at the accident spot. The police once again seized it, emptied its fuel tank and locked it with chains. The next morning it had again disappeared only to turn up at the accident site. The motorcycle kept returning to the same spot until the locals decided that otherworldly forces were at play and began to worship the Bullet because they believed that the spirit of Rathore was in it. They christened him Om Banna and he is now said to help people in distress, especially travellers.

They temple was built later. The tree into which Rathore crashed his bike is also worshipped and adorned with offerings of bangles, scarves and threads. Some devotees offer small bottles of alcohol. Shops nearby sell tapes and CDs with folk songs in the name of Om Banna, besides charms, rings, key chains and his pictures. It is said that a person who does not stop to pray at the shrine is in for a dangerous journey. Perhaps we did not pay our respects in the correct manner—around 25 km from Sumerpur, one of our Bullets broke down and had to be towed.

At Sumerpur near Jawai Bandh, we settled in a hotel and arranged a leopard safari for the next morning. The Leopard Conservation Reserve is mostly private land belonging to erstwhile princely rulers and is their initiative to conserve wildlife. It has a few camps and upscale resorts. Safaris are run by private operators and ours cost Rs 8,000.

It was money well spent because none of us had seen a leopard in the wild before. It is one of the most elusive big cats. Sightings are not so easy and we had only that morning to test our luck before beginning the ride home. We had ridden 400 km to Jawai Bandh from Jaisalmer, dispensing with more popular tourist destinations like Jodhpur and Kumalgarh.

In the pre-dawn darkness we sat shivering in the enclosed jeep, jostling 20 km towards the leopards’ abode. The driver took a dusty track towards a hillock, the known territory of a leopard. As we neared a small hill, we heard that the leopard had crossed the path ahead sometime ago. We waited for half an hour before our driver decided to head to another spot facing a rocky hillock.

As we approached, we saw three other jeeps lined up on the road facing the hill and its occupants staring intently at the top. Soon, a mother with her two cubs came over the crest walking slowly down. The cubs ran around her frolicking and chasing each other. She sat down on the rock in the open, basking in the sun. There was a group of peacocks close by and the cubs made playful charges at them, retreating when the birds moved towards them. The family of leopards moved about leisurely on the rocky escarpment, at times disappearing behind the vegetation, then appearing again. We got to see their antics for more than half an hour before they finally disappeared under a rocky overhang. Two days of hard riding to cover 800- plus km back to Mumbai awaited us, but at that moment we knew that coming here had been worth it.

On the ride home Archit’s words echoed in my head, “Damn, India is a large country, diverse and yet so beautiful,” and I was already dreaming about another biking adventure along with the warm shower and hugs waiting for me at home.