Seers of the Computer Age

Just how perceptive can the visually impaired be? Thanks to technology, more than you’d imagine 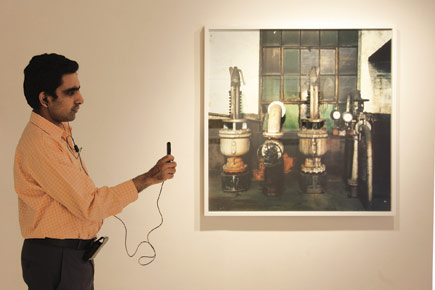 Just how perceptive can the visually impaired be? Thanks to technology, more than you’d imagine


It may seem inconceivable at first. But how does a blind person get by in a world that now lives, works, plays, loves, and in all probability eventually dies in front of monitors. Imagine not being able to google. Imagine not being able to send an SMS. How does a blind person remain connected in a society that types and reads off screens more than it talks and listens. How could Braille technology even begin to keep up in the multi-lane information highway that generates data at multiple kilobytes per second.

Well, you’d be surprised how well in touch they really are. Modern tools of the wired world are nothing if not adaptable, with cellphones and computers being encoded with miracle software to do what we thought cannot be done: make the blind ‘see’, virtually speaking. It’s a revolution, with livewire liberty leading the way.

THE SOUND OF MOUSECLICK

The sound of music was sound at its best, once. To Suman Rath, sound is now access. A third-year English honours student at St Stephen’s college in Delhi, he uses a special screen reading software called Jaws (Job Access With Speech) on his laptop. At Rs 40,000, it’s an Ageexpensive installation, but well worth the money. Suman navigates his way around the screen by attuning his ears to the audio relay of his cursor movements, as he manipulates his mouse on the touchpad. Just as he has a touch-and-feel familiarity with the keyboard, he knows the overall screen layout and its basic clickable functions through day-to-day habituation. Jaws voices what he types aloud. And when he logs on to a website, the software reads out every link on the page, granting him a menu of choices. Suman uses his laptop to read his course material, browse the Internet and write essays.

There is another software that Suman uses a lot, loaded onto his Nokia 5320. Until a year and a half ago, he could only use his mobile phone to answer calls. But after he installed a screen-reading software called Talks (Mobile Speak being the other popular option), he finally joined the widening world of text messaging. Not just that, he now has a contact list, and is able to set alarms and reminders. “In the US,” says the 21-year-old, “telecom service providers offer screen-reading software at attractive price packages. That should happen in India too. And mobile phone companies here should make available handsets that are bundled with these.” Anyone listening?

Alas, for now, the cheapest Talks-compatible phone is for a rather steep Rs 6,000 and the software another Rs 4,000. Madhu Kaushal, assistant manager of training and development at IBM Daksh, has an interesting story to tell about how she used the mobile phone before screen-reading software became available in India (around 2005). “I used to do a lot of guesswork. I would memorise which key to press how many times to go to, say, the alarm. The mobile phone was anything but accessible to me.” Then she got Mobile Speak. Incidentally—or perhaps not—her husband Dinesh Kaushal works for Code Factory, the Spanish company that developed Mobile Speak.

“For the first time, I could read an SMS on my own. I could maintain a contacts list, create and edit groups, create settings, make calendar entries and so on,” says Madhu, clearly excited about the way her life has been eased.

Listening in on the conversation, Dinesh has an observation to make. “Accessibility to SMS actually allows more integration socially,” says the husband, “She can now simply message her boss if she is going to be late. She can read messages that her colleagues or friends send her.” Now Madhu can also show her friends photos on her phone because the screen-reading software makes it possible to name and edit the images.

The man with the wonder gadget from the future, however, is Mohammed Asif Iqbal, a Kolkata-based consultant with PricewaterhouseCoopers. He has the latest breakthrough in ‘print technology’, as it’s curiously being touted. His snazzy Nokia N-82 has a copy of KNFB Reader, a sharp piece of software that enables him to read text on paper placed in front of him—in an instant, or nearly so. All he has to do is take a snapshot of the document with his phone, guided along by the KNFB Reader, and it begins reading the document aloud in about 30 seconds flat.

“My work takes me to a lot of government offices. And often, I am given hard copies of documents. Earlier, I would need someone to read out the document to me or get a soft copy,” says Iqbal, with a renewed sense of self-empowerment. It means the world to him. Onlookers may find it strange to see a man take snaps of menus at restaurants, or newspapers on flights, but it has liberated him of an earlier dependence on the agency of others, and his relief is palpable.

“The KNFB Reader is essentially an optical character recognition software which is speech-enabled and can be loaded onto the cellphone,” says Sam Taraporewala, director of the Xavier Resource Centre for the Visually Challenged in Mumbai, which uses the software extensively. “The beauty of the software,” he adds, “is that with a click of a button, you can photograph a page and the software will analyse the image and read it out. And it is a pocket device and so can be used on the go.” The KNFB Reader costs Rs 55,000 and is supported only on the Nokia N-82, which means shelling out another Rs 20,000. The Xavier Resource Centre lets people try the device so that they can sample the magic for themselves.

Pranav Lal, meanwhile, has turned himself into something of a magician. After a few seconds of pointing the lens of his Nokia E-51 at his subject (while offering apologies for this rudeness) and listening to his earphones, he offers his comments.

“You have interesting hair,” he begins, “It is not flat. And you’ve bunched it up… some of it is falling over your shoulders.” Needless to say, his subject is left agape.

Pranav Lal is an information security consultant with Mahindra Special Services Group. He cannot see. But, somewhat like bats, he can visualise objects by listening to the ‘soundscapes’ set off by objects in front of the camera. This software is called vOICe and its promise is simple: ‘Seeing with sound’. It can be downloaded free onto a mobile phone or desktop. Pranav has a tutorial on his blog (techesoterica.wordpress.com) for beginners to learn how to see with sound. An excerpt: ‘The pitch represents the height of an object. So the higher the object, the higher the pitch of the sound. The volume represents the brightness of an object such that the brighter the object, the louder the sound will be… You can sense the curves of an object by the way the sound travels from the left side of your head to the right side.” It might sound like a jumble of sounds at first, but familiarity enriches the perception of shapes, sizes, texture and more.

Pranav Lal was introduced to vision technology in 2001. Since, he has sharpened his usage skills. This means he no longer needs to grope along the wall till he reaches the door or feel his way on a table to find his glass of water. With vOICe, he senses the spatial domain. It takes practice, of course. He began by looking at a straight line. “Now, I can look at a Rembrandt painting.”

Fifteen minute sessions for a month-and-a-half, and the user should be able to identify shapes, Pranav Lal says. He even trains people to Skype with sound. “Until just the other day,” he adds, “I didn’t know what a crescent-shaped moon looked like. And yesterday I looked at an omelette. When I am at a restaurant, I don’t have to wonder about the decor. In my car, I can look at the traffic from my window. A simple walk in a garden is full of interesting discoveries for me.”

Pranav Lal’s mobile phone has another cool utility, the Global Positioning System (GPS) loaded with Wayfinder Access that offers map coverage of India. While everyone can make good use of a GPS, access to a navigation systems has far greater practical implications for the visually challenged. It’s a life-saver, he says. “I have to travel a lot for work. And this gives me turn by turn directions. I can direct the taxi or the auto driver and it helps find my way back home. It is a great comfort to have. The other big advantage is that the GPS tells me about the restaurants, bars and shops in a particular neighbourhood. It tells me street names. For instance, I recently discovered that the street my house is on is called Uday Shankar Marg. No one else knows that.”