Revival of the Fittest

Bored with your morning jogs and routine aerobics? Check out the latest craze of fitness enthusiasts—ancient martial arts that have kicked in afresh 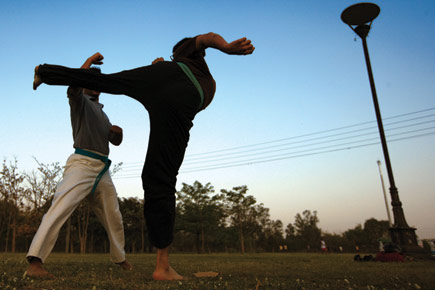 
A dozen people stand transfixed as Jothi Senthil Kannan executes breathtaking spins and spectacular twirls with a bamboo staff on a grassy knoll in Puducherry. Then with a piercing war cry, he takes a mighty leap, demonstrating the awesome power of silambam.

Once an integral part of every warrior clan’s training regime in southern India, this 5,000-year-old martial art lost out to the more popular and paying warrior arts like kalaripayattu and the Manipuri thang-ta. With few takers, silambam survived only on the fringes—in small villages and hamlets.

Fortunately, this dying art has made an impressive comeback as one of the new favourites of fitness enthusiasts. Tourists flocking the southern shores have embraced silambam as an ideal blend of meditation and disciplined workout— a perfect antidote to their stressful lives. “Today, silambam has become the preferred workout routine for foreigners and Indians alike. Such is the popularity that nearly 6,000 students join these classes every year,” says Jothi, who is also the president of the International Silambam and Kuthuvarisai Federation.

A healthy momentum is building up as ancient martial arts like silambam come as a fresh option to the ever-growing tribe of fitness enthusiasts who are weary of routine early morning jogs and hours of cardio training in the gym. To get that perfect chiselled physique, youngsters are now experimenting with unconventional forms of training that allow them to learn a new craft as well.

The fact that the Indian fitness industry is pegged at Rs 2,500 crore, growing at over 40 per cent annually, clearly shows that individuals don’t mind spending money on fitness routines that catch their fancy. The once-popular martial arts of taekwondo and judo are left behind on school playgrounds, as young professionals prefer the new generation of fitness workouts like the Israeli krav maga and the traditional Japanese shotokan and aikido.

Krav maga, the official hand-to-hand combat system of the Israeli defence forces, has been around in India for the past five years. “Each year the number of enthusiasts joining the batches keeps increasing. Besides teaching people how to take charge of their own protection, we impart a lot of mental training as well,” says Vicky Kapoor, head of the Indian chapter of the International Krav Maga Federation. Unlike other martial arts, krav maga is not rigid or ritualistic and hence a lot of fun. The motto is to feel strong, feel good and feel safe!

The workout involves cardio and endurance training for total body conditioning. Krav maga firms up and tones muscles right from the initial stages. In fact, one can burn up to 800 calories in an hour of training.
In a session organised by his company in Bangalore, Nallathambi Perumal K, 30, was asked to kick the punching bag. He lasted about 20 seconds. “I was shocked as I consider myself considerably fit. However, things improved dramatically as we put on some more hours of training. I was able to clock more than a minute of aggressive attacks on the punching bag from the third class onwards,” he says.

Aikido has a similar holistic body training where muscle groups are worked upon to improve tone, mass and power. “We emphasise the use of coordinated whole body movement and balance,” says Sensei Paritosh Kar, whose classes are very popular in South Delhi. Such wholesome benefits can’t be derived from taekwondo or judo where the emphasis is primarily on the legs and hands.

The beauty of these self-defence regimes lies in their minimalism—clean movements and simple techniques. Among all these regimes, shotokan karate is best known for its simplicity and effortlessness. This ancient form of Japanese karate focuses on the harmonious use of body and mind. Students are first tutored in patience, discipline and coordination before being taught the katas of kicks, punches, sweeps, strikes and throws. “It is not just a martial art form; rather it is a concept based on the philosophies of Bushido and Zen,” says Sensei Rajeev Sabharwal, who held the prestigious title of World Champion twice in his career. Such spiritual and emotional aspects of training help students overcome stress and depression in their daily lives.

Silambam too works on the premise that the power lies in the mind and that it plays a key role in giving direction to the best possible moves. “In the final stage of silambam training, that we call varma kalai, we teach kundalini yoga. We train students about energy flows in the human body,” says Mahesh Kumar, honorary secretary general of Indian Silambam Federation. As part of the process, the student has to control his temper. A silambam expert can perform high-speed actions—up to speeds of 100 kmph. To be that swift, one must be calm and controlled, and that skill comes from sound emotional balance.

It is this spiritual connect that is attracting hordes of foreigners from across the world to silambam. Jothi teaches this warrior craft in 110 countries. “Foreigners also come to my classes in Puducherry to learn this art. France, Germany, Belgium, Canada, Sri Lanka, Malaysia, Austria, USA, UK, Iran and Australia are just some of the countries that my students hail from,” he says.

Practical applications of these martial art forms in real life give them an edge over other fitness regimes. Thirty-year-old Abhinav Mishra joined krav maga classes for this very reason. “As an ex-army officer, I needed something which was practical and more street friendly. I visited their website and realised that krav maga was the most effective in development of reflexes. It also sounded like a fun fitness regime,” says Abhinav, who has been learning the self-defence form for the past one year.

Six-year-old kids or 60-year-old senior citizens, everyone seems to be fascinated with these fitness regimes. While Sabharwal mostly teaches 21-22-year-old software engineers in his Gurgaon classes, Kar gets an eclectic mix of lawyers, professors, architects and engineers at his Greater Kailash-I classes. The belief that these sessions help raise confidence and concentration levels, besides improving physical well-being, is what attracts professionals to these courses.

Take the case of Mohsin Zaidi, who used to walk with a stoop. After joining shotokan classes, he began to feel more confident and started to walk straight. Similarly, Dhivagar Palanisamy began to feel much more at ease in social gatherings after joining silambam classes in Bangalore. “Initially, when people used to tell me that martial arts can boost your confidence levels, I used to laugh at them. But now I can see the benefits for myself. Also, learning a new craft always makes one happy,” says this 27-year-old executive with Honeywell.

These courses are open to everyone. All that is needed is an open mind and a willingness to learn. If you pursue the path with patience and tolerance, you will soon feel the energy of these ancient martial arts coursing through your veins.

The power will truly be yours!