Return of the LP

Decades after we banished LPs, collectors and newbies confess that vinyl is spinning its way back into their lives as audio-grade discs re-mastered to sound better. 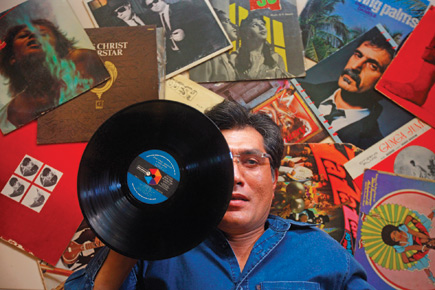 Decades after we banished LPs, collectors and newbies confess that vinyl is spinning its way back into their lives as audio-grade discs re-mastered to sound better.


In his second floor apartment in Bombay, close to the Mount Mary Church, Denzil Smith puts the needle on a record. The stylus rides the blank grooves for a few seconds till the trumpets break in and a stomping jazz score fills the living room, blithely floating out of the open windows. The swinging music transports you into Louis Armstrong land until… a Dixie Lady croons in Hindi. “Can you believe this is Asha Bhosle singing Nazar Uthake in 1959’s Chacha Zindabad?” asks Denzil in his deep baritone. Between crashing drum cymbals and a sitar crescendo, he pulls out LP after LP, showing how Goan musicians filled Hindi films with hot jazz and the cha-cha-cha, decades before RD Burman burst in with his Dhan-te-nan.

A theatre and film actor, Denzil talks like a vinyl-hunter nowadays. This is after he’s crashed into the global comeback of LPs while researching Jazz, a play about Bollywood’s Goan music legacy. In Amsterdam’s Tropisch Centre, “I tracked an Enoc Daniel disc, a Jewish Jazz pianist-accordionist who played in Hindi movies.” He stalked Zurich’s street markets for Jean Luc Ponty’s Cosmic Messenger. In Mumbai’s Chor Bazaar, when he saw a Mehli Mehta LP poking out of a stack, he pounced on it.

These treasures are clubbed with his father’s 100 odd LPs, but the old Grundig has been replaced by a Bang & Olufsen turntable. As the music blares, you ask, do the neighbours complain? “No, no, this is Bandra,” laughs Denzil now playing the Aakhri Khat soundtrack, featuring trumpeter Chic Chocolate, India’s own Louis Armstrong.

Almost two decades after we banished black vinyl, replacing it with silver CDs and digital iTunes that we can pluck out of cyberspace and play from our pockets, LPs are spinning back into our lives. “Anyone with a good pair of ears and something between them can recognise vinyl’s audio superiority,” declares Mahendra Dave, co-founder of Cadence, a speaker-line loved by audiophiles that also sells in Europe.

Analogue has always had believers in its warm acoustics. Now, there are new converts too. “It’s not just nostalgia. There are distinct buyer profiles, old collectors and newbies who want to get into vinyl,” says Sushil Anand, who imports ProJect turntables. Feeding this niche, Anand’s Nova Audio stocks 17 models that cost between Rs 18,000 and Rs 3 lakh.

The music industry is tuning in. After their last LP release in 1997, Dil To Pagal Hai, Saregama’s all set to re-enter Indian stores in September with the first AR Rahman record, Jhoota Hi Sahi. They’re also releasing, Hum Dono, the Dev Anand classic. The film’s been colourised and “the new LP has enhanced audio”, says Atul Churamani, vice-president of Saregama. This comes after three international launches, including the funkalicious Ten Ragas to a Disco Beat by RD Burman’s guitarist Charanjit Singh. With a treasury of 4,000 Hindi film masters, Churamani says, “We’re wondering whether to press the classics like Mughal-e-Azam and Amar Prem or compilations.”

EMI India has imported 150 titles from their international catalogue. “We’re taking a mix of classic Floyd and Beatles along with current favourites like Norah Jones and Radiohead,” says EMI’s Anand Srinivasan.

“My kids were intrigued. This is the first time they’re seeing music visually and mechanically,” says T Jimmy, an audiophile in Bombay. In 2008, at Munich’s High End audio show, one turntable demo convinced Jimmy it was time to return to vinyl. Nowadays, Jimmy’s young sons watch goggle-eyed as dad slides LPs out of their dust jacket and carefully sets the diamond-tipped stylus onto the edge of rotating discs. His high-end CD player is relegated to “warming up the system” as he rifles through 1,000 LPs to transport him to acoustic nirvana.

“The fatigue factor is absent in vinyl,” says Jimmy, “because often a lot of artificial details get cooked into a CD.” But there’s huge effort involved: sensitive styluses get jammed by dust, so this

collector has a specialised vacuum cleaner to keep discs immaculate. “It’s a pain, but there’s charm in caring for your records,” he says.

While the audio-fickle flirted with MP3, iTunes and burning CDs, “Manufacturers kept improving turntables—in the last 20 years they’ve gone into high-engineering overkill,” says Khushrau Jilla, an audio distributor. He did listen to CDs, but never an iPod: “Too digital, too distant, and too removed.”

There’s also a sonic leap you can hear in new LPs. Led Zeppelin’s Mothership has been re-mastered by the original band members Robert Plant, Jimmy Page and John Paul Jones. These audio-grade discs also weigh more, at 180-240 gm, compared to the earlier 120-150 gm.

Classic rock rules. At music stores in Bombay, Chennai and Kochi, the fastest flying discs are Pink Floyd’s The Dark Side of the Moon, The Eagles’ Hotel California and The Beatles’ 1, a compilation of their number ones. Sony’s new ten titles include Michael Jackson’s Thriller “which will be a bestseller”, predicts Curmally.

This is decades after Rhythm House ripped out their listening booths, the only air-conditioned section in the entire store. Vinyl-lovers used to get cosy here till there was a discreet knock from the next person waiting with an armful of LPs. “We can’t afford the space for that kind of listening,” regrets Curmally.

“CDs are mass produced with no scope of being an artistic canvas,” says Jimmy. Jethro Tull’s new Aqualung resembles an oil artwork. Beyond black, re-issued vinyl also slides out in rainbow hues. The Cocteau Twins disc is purple, Falco’s is red, and The Alan Parsons Project (Eye in the Sky) is a mesmerising green.

For Denzil, records are something to have and hold onto. And, when Chic Chocolate blows the trumpet, “it triggers a flood of memories, where I see orchestras and an era of grace”. They’ve also spun out hidden history. Anthony Gonsalves, who clambered out of a cake in the film Amar Akbar Anthony, was actually the name of a violinist who taught Laxmikant Pyarelal music.

This was the first celluloid tribute to a Goan maestro in a Hindi movie. It is things like this that make Denzil clutch vintage vinyl to his chest.