A man who played politics by frequently staging his own suicide and lived to tell the tale. 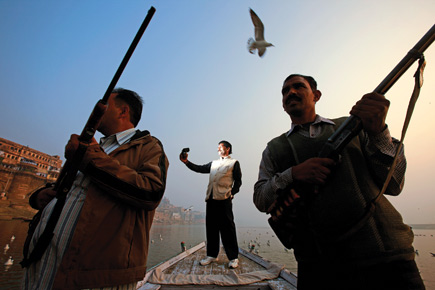 A man who played politics by frequently staging his own suicide and lived to tell the tale.


Thirty four-year-old Arun Pathak is a believer in the power of suicide. Suicide attempts, to be precise. According to him, it is one of the most effective ways to get people to listen and act upon your demands. Pathak has tried to commit suicide at least five times “for the larger good of the society”. All five times he was saved by his supporters.

His various attempts in Varanasi may not have won him a place in the record books, but they have certainly got him fame. He says that had it not been for his dramatic suicide attempts he would have still been an unknown man living in a tiny room on the second floor of a nondescript Jain dharamshala at Assi Ghat in Varanasi. Over the years, he has cut his veins, swallowed Valium, tried to immolate himself and has jumped into the Ganga with a stone tied to his body.

His arms and legs are scarred from self-inflicted wounds and police beatings. There is a nasty gash that runs across his left forearm. On this hand is a finger he can no longer straighten as it was damaged in a police beating.

Since his first suicide attempt in 1994, when he cut himself with “a blade”, Pathak has become a rich man. He moved out of the ghettos of Assi Ghat and is now a politician with the Bahujan Samaj Party (BSP). “I am my party’s co-ordinator for the Rohanya Assembly segment. When I wanted to do some constructive nation building activities I had approached every political party including the Congress, BJP and the Samajwadi Party. But only the BSP recognised my worth and accorded me respect,” says Pathak, flicking through pages of a voluminous album which has photographs of him. He holds out photographs and firmly urges one to take a look at his political career after his life as a suicide attempter.

A Brahmin by birth, he confesses that he was prone to violence since he was 10 years old. As a child, Pathak, who hails from an impoverished family, worked at the local provision store for Rs 7.50 a month. He bargained with his master and managed to increase his salary to Rs 30.

One day he was robbed on his way home. “They were the local goondas and I was powerless. But since that day I fantasised about killing them. The mohalla musclemen kept thinking I was weak and kept harassing me and my family,” says Pathak. When he was told by a friend that Bal Thackeray’s Shiv Sena was recruiting youths and would give a Mauser pistol to its members, he joined that party.

As a Sainik he became a rabble rouser, and his name started cropping up in newspapers. His first major assignment was to offer prayers at the Shringar Gauri temple in Ayodhya in 1994. But the temple administration refused to let Pathak do it. Surrounded by his friends, Pathak shouted slogans and cut himself with a blade . “I was admitted to a local hospital and needed 28 stitches,” says Pathak.

On 5 December 1998, he swallowed 50 Valium tablets of 10 mg each to protest against the high-handedness of PK Singh, a police officer who did not allow Pathak to put up saffron flags to commemorate the anniversary of the demolition of Babri Masjid. Once again he was hospitalised. On his recovery, seeing that his previous attempt made no impact, he swallowed another batch of Valium.
His love for the Shiv Sena ended a few years ago when he saw images of Sainiks beating up North Indians in Maharashtra. He left the Sena to set up his own Kranti Sena. Back when Deepa Mehta was shooting Water at the ghats in Varanasi, it generated a lot of heat in the town. Pathak found a line in the film (‘Narayan, don’t you know that if a Brahmin or God sleeps with a woman she is blessed’) offensive. He demanded that Mehta drop the line, but when that did not happen, Pathak announced that he would not allow the film to be shot in Varanasi.

Accompanied by friends, he took a boat ride to the centre of the Ganga, close to where the film was being shot. He tied a stone to his body and jumped into the river, but not before handing over his watch to a friend. (Since he had intimated the press, the event received wide coverage.) Within minutes his friends dived into the water and brought him out. He was rushed to the hospital and he survived another attempt.

In 1997, he started a campaign to shut down alcohol shops in Varanasi and five other holy places. When the administration did not pay heed, Pathak doused himself with petrol and climbed atop a 300-foot tall water tank in Sigra. Watched by his band of loyalists, police and onlookers he threatened to jump if the order was not withdrawn. “I stayed up for five hours. I got a written assurance from the administration and climbed down the tank, and ran away. I knew that if I was caught, the police would thrash me. I went underground for a couple of days.”

Somewhere down the line, Pathak says that he realised his political stunts were useless. “These politicians just use people like me. I have multiple cases against me registered at various police stations. I am also fighting various court cases. I did all I did for the people. Today I am spending my own money for lawyers. Neither Thackeray nor anyone else is helping me.”

From a hardcore Muslim hater he has now become their “friend” and even observes the month-long roza fasting season of Ramazan. He regrets trying to harm the community once and has promised to keep them safe. These days he goes around accompanied by a group of rifle-bearing bodyguards and “loyalists”. He does not want to put his life on the line any more.