Oral contraception once spelt sexual liberation in the West, population control in India. But in Kerala’s tribal belt of Idukki, it has played havoc with women’s lives 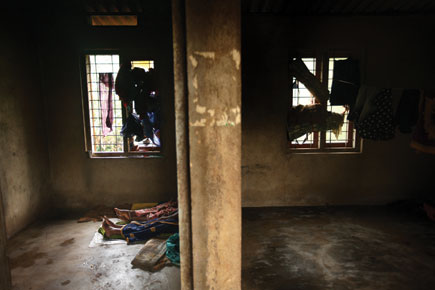 Oral contraception once spelt sexual liberation in the West, population control in India. But in Kerala’s tribal belt of Idukki, it has played havoc with women’s lives


IDUKKI, KERALA ~ Since puberty, Dhanalakshmi has been popping pills, round and white little pills, of which she knows nothing apart from their purpose—to retain ‘purity’. The pills help her stave off the five days of ‘impurity’ that nature besets her with every month. It was the wisdom of her mother, Azhakamma, that first put her onto the pill regime. Today, Dhanalakshmi is 24, and she too is painfully aware of what impurity implies. If ‘it’ happens, she cannot stay at home. Rather than have anyone or anything suffer the accidental taint of her menses, she must isolate herself away from home with other menstruating women in Valaymapura, a gloomy little outpost on the outskirts of the settlement.

It’s almost as bad as being in prison, even if only for a few days. Valaymapura is decrepit and untidy, lacks water and other basic facilities, and the food there is awful. It’s a nightmare, and women appear thankful to Family Planning for giving them a way to fend it off as long as they can. State-distributed pills of the contraceptive Mala-D, they discovered many years ago, postpones menstruation. Even indefinitely, if taken regularly in large enough dosages.

For Dhanalakshmi, a member of the Muthuvan tribe of forest-dwellers, being forced into isolation would be all the more unbearable. She cannot move or walk without help, as one side of her body is paralysed. Three years ago, she had a stroke that left her this way. “She had a stroke due to the excessive intake of Mala-D, and doctors at Kottayam Medical College vouch for it,” says Bindu George, a coordinator of Mahila Samakhya, a women’s welfare organisation.

That was not the first truly tragic turn of Dhanalakshmi’s life. In fact, her disability can directly be traced to a hellish conjugal life. Married at 14, only a year after her mother put her on the pill to delay her periods, she suspended the regime long enough to have a baby boy the following year. But her husband, a ruthless drunk, would beat her black and blue every day. He was so violent that Azhakamma thought it best that Dhanalakshmi never conceives again. To be double sure, she put her daughter on two Mala-D pills daily. This, says Bindu, is twice the typical dose taken by Idukki’s tribal women, who are socially conditioned to use these pills the moment they attain puberty.

Pregnancy preventive pills, dispensed freely for years as a measure to keep birth rates down and the country’s morale up, has claimed many more lives—literally and figuratively—in Idukki, the district with the second largest tribal population in Kerala, than you can imagine.

Muthuvans, indigenous to Idukkii, are considered among the most backward of tribals. They live deep in forest areas, dependent on forest produce and agriculture for sustenance. Their literacy rate is poor; their children rarely go to school, as this means a jungle walk of 15 km at least to reach the closest such. “They are generally very conservative, highly adherent to customs and traditions,” observes Seema Bhaskar, state director of Mahila Samakhya, who has extensively studied the impact of contraception pill intake among tribal women, “They firmly believe that women are ‘impure’ during menstruation, making it compulsory for women to stay apart during their periods. If they don’t, it is believed that they will suffer the curse of a goddess.”

Bhagavatiyamma, a Muthuvan resident of Mankulam Panchayat, explains the perils of being cursed by a mountain goddess for violating the menstrual tradition. “We will be attacked by wild animals,” she says, “We will get no more rain, and the crops will be badly hit.” And in her scheme of things, there’s nothing worse than having the entire tribe bear the brunt of divine wrath. To avoid this eventuality as much as her own periodic exile, she herself had taken Mala-D for more than a decade until menopause came to her relief. “Now I am 50 and ‘it’ has stopped,” she says, as if a burden has been lifted off her frail body.

Azhakamma, who is only 40, still awaits her chance to quit the pills for good. If she is forced into isolation, she fears, there would be no one at home to look after her half-paralysed daughter—who she dutifully keeps plying with pills as well. “Dhanalakshmi needs help for everything,” the mother reasons, “How can she stay in Valaymapura all alone?” She suspects—even agrees—that frequent pill popping is not good for health, but says she is helpless. She has no other option.

Chenthamara, a 35-year-old mother of one, affirms that Muthuvan men insist on women observing the custom: “If we do not move out on ‘impure days’, our men beat us up.” She too has been taking the pills for the past 15 years, though she has had two abortions.

“Habitual abortion is another serious health problem common among Muthuvan women,” says Swapna, a field worker of Mahila Samakhya, which recently conducted a reproductive health survey among the area’s tribals. The results were alarming. Seema Bhaskar, her senior colleague, cites some of the details: “We surveyed 84 hamlets in Adimali and Devikulam blocks. Of the 3,008 women we interviewed, 42 per cent of them disclosed that they’d been using Mala-D every day to [put off] their menses, while 62 per cent were pretty aware of its side effects.” Levels of infertility were also found to be quite high; nearly a third of those surveyed had only one or two children, and not because they wanted no more. Around 100 women did not have any children at all. The finding that particularly bothered Bhaskar was “that 88 per cent of women strictly believed in observing traditions related to menstruation”.

The local authorities, on their part, say there is little they can do about what people believe. Respite must be offered in other ways. “It is not practical to intervene in their culture and traditions,” says Dr MC Induchoodan, divisional forest officer, Munnar, “So we have tried to provide women better facilities to stay away from their homes on menstrual days.” In Mankulam Panchayat, the Forest Department has built Valaymapura quarters for five Muthuvan settlements. “These are good, spacious houses, clean and safe. Along with Mahila Samakhya workers, we have tried to persuade them to stay in these houses instead of consuming tablets to hold off menstruation.” The programme is soon to be expanded to cover all Muthuvan settlements in Idukki, he adds, with funds from the ‘community benefit’ component of the National Afforestation Programme.

According to Bindu, who has been working among Muthuvans for over a decade, the Department’s idea has some merit. “There is indeed a positive change in the settlements where it built these hamlets. The women now show a readiness to stop their intake of pills, but I must say, the change is very slow.” Most women have ritualised the intake.

Besides, there are other factors that make these women reluctant to use the Department’s facilities. Most of them are located in areas that are not isolated enough; women living here are much too likely to come across men, which would defeat the point of the exercise. Contraceptive pills, many women reckon, offers better protection against the unwanted rage of menfolk who invoke the presumed fury of a deity.

“The oral pill is the least recommended method of contraception,” says Dr Kunjamma Roy, professor and head of the Department of Obstetrics & Gynecology at Kottayam’s Government Medical College. “It is true that in the early stages of the family planning programme, the Government had promoted oral pills. Mala-D and other pills were distributed free of cost. But it was later found that the regular intake of Mala-D causes serious health hazards.”

Physiologically, the pill simulates the ovulation cycle to suppress the release of ova. This causes such side effects as acne, breast tenderness, bloating, nausea and mood changes. “The formation of blood clots in the leg or other parts of the body is the most serious side effect,” adds Dr Roy, “which could even result in a heart attack or stroke.”

In Mankulam Panchayat alone, Mahila Samakhya workers have been witness to six stroke-related deaths over the past four years or so. “There is nobody to take care of a woman if she is bed-ridden,” says Bindu, “and stroke-

afflicted women die of other diseases due to negligence and lack of nursing.” Thani, a 32-year-old who suffered paralysis and was bed-ridden for a few months, died in December 2009 due to diarrhoea and fever. The latest reported case is the demise of 50-year-old Valarmathi, who had been taking pills for over a decade and suffered a stroke in May.

What worsens the crisis is that Muthuvans seldom go to hospitals, their being so remote. The taluk hospital of Adimali, for example, is 30 km from the closest Muthuvan settlement. Even the primary health centre is way too far. To obtain Mala-D supplies, however, many tribals are ready to travel as far as 20 km to reach chemists in Munnar that sell a strip of 30 for about Rs 15. Till not long ago, the pills were easily available at Mankulam Panchayat’s shops. “Pressure mounted by awareness campaigns has reduced the availability of these pills in the locality,” says Bindu, “but tribal women now go to nearby towns to buy them.”

Thankfully, Idukki’s other tribal womenfolk are not as voracious as Muthuvans in their pill intake, largely because menstruation does not always wreak the same torment on them. Among Mannan tribals, for instance, all that women are required to do is restrict their movements within their homes.

With awareness of the problem beginning to spread, thanks to the efforts of social workers, tribal women are also turning reluctant to admit their use of these pills. Asked, many say that they use them only when they need to go to the local temple or get jobs under the National Rural Employment Guarantee Scheme. Stopping their periods and thus staying ‘clean’ in all public activity, evidently, remains a pressing concern even for the better aware.

That India’s Family Planning Programme, introduced by the Government in the early 1950s and later renamed Family Welfare Programme, would lead to such monstrous menstrual manipulation is something not everybody has come to terms with. Kerala, after all, was hailed as Family Planning’s biggest success. By the statistics, the state achieved the biggest reduction in fertility rates among all Indian states. No wonder, between 1951 and 1991, Kerala’s annualised rate of population growth fell from 2.08 to 1.31 per cent, while the all-India rate rose from 1.25 to 2.11 per cent. Early results of the 2011 Census indicate that Kerala’s rate has slid to under 0.5 per cent over the past decade. The Centre’s ‘two child’ norm has actually become a social standard in the state, cutting across all religious and community distinctions. The average gap between pregnancies has also widened, which has resulted in remarkably reduced maternal and infant mortality rates.

Pills, remember, were heavily promoted in the early phases of the Programme; usage was voluntary, but they were almost pushed down throats by State propaganda in a frantic effort to contain birth rates seen spiralling out of control in an era of population paranoia. The legacy of this development paradigm has been the widespread availability and usage of a chemical concoction that plays havoc with women’s lives till this day.