For the first time in human history, more people live in urban spaces than in rural. But confronted by ecological and other civic challenges, our cities will have to adapt dramatically. What might they look like in time to come? 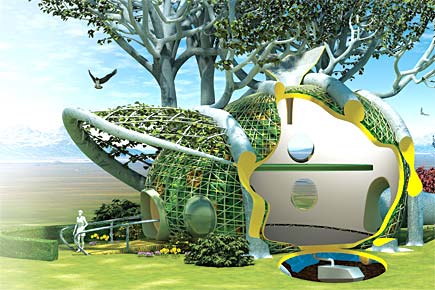 For the first time in history, more people live in urban spaces than in rural. Our cities will have to adapt dramatically. What might they look like in time to come?


A couple of weeks ago in New York, General Motors unveiled a jelly beanshaped, two-passenger electric car with Internet access and GPS network that would allow it to avoid potholes, find parking and drive by itself. Slated for a 2012 release, the Personal Urban Mobility and Accessibility vehicle (Puma), conjures a space age, Jetsons-inspired future, much like some of the ideas at a recent meet at Harvard University’s Graduate School of Design (GSD).

A constellation of architects, designers and other academics met in Cambridge to discuss ‘Ecological Urbanism’. Combine Al Gore’s An Inconvenient Truth—the idea that climate change is such a threat that responding aggressively is a moral imperative—with the fact that for the first time in history most of humanity lives in cities, and the urgency to create places where people can live sustainably in close proximity is clear.

US President Barack Obama is on the ball. In February, he created the White House Office of Urban Affairs, and set about staffing it with urban planners, to complement what many call his ‘green dream team’. This, combined with nearly $50 billion in infrastructure spending in the recent stimulus package, has raised the hopes of architects, environmentalists and urban planners.

This means city dwellers emit nearly four times as much as their rural counterparts (the UN estimates humanity became more urban than rural in 2008; right now, global populations of urban and rural folk are roughly the same). Put another way, living in a city is almost four times as bad for the environment as living outside of one.

Thankfully, the figure turns out to be wildly inaccurate.

The carbon footprint of urban dwellers is relatively light, says a report by David Dodman in the April issue of Environment and Urbanization. Dodman, a researcher at the International Institute for Environment and Development (IIED), studied reports from cities in Asia, North and Latin America and Europe. He found New Yorkers emit a third less greenhouse gases than the average American and Barcelonans, and Londoners emit about half their national averages. Urban Brazilians are convincingly green: the residents of Sao Paolo and Rio de Janeiro, according to Dodman, are responsible for only one-third the national emissions average.

Dodman’s paper complements an October 2008 study by IIED Senior Fellow David Satterthwaite, who found cities emit about 40 per cent of all greenhouse gases, as opposed to the oftcited 80 per cent. On average, then, people who live in small towns and rural areas emit 50 per cent more greenhouse gases than city folk.

But that doesn’t mean the efforts of Bloomberg and Obama are misplaced. On the contrary: by 2050, some 70 per cent of us will live in urban settings, says the UN. And it will ultimately be well managed urban environments, with smart, energy-efficient buildings, power systems, transport and planning, that will save us from ourselves.

Yet, the right approach is elusive. For centuries, there have been two dominant perspectives on cities: as natural as an anthill, or part of an ongoing clash between man and nature. Pritzkerwinning architect and Harvard Professor Rem Koolhaas believes that in recent decades, globalisation and climate change have widened that divide, and architects have failed to respond.

“The sum total of architectural knowledge hasn’t gone beyond this competition,” he said during his keynote address at the Harvard conference. “The argument is still between this building and this building – it’s not deep enough.”

Mitchell Joachim, who teaches architecture and design at Columbia University, might beg to differ. He was recently selected by Wired magazine as one of 15 people Obama should listen to. Last year, he co-founded Terreform, a Brooklyn-based non-profit that focuses on “solving the problems that man has created”.

Joachim presented his collapsible and stackable City Car, which would hang at public recharge stations, available for shared use. Still in development, the idea won Time magazine’s best invention of 2007. Joachim also explained Fab Tree Hab, a living house-tree, grown on site and shaped by reusable scaffolds; the idea has been exhibited at New York’s Museum of Modern Art.

But he brought down the house with “meat tectonics”. Aiming to use meat proteins developed in a lab as building material, Joachim showed a computerised rendering of an armadillo-shaped, kidney-colored home. “It’s very ugly, we know,” said Joachim to a burst of laughter. “We’re not sure what a meat house is supposed to look like.”

Joachim insists he’s realistic. “While it’s certainly meant to be provocative, nothing that I was showing was pie-in-the-sky,” he adds.

Most speakers envisioned less lofty boundaries. Ed Glaeser, Harvard economics professor and a columnist with the Boston Globe, used a misadventure of Henry David Thoreau to make his point. The American naturalist and philosopher, who famously moved to the rural idyll of Walden Pond “to live deliberately”, accidentally burned over a hundred acres of pristine Massachusetts woodlands in 1844. “Don’t be like Thoreau,” said Glaeser. “If we want to do good to our green spaces, we have to stay away from them.”

He was echoing not only the recent IIED findings, but also the ideas of urban expert Jane Jacobs. Decades ago, she advocated greater urban density, as in New York’s Greenwich Village, and dubbed as “science-fiction nonsense” the idea that parks were the lungs of the city. “It takes about three acres of wood to absorb as much carbon dioxide as four people exude in breathing, cooking and heating,” she wrote in her landmark 1961 book The Death and Life of Great American Cities. “It is no accident that we Americans, probably the world’s champion sentimentalisers about nature, are at one and the same time probably the world’s most voracious and disrespectful destroyers of [the] wild and rural countryside.”

Cities are expanding further into the countryside while downtown hubs rely on regional agricultural production. The linkages between urban and rural areas are strengthening and the divide is less clear. Dorothee Imbert, associate professor in landscape architecture at Harvard GSD, says: “We tend to operate in territories that are far too small. We need to start thinking about our relationship to places, not boundaries.”

Thinking along those lines, Koolhaas’ Office for Metropolitan Architecture has come up with Zeekracht (sea power in Dutch), a plan for oceanic wind farms across the North Sea that would help ensure Europe’s energy independence by 2025. With its constant high winds, shallow waters and advanced renewable industries, Koolhaas believes the North Sea offers energy potential approaching that of Persian Gulf oil. The plan includes production belts in a half dozen urban centres on or near the sea, along with energy research centres, manufacturing cooperation and clean tech innovation. “It’s a great model for how to start thinking about this,” says Yale architecture Professor Michelle Addington.

But is it, really? Zeekracht may be a fine project, but it tells us little about how to live sustainably in urban settings. Few cities sit next to great, windswept expanses of water, or a near-constant supply of sun—as with Lord Norman Foster’s $22 billion Masdar City, a zero-emission, solar power-reliant development near Abu Dhabi. Toshiko Mori, former chair of Harvard’s architecture department, called it “a scary vision”.

Another concern is food. Within 20 years, for example, Toronto will be unable to feed itself, says Nina-Marie Lister, associate professor of urban and regional planning at Toronto’s Ryerson University. For megacities like Delhi, Sao Paolo and Lagos, this is already a growing problem. A Western response is urban farming, with major efforts in Chicago, New York, and a handful of other American and European cities. Imbert points to her own student-assisted organic farms in nearby Allston, yet acknowledges that adequate food supply for future cities “would require rethinking of landscape in the building process”.

This goes down well with Herbert Dreiseitl. He designs landscape and water management projects, primarily in urban areas, and stresses cooperation. “Everybody has their own responsibilities, their own budget and they don’t talk to each other—it’s totally stupid,” he says. “We have to
interact, integrate, get over our borders.”

Boston Mayor Thomas M Menino has spoken of the need to “take a more comprehensive look at how we build a 21st century city”. According to Nancy Krieger, a Harvard professor of society and health, “We need to move away from Masters-of-the-Universe planning, which really doesn’t seem to be working out too well”. Joachim, too, sees integration as essential.

No one disputes that urbanism cuts across disciplines, but Joachim’s bold visions and GM’s Puma suggest green design is way out in front, addressing real problems with serious yet imaginative tinkering, while urban planners, architects, food and energy specialists and policymakers lag behind. These various players need to work in concert to build and reshape our cities.

Most architects, designers and planners communicate better with images than words. In Boston, they presented their ideas in colourful slides projected on a white wall. That most of the conference took place in the dark offered an easy metaphor: when it comes to ecological urbanism, we’re just beginning to see the light.