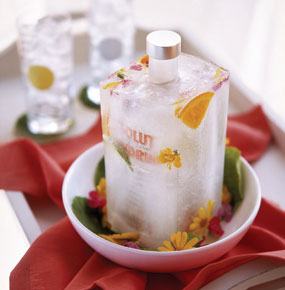 Remember the day high art was trash-borne? Warholian graffiti of Madonna on soup cans? Well, you could think of vodka the same way: as postmodernism bottled. Unlike whisky and brandy, which require shamans and blenders calling for elaborate rituals to concoct the drink, vodka, made from humble things like potatoes, sugar beet molasses and grain—virtually anything with starch or sugar—screams of modesty. Visit a place where it is made, and you get what you see. There are no gothic trapdoors, no dark and brooding cellars, no flights of steps inside to complicate the narrative. It dispels the very miasma of mysticism, hoary times and creation myths that shroud other drinks.

In the past, all they had to do was toss some yeast into mashed grain or fruit, ferment it, distill it, strain it and drink it. Period. As cool as making instant coffee. But this very lucidity, ease and playfulness of vodka became its bane as well. Imagine the predicament. Vodka offers no tale of sitting inside subterranean barrels conversing with wood as it leeched from the timber precious elements that would have made it brooding dark. It’s crystal clear. And here’s another handicap. Every time you distil the potion to filter out impurities, it moves one step closer to that universal taste of ethyl alcohol.

See the catch? How does a distiller claim his brand of vodka is notches ahead of the rest when they all tend to taste and look the same once they’re refined?

The Soviet Union and Poland have long vied with each other to claim fatherhood of vodka. Still, if we dig deep for its country of origin, we find shifty postmodern terrain, where the truth can never be ascertained for sure. In ancient times, wherever grain was abundant, especially in places like Western Russia, Belarus, Lithuania, Ukraine and Poland (later called the ‘vodka belt’), it was pressed into service to make a potent drink. Russia, where the church wanted to save souls from vodka, has always been at the forefront of efforts to curb its consumption. But you can’t miss the irony when you learn that it was 15th century Russian monks who plodded all the way to Italian monasteries to pick up the art of making that strange drink. Until then, they didn’t know that their favourite wine could further be cut to the bone, abridged and distilled. And little did they know as they sashayed home with their new knowledge that it would soon inundate the country, and in future their followers in cassocks would wage pitched battles to exorcise the devil brewing in their vats.

Russia’s tryst with alcohol had begun long before vodka, when Vladimir I, the prince of Kiev, heard out various arguments for Judaism, Islam and Christianity in the 10th century. Jews had no land, Islam said ‘nay’ to alcohol, and the pagan ruler Vladimir now had every reason to ride his country straight into the folds of the Eastern Orthodox faith. “Drinking is the joy of the Russ,” he declared. Once it took hold, it drove men in hordes to the taverns, those churches for the secular sprouting all across Russia. In time, it would fill coffers with money, wage wars, sway politics and public opinion, and begin living a life of its own. So powerful did it get, it saw emperors pamper it to fill their exchequer with vodka taxes.

Rulers from Ivan the Great to Joseph Stalin knew the potential of the drink and played along. Ivan established the state monopoly on vodka and never had to look back in waging wars with his opponents. Peter the Great wanted precious information from foreigners as well as his fellow men from vodka parties he threw regularly, and vodka delivered more than he asked. In 1786, Catherine the Great, though a teetotaller herself, ended the state interference in vodka, thus helping improve its quality. Proud of this, she sent bottles of it to her correspondents all across Europe, including Voltaire. Asked whether she was apprehensive about the philosopher’s acerbic tongue and what he’d think of the drink, she replied he’d swallow his tongue in surprise, delight or envy of Russia. Stalin, as he assumed power, asked: “What is better, the yoke of foreign capital or the sale of vodka?” With the answer pillion-riding with the question, few bothered to answer (or object).

Vodka has survived much oppression. When Tsar Nicholas II curtailed its free flow, villages turned gloomy: weddings lost attendance, godfathers became scarce for baptisms, and funerals were difficult to arrange. That the banned drink was freely available in fancy restaurants set the stage for a class war. When the Tsar was executed after the communist revolution, a British member of parliament quipped: “It is perfectly clear what happens if you interfere with the deep-seated social habits of a people. The Tsar thought he had dethroned vodka and vodka soon dethroned the Tsar.”

Vladimir Lenin and Michael Gorbachev too tried in vain to free the country of the drink. But away from the eyes of secret police, it continued to swell in the countryside through moonshines and samogons. Even at the start of the 20th century, though vodka had flooded that part of Europe, it was still unheard of in other parts of the world. It was a rude drink, too brazen, and it could not boast of age or a long hibernation in wooden barrels. Vodka awaited a miracle that would catapult it to new markets, especially across the Atlantic.

When US prohibition ended in 1933, Jack Moran, owner of Cock n’ Bull tavern, had an abundance of ginger beer he didn’t know what to do with. One day, Rudolph Kunnet, a Russian émigré friend, visited him and confided similar worries, but with a different product. The latter had unwisely bought the rights to the label ‘Smirnoff’, a favourite vodka of Russia’s Tsarist court, as the drink hadn’t found favour with the US palate. After their chat, Moran and Kunnet wondered what would happen if they mixed ginger beer and vodka, tossed in some ice and sprinkled lime.

The above is the story of the legendary birth of Moscow Mule. Vodka finally crossed the Atlantic riding piggyback on this cocktail that soon became a rage in the US. As in spiritual enlightenment, its weakness—lack of colour, distinctive flavour and character—was in fact its strength. Such clarity is blessing, for anything can be done with it. Sip it and hold it in your mouth. It’s like water that burns a bit, still forming a tableau on the tongue, you’d notice, calm and composed since there’s no major tussle among ingredients for our attention (as in the case of whisky and brandy). It is perfect for cocktails.

Attempts to weave vodka with textures go back to the 15th century. Fruits, spices, herbs and berries were used in experiments. The drink tasted vicious in those dark days, its making crude and the water bad. But by the 16th century, Poland alone offered around 72 different herbal vodkas.

Cut to modern times. Plain vodka today is considered a postmodern drink. Being neutral, it doesn’t say anything on its own, but cleverly shifts the onus squarely on to distillers to express themselves by focusing on packaging, branding and projecting fantasies. The drinker, of course, joins the game, falling for a methodically constructed truth that a brand projects for itself, and, with or without knowing it, satisfying his self image by picking it over the other. Vodka is a spectacle primed for the eye. If the bottle looks sophisticated, so must its imbiber be. If the shape is avant-garde, so must its customer be. If it has an eco-friendly vibe, its drinker must have green ideals. And there is a cacophony of brand messages out there. Bottles in the shape of mammoth tusks, fire extinguishers, grenades, Easter eggs abound. From Kalashnikov vodka from Russia, with its distinct shape, to Pravda vodka, which comes adorned with a tanzanite jewel that’s often gouged out for earrings, vodka packaging has to be seen to be believed. There are bulletproof bottles gilded with gold, contents claimed to be purified with pure diamonds, labels that promise drinkers a ticket to an elite club of environment protectors.

Sex has always been a stomping ground for vodka. While the bottle of Sexy Tina Milky, which offers doses of vodka and Irish cream via a single ladle, is shaped like a breast, Damskaya, made by Deyros in true postmodern style, is a ripoff of Marilyn Monroe in her billowing lavender skirt.

Sometimes, you would not know that by picking a bottle you stand up for a cause. Absolut and Ketel One have all thrown their weight behind gay and lesbian communities in their struggle for differentiation. There are brands aimed at specific religious sects too. There are kosher vodkas produced under rabbinical supervision in Russia. The water is taken right from the Sea of Galilee, some claim, and their labels abound with Jewish symbolism. For naturalists, Stolichnaya claims to be organic vodka that comes from a highly fertile part of Russia where its artesian wells supply its water.

Amidst all that pandemonium comes the sober, sane and cleverly constructed voice of craft vodkas and anti-hype and anti-fancy ones like the Polish Sobieski vodka. Why should one go by the bottle and label instead of the content, they wonder, opening a debate on the purity of ingredients.

The battle will not end in any near future, and nor will vodka experiments. The ceaseless tinkerings with new flavours, colours (there are even black vodkas) and infusions have resulted in drinks that taste like bacon, salmon and even other alcoholic drinks. The Dutch Van Gogh vodka produces absinthe- flavoured vodka. If this goes on, you may even see it come as whisky and you’d hardly notice.

Plain vodka is a tabula rasa, a blank tablet waiting to be inscribed upon. By any truth, any narrative, any fantasy.

What is truth? So asked Pilate. In a world of complicated plots and fairy tales that border on magic realism, you can only invent yours. Now pick your poison.

(The writer is an associate professor of English who runs the website, Rumroadravings.com)