Of Husbands at the Receiving End 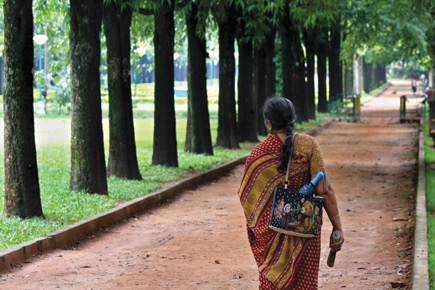 A growing group of harassed parents and their sons are rallying against the misuse of anti-dowry laws.


Devasandra is a semi-rural suburb in Krishnarajapuram district on the outskirts of Bangalore. A look at some of its rural remains may give you an impression that all is well with the world. A farmer is tilling his land and kids are at play on a patch of rice paddy with the mother tagging along: to the unsuspecting eye, it’s a picture of marital bonhomie.

But less than hundred metres from a snapshot of bucolic bliss, a retired gentleman standing in the balcony overlooking his farm is getting phone calls that rip the heart out of notions like domestic harmony and marital bliss. The man, Balmiki Nayak, is a counsellor in the newly instituted All India Mother-in-Law Protection Forum (AIMPF), and is yelling back instructions in chaste Hindi to a young man in Greater Noida, Uttar Pradesh, who has an FIR filed against him and his parents by his wife for dowry harassment. The name of the organisation may give one the impression of mothers-in-law being harassed, but in truth, it is a collection of fathers-in-law and theirs sons primarily.

“The institution of marriage as we see it in India,” says Nayak “is going for a toss. And this is especially true of middle and upper-middle class India.” On any given day, Nayak receives up to 20 phone calls from places as diverse as Bangalore, Hyderabad, Meerut, Kolkata, Chennai, Delhi, Mumbai, Orissa, Dubai, Doha and Muscat and beyond. These are from young married men whose wives have accused them and their families of harassment by invoking Section 498-A and dowry harassment. Nayak tells anxious callers of the modus operandi of the ‘affected wives’. He details them of the ins and outs of Section 498-A and dowry harassment and informs callers about what to do when confronted by the police. He feels, regardless of the overall powers that Section 498-A of the Indian Penal Code (IPC)—it kicks in when a husband or relative of his subjects the wife to cruelty—has given women in this country, a slimey section of urban middle-class India is abusing it. A victim of such an ‘abuse’ himself, Nayak cites a telling example of another family that went through similar pangs.

The Mohantys, a middle-class family of three from Orissa, were looking for a bride from the state for their only son, Vineet, a software engineer in Bangalore. After several meetings with potential alliances, they zeroed in on one girl from a similar middle-class background.

Before marriage, the girl and her parents were invited to stay for a week at her potential in-laws’ place to acclimatise themselves to the new environment. The girl’s father insisted on buying a bigger bed for her daughter. The boy’s parents did not ask for dowry. Everything was hunky-dory. Boy and girl got married.

Within a fortnight of the marriage, things started to change. The girl would routinely badmouth her in-laws and husband for no apparent reason. She would lock herself up in the room and be in constant touch via mobile phone with her folks in Orissa. One fine morning when the husband and father-in-law were away, the girl’s brother landed up at the house. The girl and her brother cornered the mother-in-law and sped off to Orissa along with her belongings. The next day, the Mohantys heard news that a case of dowry harassment has been filed from Orissa. Before the cops landed, they had their anticipatory bail ready. These happenings, Nayak emphasises, are the crux of the stories that have played out in the lives of the members of the AIMPF. They meet and discuss these issues every Sunday at Cubbon Park in central Bangalore.

Virag Dhulia, who suffered a similar trauma and is an executive member of the AIMPF, says, “In principle, Section 498-A and dowry harassment laws are meant to protect harassed wives. True, in large parts of India, especially rural India, women go through hell. But in the case of the members of the AIMPF, we have only seen the law being abused, husbands unfairly harassed and the parents of the son undergo mental trauma.”

Formed in late September this year, the AIMPF, has ‘moral backing’ of the Save Indian Family Foundation (Siff), and has been organising a range of activities for raising awareness on how Section 498-A and dowry harassment laws have been misused. They have also been approaching the Government of India for institutionalising an organisation for men’s issues.

“If there’s a National Commission for Women, why not a National Commission for Men?” asks Dhulia. “There’s a problem as far as the role and function of men in Indian society is concerned. Let’s face it, we’re living in a time when the urban educated woman is clearly standing up to men, and outshining them on several fronts. Why then, do we have a blanket law like Section 498-A? Also, invoking this law immediately puts the girl’s in-laws and the husband in jail. But what happens if the boy and his parents are found not guilty? Shouldn’t the boy and in-laws of the girl be compensated? Why shouldn’t the girl be fined for pressing false charges?” fumes Dhulia.

Naveen Kumar, another software engineer whose wife has pressed harassment charges against him, highlights another point. “In many of the cases, it’s not the girl acting in isolation. There’s a larger network of police and lawyers working in cahoots to execute Section 498-A, no matter how flimsy the grounds for its invoking.” His arranged marriage lasted just four months. “In the case of my marriage, the divorce lawyers were the ones who gave information about 498-A to her parents.” When Open got in touch with his wife, she refused to talk.

After a trial that lasted nearly two years, Naveen Kumar and his family were found not guilty. When his wife had pressed charges, Naveen’s mother and retired pensioner father, nearly spent a night in jail before getting bail. His mother gets teary-eyed recounting the duress. “The girl abused us. Look at us, do we look like monsters?” she asks pointing to her son and husband.

On its part, the AIMPF is expanding as an organisation. This month, the Andhra Pradesh chapter was opened, and they are in the process of creating more state-level forums. They already have a kind of ready reckoner called Section 498-A and Domestic Violence Act (DVA) 2005 Survival Kit. It spells out to affected husbands and their parents what to do and what not to when the daughter-in-law invokes these laws.

The AIMPF has approached the National Commission for Women (NCW) on a number of occasions. The forum wants the NCW to note that provisions of both DVA 2005 and Section 498-A have been roundly abused by some married women, and to put certain strictures to check the misuse of marital laws.

When contacted by Open, an NCW spokesperson refused to comment on the matter. The AIMPF has also been emailing its concerns to various governmental departments including the Prime Minister’s Office, the Ministry of Law, and Ministry of Women and Child Development.

Sudha Sundararaman, general secretary, All India Democratic Women’s Association, (AIDWA), Delhi, is somewhat sympathetic to the cause of the AIMPF. “We need to understand, that mothers-in-law are women too. If there are grievances as far as the misuse of Section 498-A and Domestic Violence Act of 2005 are concerned, they need to be addressed. But let’s not forget that these laws are only the beginning in terms of legal empowerment for wives, women and mothers in India. Just because there are some cases which have been the raison d’etre for the AIMPF, doesn’t mean the law itself need be rejigged.”

A few Sundays from now, the AIMPF is planning to hold a dharna in central Bangalore to draw public attention to the issue. At last count, AIMPF’s membership has gone up to more than 200. “In an ideal society, an organisation calling itself a mother-in-law protection forum must not even exist,” rues Neena Dhulia, Virag’s mother. “It’s ironic that our numbers are increasing. It just tells you how many lives are going haywire.”

Some names have been changed to protect identities