Here’s a salon for transsexuals that offers them beauty services, advice, gossip, camaraderie and the space to be themselves 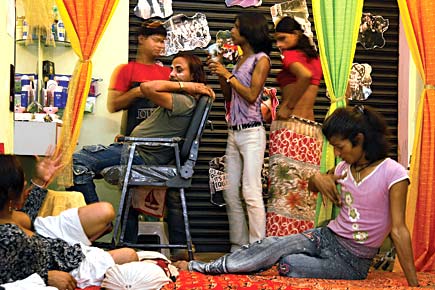 Here’s a salon for transsexuals that offers them beauty services, advice, gossip, camaraderie and the space to be themselves


Here’s a salon for transsexuals that offers them beauty services, advice, gossip, camaraderie and the space to be themselves

PAHAL, FOR 19-year-old Payal Sharma, is more than just a beauty parlour. She comes here for comfort, conversation and dance sessions. As she catches a glimpse of her friends, she break into a beaming smile. “Mere bina yahaan koi excitement nahin rehta (without me there isn’t any excitement here),” she giggles. That’s Pahal Beauty Parlour for you. Staffed entirely by transgender folk, this is one of India’s first to offer grooming services for trans- and homosexuals.

Started this April in Delhi suburb Faridabad, the salon is an initiative of the Pahal Foundation, an HIV-Aids NGO. The place is abuzz with dollops of gossip to spice up waxing sessions and the like. Even first-time clients, unable to resist the infectious charm of the staffers, find themselves drawn into lively conversations. It has rescued transgender vanity needs from the excruciating experience of paying the neighbourhood place a visit. “We found that they faced extreme discrimination at mainstream beauty parlours,” says Rahul Singh, a founding member of Pahal Foundation, “There was strong demand for a parlour that would cater exclusively to their needs.”

What Pahal offers, above all, is that rare commodity that the ill-understood are forever gasping for—breathing space. Staffers and clients help each other overcome self-consciousness and reserve. As far as discussions go, ‘no holds barred’ seems to be the theme, with inhibitions dropping faster than shorn hair —on subjects as sensitive as sex, condoms and the contraction of deadly diseases. Often, what the parlour’s patrons find the greatest relief in shedding, though, are their ‘manly’ pretences, as they ease into their comfort zone and let their feminine personas emerge. Just having themselves addressed as ‘she’ or ‘her’ can give them a sense of inner harmony.

Payal, for example, was fraught with inhibitions before she came to Pahal. Today, she is not just a beautician but also an active participant in a peer-based programme for MSMs. “I don’t believe in being modest. If I think I am a fantastic dancer, why shouldn’t I say so?” she exults, ever ready to get grooving. Besides Payal, there are four other beauticians, with some of them doing the odd day job as receptionist or clothes vendor.

One person they all look up to is Simmi, who is a veteran in the grooming field. Having worked with Sylvie and Images in Lajpat Nagar II, Delhi, she uses all her experience to mentor these youngsters. “We started the ground work for the parlour last year,” she says, “After speaking with people from the community and other beauticians, we decided on the various packages.” Though the parlour has opened only recently, it has begun to attract 10 to 15 clients a day.

It wasn’t easy, initially, to break convention. At first, the parlour was located in a residential colony, but stiff opposition from scandalised neighbours forced it to shift to a commercial complex, where Singh and his colleagues held sensitisation workshops for the shopkeepers around. Thankfully, it all worked out well, and Pahal found acceptance as just another salon.

Many staffers set about breaking moulded mindsets as a personal exercise as well. Growing up as a transgender or kinnar (their preferred term) in India is a toughening experience. Their sexuality was looked upon as a bad habit, something that would wear away with time. Simmi, for instance, faced her father’s wrath when she disclosed her sexuality. “Papa was bent upon getting me married. I didn’t want to spoil any girl’s life,” she says, “So I asked him if he would marry off my sister to a guy like me.” Her father persisted in his efforts by calling a tantric home to exorcise his son’s body of “the aatma of a hijra”, as he called it. When occult methods failed, he locked her up in a room for four days without food or water.

Her mom, though, was empathetic. Real empathy, however, comes from intense bonding, which is something they often find at Pahal. Take Payal and Heera, who now see each other as soulmates. “I used to think that I was only one of a kind, that I was weirdly different. Then I came to Pahal and met more like me. I now love my life,” says Heera, “And what I really want is the support of my friend Payal. Every day I pray to God that whatever is thrown our way, we both deal with it together.” The two are inseparable.

Simmi blushes like a schoolgirl in the first flush of love as she talks about her boyfriend of 16 years. “He used to stand outside my school. I would watch him from a distance. One day he just came up, kissed me on the cheek and confessed that he liked me,” she smiles. The reproachful gaze of bystanders broke her courage, and she ran away after slapping him. “When he came back after three days, I apologised to him and told him that I liked him too,” she adds. The pair has seen many ups and downs together, from getting their families to accept the relationship to dealing with their own differences. “Every couple fights,” she says, “But we ensure that a third person never comes between us.”

The warmth of these relationships is what keeps them going. The beauticians and their loyalclientele revel in the fact they have found a place where bloodlines and rules of society can’t touch them. The friends they have found and the love they have discovered have bound them in ties best described as familial.

As the evening stretches on, the revelry in this tiny parlour picks up. Tanya, who has been a regular customer for four months, taunts Heera sportingly as a dryer comes unplugged, “Kaam toh thheek se seekh le (At least learn your job properly).” It elicits a shy smile from Heera.

Spreading cheer and laughter all around, Tanya comes around to us to introduce herself. “Hi, I am Tanya, nice to meet you. Bas mujhe itni hi English aati hai (That’s all the English I know),” she chortles. Part of a kinnar group, Tanya does not get much time from her routine to visit the parlour every day. However, the urge to share every personal detail and anecdote with the group draws her here almost twice a week.

The whirring sound of the blow dryer mingles with the songs blaring from the TV set, as another loyal customer, Nandini, gets her hair coloured. A hush descends for a moment as the promo of the film Fashion appears on the TV screen, with all eyes following Priyanka Chopra’s every move. “Smart lag rahi hai (She’s looking smart),” says Nandini in admiration. Payal, in a bid to draw the attention back to herself, puts on her favourite song and starts dancing like a pro. The music draws Heera from her hiding place behind the curtain to the centre of the dance floor. “No one here has to feel sorry about herself, we are what we are. One should feel happy about it,” says Payal, as she manages a beautiful twirl.