Memories of a Stud

Anand Jon, sentenced by a US court to at least 59 years in prison, was once the heartthrob of girls. He was then Anand John Alexander 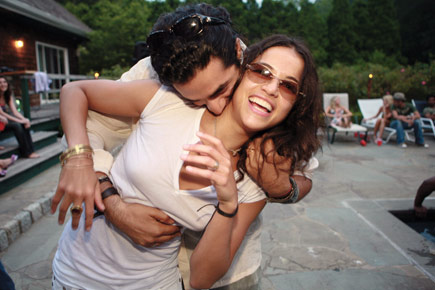 Anand Jon, sentenced by a US court to at least 59 years in prison, was once the heartthrob of girls


It is possible to tell the story of Anand John without describing the sexual melancholy of Madras at that time. But that would be an undeserved favour to the desperate world around him which got away, unlike him.

It was a time when the symptoms of modernity and the signs of affluence were the same, and the middle class was closer to the poor than to the rich. Among the adolescent boys then who had to wear fake brands, who could not always afford Pepsi (Coke would appear two years later), there was this feeling, which was a type of wound, that only the fair modern guys had all the fun. So the boys who could not attain the girls they wanted to touch, tried to grope them anyway. Men who are respectable today, when they were boys they pounced on girls during Holi, squeezed their breasts while smearing colour and ran away laughing. There were gangs of college boys that boarded crowded buses every day and travelled from one place to another for no greater pursuit than to pull the elastic of panties and release them and rejoice when the girls leapt. Many of those boys belonged to Loyola College (‘Let Your Light Shine’), which by then had been diminished by circumstances.

In 1991, on the first day of college, most boys walked around with a sense of defeat, or probably it was fear. To be in the famed boys’ college meant they had not scored enough to get into an engineering college or their mothers did not have enough ornaments to sell for the capitation fee or the boys did not know what they wanted to do. Then a divine sight filled many hearts with delight. Eight girls were seen walking down the pathways. They were in trousers and skirts. For some reason, a swarm of girls is always pretty. Their appearance was the result of a revolutionary decision, most uncharacteristic of Jesuit priests. For the first time in the history of Loyola, girls were allowed in an undergraduate course, in a new department called Visual Communications which was set in one corner of the campus, near a garden maintained by the Rotract Club where a marijuana addict would soon try to grow the weed.

In a college of about thousand boys, the eight girls walked nervously, usually together, at first.

When they appeared on a corridor, a silence would grow. Some boys lost their minds. They wanted to join Visual Communications. Others waited in strategic corners to create accidental meetings. There was sudden infatuation and whistling. The girls heard themselves being described as various vegetables and fruits and animals. The professors feared for their safety. Not that the professors themselves were unaffected guardian angels. A girl remembers a history professor asking her when she was alone in his room, “Do you respect me?” But what happened after a few weeks was extraordinary. The Visual Communications department saw the late admission of a boy. He would leave in a few months but it would be hard to forget him.

He had a beautiful face, his hair was long and his head was held high. “As if this was not the first time he was going to college,” a classmate remembers. Most days he was in jeans that were torn in various places, especially at the knees. He wore bracelets and several silver rings. And he walked alone. In boots. When he walked down the broad corridors or entered the canteen, boys stopped talking, heads turned, eyes rested on him. And Anand John would have a smile on his face.

The girls were around (they were now banned from wearing jeans by the Jesuits) but Anand John was the event. Everybody began to discuss him and word soon spread that he had this magnetism, that he could somehow detach girls from their precautions and make them go astray. And a myth grew that even when he was in school he was a comet whose tail was made up of girls so pretty their fathers usually hid them. And it was true, it seemed. An enduring image of Anand John is of him lying sprawled on the bonnet of a car, a flute short, surrounded by a swarm of tumultuous pretty girls in school uniforms. The car was parked in a space that was so sacred it did not have to emphasise common sense through a no-parking sign—it was right in front of the Principal’s office.

There were many stories about him and he was linked to several girls. His world seemed to be very large then. A world filled with women. A world also called “the field”. As his male classmates now say, frequently, “He played the whole field.” Many years later some of those girls from the field would appear on Facebook, their faces somewhat bloated, mothers now, their husbands still in the dark about the times when Anand John touched them indecently.

For all this, for the way he was, for living the aspiration of every male, Anand John was the most hated person in Loyola. “Half the boys want to beat me up and the other half want to kill me,” he once told a friend. Needless to say, seniors ragged him. John once entered his class holding his shoes. He said he was asked by the seniors to walk in the Cooum, a dark green river of sewage whose stink the blind famously used as a sign to get off the bus, and into which miserable people jumped confidently in the knowledge that nobody would be willing to save them.

People wanted to believe that he was a moron, just another rich kid. And this desire was realised through smirks and chuckles at the mention of his name or at his sight. But the truth was that Anand John was a great talent. His sketches were breathtaking. They were always black and white, usually figures and nudes. When he wanted to impress a girl he would draw her portrait. Who could compete with such a force? He was also a keen drummer and a passionate fan of Jon Bon Jovi (probably why Anand John would later become Anand Jon). He has a musical pedigree. Singer Yesudas is his uncle.

Most people who hated him were similar—they had never spoken to him and they were male. There were many who were too intimidated to talk to him, as if Anand John would turn away without a word and they would be emotionally scarred for the rest of their lives. But those who knew him well recall a boy who was, above everything else, extremely polite and well behaved. He had a certain class, a way of talking that was interested and endearing, “a strange maturity”, as a classmate remembers.

The eight girls in his class, they were seldom seen with him on campus. To be seen with Anand John was to confirm what everybody wanted to believe—that their knees too had yielded. And nobody wanted to be known as his scalp. Now those girls are women and they remember him very fondly, though with a chuckle. “He was a nice guy,” says a classmate who was rumoured to have had something going with him (which she denied), “But most guys hated him. They definitely wanted him far away from their sisters.” Another girl who was in his class, who is now a mother of two kids, says, “He never made a pass at me. I was not close to him or anything. I only did his French homework.” The girl, at that time, was the infatuation of all. She was in the Beginners’ French class. Everybody, it seemed, was interested in her and as a result nobody had the courage to sit close to her. So, most of the time she would sit alone on the front bench. One day, Anand John decided to attend class. As he walked to her and sat by her side, there was an inaudible sigh, as if the girl was now unattainable to the rest. Anand did not talk much to her, though. He started sketching. The French teacher, a thin austere woman whose sari never showed an inch of her skin, went to him and stood by his side. Anand proudly showed her his sketches. They were nudes. She blushed without changing colour. “Good,” she said.

He was very close to his older sister, Sanjana, even then and they used to appear at parties together. “He in leather pants, she in leather minis. Leather. In Madras,” an old acquaintance remembers, “When they arrived everybody would know they have come. It was strange, they used to dance a lot together. Even when a slow number was playing.”

It is not uncommon for siblings from broken families to be very close, and to express that love. Anand’s mother Sashi separated from his father and remarried. She ran a beauty parlour called My Fair Lady where John would straighten his hair. He was very close to his late grandmother who adored him and was very proud of him. A family friend says, “It was odd to see the two—the grandma and the grandson—so close. Can you imagine, a hottie who was very fond of his grandma? Thank God she is not around to see what has happened to him.”

Anand Jon, the schoolboy who once sat by himself and drew “skulls and light coming out of skulls” and who later grew up to achieve some sort of fame as a fashion designer in New York, is now destroyed. He has been sentenced to a minimum of 59 years in prison following charges of sexual assault filed by several women. It is possible that he may never be a free man again. And that fills the hearts of those who once knew him with a transient heaviness. “Very sad. Anyway, forget it. What’s up with you? Have you been watching the US Open?”