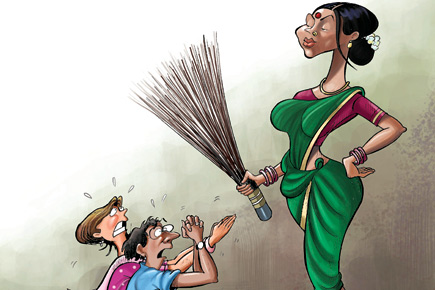 
Shyla Kapoor is a bad sleeper. So when her live-in cook, Mathai, began sneaking back home past midnight, she knew. “He always went out after clearing away the dinner, around 10 pm,” she says. Initially his breaks were half- hour long, maybe an hour, but from January they lengthened—first to midnight, then one, once past three. It wouldn’t be an exaggeration to say that Shyla didn’t sleep soundly through most of the first quarter of 2010.

Shyla’s Mathai is a 62-year-old man who’s nature is marked by excesses—he talks too much, he is terribly melodramatic and argumentative, cooks extremely well, highly trustworthy, and—oh, yes—he drinks. Except for short periods when he was packed off to detox, this striking personality has commandeered Kapoor’s two-person household for six years. In March, Shyla’s tolerance took a massive beating. “One night I woke up just after three. I may have heard something, I wasn’t sure, but I knew Mathai wasn’t back. I went to the front door to look out of the key hole, and there he was, flat on the ground, snoring asleep on my doormat.” As he—sheepishly, in a choking voice—explained the next morning: he’d had another phone-fight with his family, so he went out and drank to numb the pain, sat outside the door to compose himself, but blanked out before he could get up. At the moment, Mathai is off for another detox.

There must be cultures where it’s uncouth to discuss ‘the help’, but ours is definitely not one of them. In India, you pack a group of people into a room, and the subject of ‘servants’ usually works its way into the conversation.

Chiara Dimase, who works as a consular assistant at the Italian consulate in Mumbai, says she was initially surprised by this Indian need for “staff”. “It sounded like a luxury,” she says. But 12 years in this country, and a six-year-old boy later, Chiara has gone native. “When family members in Italy heard I have a driver, and a maid, they thought I must be very rich,” she says.

Maybe it’s the heat, maybe it’s the incessant carpet-bombing of dust, dirt and insect-life that requires constant cleaning; it could be our multi-dish meals. Whatever it is, our mothers negotiated their environment with paid help—a bai, plus a Maharaj, or an all-in-one. There were, after all, plenty of people for the job. But times have changed. The conditions, priorities, and circumstances of the floating transients who once helped people keep home have changed, and it has altered power equations in hundreds of thousands of urban Indian homes. It’s definitely not an employers’ market.

The imbalance between demand for domestic help and the supply is so disillusioning that some people go as far as to tolerate conduct they normally find reprehensible. “You know what they say, the devil you know is better than the one you don’t,” says 30-year-old Pearl Mehta.

For the past several years, a middle-aged lady, who lives with the Pearls’ ailing septuagenarian aunt, has attended her South Mumbai Parsi family. Recently, they discovered small sums of money would go missing from the older woman’s home. Since no one else had access to the apartment or knew what was where, they concluded the maid was the most likely culprit. What did they do? “We’ve kept the status quo. We sort of hinted that we know but she said it’s not her and we can’t push it. We make sure there’s no cash lying around.”

Young parents, couples at the beginning of ambitious careers, understand. Jolly Mishra, 35, a marketing executive, and her investment banker husband, already have a rambunctious two-year-old boy, plus a pair of twins is scheduled to arrive in a few weeks. In February, an agency sent Jolly a maid who, to date, has asked for and received several salary raises. Jolly’s praying that she’ll also find a nanny before the babies land. She has to get back to work in September after a prolonged maternity leave, and says she doesn’t want repeats of her worst moments as a new mother. “When Madhav was a year-and-a-half years old, I had to go for an urgent meeting and I didn’t have a maid. I was forced to get my driver to babysit while I rushed back and forth to office.”

By now, she has dealt with all sorts of maid problems: theft, alcoholism, and indiscipline, even disappearance. So much so that the Thakurs wondered if it was something about them that repelled domestic help. Also, there are questions employers have regarding maid-etiquette, questions that are probably unanswerable. How close is too close? How much money is too much money? Is a loan foolhardy or prudent? Arpita Chatterjee, a 31-year-old Mumbai-based scriptwriter and mother of a mischievous three-year-old son with a newly-fractured arm, says her maid is an emotional attachment, more crucial to her everyday sanity than even her husband. Because even though the maid only works for Arpita two hours a day, that’s two hours Arpita gets to shop, to meet people, two hours to just be herself.

Thirty-three-year-old Ruchika Kumar, a mild-mannered stay-at-home mother of a two-year-old, is like most of the women in this story, a different sort of employer. One who’s also willing to pay. Ruchika sourced her maid through a friend in the Hopping Bunnies support group for expatriate mothers. Ruchika’s helper earns a healthy five-figure salary, far above the average of Rs 4,000. “My son has lost some play dates though, because some mothers were worried their maids would find out my maid’s salary,” she says.

But very soon, in the unhappy world of employer and maidservant, a hero might rise. In October, 31-year-old Ashish Goenka, a former investment banker, will launch a company: Maid In India (MIA). Goenka’s idea is social-minded and unique, if head-smackingly simple. “My organisation will hire the workforce, and I will place a maid with you. I guarantee uninterrupted service and you will get what you want, a maid, a cook who makes Chinese, or one that only does Continental, whatever. You don’t employ the individual directly,  you deal with the company.”

Goenka’s plan is to build an army of high-quality domestic staff who will be given essential vocational training, a guaranteed source of income, even insurance and loan facility. At the moment, he’s running a pilot programme based on this model, with 25 maids placed in 25 households. His long-term plan is a national 100,000-strong workforce. There are plenty of people who want Goenka’s dream to come true.