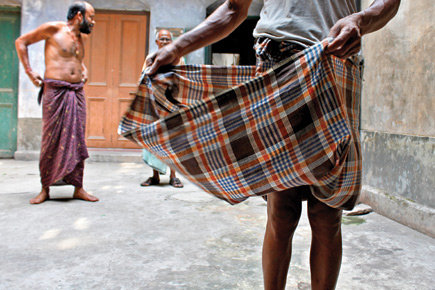 Let’s face it, we’ve been over-reacting all this while that Indian fashion designers have been trying to recommend skirts for men; or glossies have panned Indian men for not knowing what to wear on a beach. We’ve been skirt—or at least wraparound—buffs long before the kilt-clad Scots knew one clan from another… and what’s a lungi but a wraparound? And anyone who’s seen a potbellied, paan-chewing gentleman in a check-wraparound, or a similarly built gentlemen on a motorcycle, his lungi pulled all the way up to his knees riding a motorcycle down South, will agree there is nothing camp about it. In fact, it’s often a symbol of old-world male chauvinism. The only force that deters us from saying that the lungi is a testament to Indian drape sense is the sari-Nazi. But the fact is that we’ve been wearing the lungi long before we turned coy. After all, when God looks down on you, it’s with pride. When the devil looks up at you, it’s with fear.

Osamu Suzuki, chairman, Suzuki Motor Corporation, loves his booze. And, on guests he considers special, he showers his hospitality in his personal dining room decorated with the best spirits of the world: nearly 200 bottles—one each of the best liquor from the countries where Suzuki operates. From India, Old Monk (OM) is the permanent fixture in that room. But that’s Suzuki. For the average OM lover, a well-stocked bar means having enough supply of the dark spirit to last till his or her next visit to the store. Rather than try out other exotic liquors, there is so much you can do to add variety to the drink: have it in winter, summer, autumn or spring. That’s four. Try it with water, Coca-Cola, a bit of lime, or just ice—that’s more. No true OM drinker really bothers about offering gyaan on which is the best way, or the best time, to savour it. The way you have yours is your deal. It’s about getting an OM high—one that takes you up fast and gets you back fast. Simple.

In 2009, even as the global economic climate worsened, and several fancied international publications shut down, the Indian news industry behaved as if it belonged to another planet. In the last 12 months, the country witnessed more than a dozen high-profile new magazine and newspaper launches, including Open. That makes India the only market of significance anywhere in the world where the print and publishing industry is expanding. This year, it’s expected to grow almost 10 per cent, with revenues topping $2 billion. Leading international brands such as Fortune and the UK’s Financial Times are expected to enter the world’s noisiest fray, to mitigate falling circulation and ad revenues in Western markets. In contrast, iconic newspapers and magazines elsewhere, such as The New York Times, are in deep trouble, gasping for survival. Newspaper ad income in the US, for instance, shrunk from $50 billion in 2000 to about $38 billion by 2008. No wonder, media moghul Rupert Murdoch is desperate for a slice of the Indian print scene.

A Cut above the Rest

The Wills Navy Cut brand was among the highest spenders on print advertising, ahead of even popular car and motorcycle brands, until the Government banned cigarette and tobacco advertising in 2004. Yet, for years together, ads for the 74 mm cigarette and the pack never changed. The reason: market research showed that the average Navy Cut smoker was just that, a smoker. Unlike the Gold Flake or Classic smoker, lighting up for him or her was just about having a strong and sturdy smoke. The term ‘navy cut’ comes from a tobacco cut popularised by sailors; they would put the tobacco in long thin canvas tubes and twist it tight. When taken out, it was a thick rope of tobacco that they could carry in their pocket. Legend has it that the peculiar length of the cigarette (10 mm shorter than a king’s size stick) would allow sailors to run up to the deck, have a smoke, and return to work without their absence being noticed. This brand alone constitutes over one-tenth of the Indian market.

For more than 150 years, the Indian Postal Service has transcended barriers to serve as a bridge between people. A vast network of 155, 035 post offices and 591,054 letter boxes makes India Post the largest postal system in the world. In addition to these, there are nearly 5,468 Panchayat Sewa Kendras that provide basic postal services to rural areas. ‘At the time of Independence, there were only 23,344 post offices in India, which were primarily in urban areas,’ says India Post’s 2008-09 Annual Report. Since then, the network has grown seven-fold, with a focus on rural areas. An Indian post office today covers 21.2 sq km and serves 7,147 people. ‘This compares favourably with the US where a single post office covers an area of 25,925 sq km and serves 8,029 people, and also with China, where a post office covers an area of 14,559 sq km and serves 19,962 people,’ says the report. The red and yellow colours of India Post’s logo stand for passion, power, commitment and joy. Postal officials hope that they can continue to spread cheer via their service. Snail mail isn’t stale mail.

In the holy city of Pushkar stands the marble-laden Jagatpita Brahma Mandir, which happens to be the only Brahma temple in the world. Although this structure was created in the 14th century, legend has it that the temple is nearly 2,000 years old. Thousands of devotees come here every year to pray. On the night of Kartik Purnima, Pushkar comes alive with its annual cattle fair, while the Brahma temple is visited by pilgrims from all across the land. So, why Pushkar? The story is that Lord Brahma was searching for a place on earth to perform a yagna, when a lotus petal fell from his hand. The spot was marked as Pushkar (pushpa: flower, kar: hands). However, his consort Savitri couldn’t attend the yagna, and in rage Brahma married a local maid, Gayatri. When Savitri arrived later, she cursed Brahma that Pushkar will be the only place on earth where he will be worshipped. Though smaller Brahma temples did crop up later in places like Uttar Pradesh and Indonesia, none were as legendary or prominent as the original one in Pushkar, Rajasthan. In fact, International Business Times has identified Pushkar’s Brahma temple as one of the ten most important religious places in the world.