A killer disease returns to Mumbai 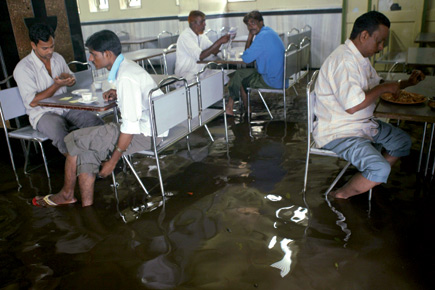 A killer disease returns to Mumbai


City reels under monsoon, Mumbai grinds to a halt as rains lash suburbs.

Even respectable journalese can state the literal truth sometimes. This year, like every year, the southwest monsoon took Mumbai by surprise. It arrived on schedule. It was not unusually severe. Our only surviving river, a viscid glide of filth, did not burst its concrete banks. Yet Mumbai reeled because with the very first showers, the municipal infrastructure collapsed irretrievably.

Right now, all of Mumbai is one vast suburb. Congested and potholed roads make the daily commute an odyssey. It was not just traffic snarls that kept many home this monsoon. They stayed home because they were too ill to work. Not all of them made the news: their diseases, ‘monsoon illnesses,’ were not notifiable.

Some were noticed. July began with eight cases of cholera, then there was the odd swine flu death, a few desultory pneumonias that may have been anything from avian flu to MersCoV. No public advisory of any practical use was issued.

The latest illness to make the news is leptospirosis. There have been four deaths from the disease. The best advice for the 20 million at risk is: ‘Don’t go barefoot in flooded areas.’

What kind of advice is that?

Is it okay to wade to work in chappals? Hasn’t anyone noticed the season’s unisex street chic? Sari, shalwar, jeans, trousers—everything hitched up way above water level. Don’t they know a rickshaw ride will get you a bath en route to the railway station?

Have puddle, will splash. But must we die from it?

Victims of leptospirosis may die of liver, kidney or respiratory failure. It is also a disease that can quickly become epidemic. And all we can find to say is don’t go barefoot in flooded areas?

Not that it’s bad advice, exactly. Yes, you can catch leptospirosis through abraded skin, and yes, don’t drink the water because rats urinate in it.

Is that very casual caution prevention enough? It reflects the bizarre disconnect between response and reality that defines our schizophrenic nation.

About a month ago, I heard experts on infectious diseases talk about ‘monsoon illnesses.’ Apart from the vaunted tests offered by their state-of-the-art laboratory, they had nothing new to say. I wondered how they had missed all the exciting shifts of thought medicine has explored in recent years. They were all professors, engaged in training tomorrow’s doctors, yet here they were spouting stuff already history when they were undergraduates twenty-five years ago.

When the talk turned to leptospirosis, the bored audience finally erupted. One physician barked, “What about garbage? What are you doing about clearing it?”

The experts reacted with surprise. The most eminent of them riposted, “Why are you asking us about garbage disposal? Whose garbage is it anyway?”

Another offered, “Garbage has nothing to do with it. Leptospirosis is caused by flooding.”

The question was answered by an embarrassed laugh. It is a common observation, it is well known, it is self-evident—yes, but why?

Following the Mumbai floods of 26 July 2005, 2,355 cases of leptospirosis were reported throughout Maharashtra. 167 people died. Earlier outbreaks (2000, 2001) had established that leptospirosis was endemic in the city. Reports of infection in children naively concluded with this circuitous statement: ‘Parents should warn their children to avoid areas flooded with contaminated water.’

Neither paediatricians nor epidemiologists nor parents thought to ask: Why are our roads flooded? Why is the water dangerously contaminated?

The thrill of discovery is very apparent in the name: leptospira, ‘fine spiral.’ These delicate almost-not-there bacteria were first linked to Weil’s Disease in 1916. Leptospira are spirochaetes. Like their more famous relative that causes syphilis, leptospira are best seen in a dark-field microscope. Not all leptospira cause disease—a huge variety of leptospira are saprophytes that exist happily in muddy and aqueous environments without causing disease.

Leptospirosis is a zoonosis. Pathogenic (disease-causing) leptospira primarily infect many species—from cattle to cats and dogs to rats. Most of these species are maintenance hosts: the infection is transferred within them and they also form a reservoir.

Leptospira’s favourite hangout is the kidney and diseased animals shed the infective germ in urine. Many types (serovars) of pathogenic leptospira are known. Some animals, particularly small rodents, are reservoirs for specific serovars. Humans are incidental hosts. Human-to-human transmission of leptospirosis is, as yet, unknown. But judging from emerging patterns of the disease, it will not be long before we hear of this.

Leptospira flourish in alkaline water, rich in oxidising organic waste. In water and soil contaminated with urine from infected rodents, leptospira live for as long as seven weeks. Humans are infected through skin and mucosal contact with rat urine. At any given time, in an endemic area, like Mumbai, the amount of leptospira in a puddle is directly proportional to the number of rats in the vicinity.

The average rat is about as socially wired as a Mumbai teenager, and urine is its Twitter account. It tweets every few minutes of its lifespan, and it tweets everywhere. It pees on every surface it crosses, kitchen counter or sewer, they are all one to a rodent.

What does the rat tweet about? Any teenager can answer that—profile, availability, networking. Leptospira just happen to be on the page.

The rat that infects humans with leptospirosis is not necessarily sick. It might have dusted off a mild infection long back, but the microbe has colonised its kidney and coated the renal tubules with biofilms that can persist indefinitely. A rat in the prime of life will shed about 107 (10 raised to the power of 7) leptospira in every millilitre of urine for almost a year after it has recovered.

An urban rat (Rattus norvegicus) has the longevity of about three years, and it is ready to date and mingle by the time it starts tweeting at the age of three months. From then on, with single-minded dedication, each metrosexual rodent can produce around 2,000 offspring a year. Let us hope there are distractions, but even if rodentologists have fudged their math, we still are left with an awful number of rats.

Mumbai’s professional rat killers have been international news and Rat Race, Miriam Chandy Menacherry’s documentary, spares us no illusions. What methodology of sense does it make to pit a few hundred men, armed with flashlights and sticks, against 88 million rats?

And that’s just in one city.

What exactly happens when leptospira enters the human body?

It works its way to the bloodstream and sets off fever, bodyache, and chills—in no way distinguishable from a myriad other infections, bacterial, viral or protozoan.

In the first week of illness, a bad headache and fever are the principal discomforts, and if you’re lucky, recovery follows.

Very often, leptospira persist into a second phase of illness: small blood vessels all over the body are targeted, and, depending on the organ affected, a wide variety of life-threatening complications set in. Weil’s Disease, with jaundice and liver and kidney failure is just one of them.

Between 1988 and 1997, 524 cases of a killer fever ravaged the Andaman islands. For want of a better name, it was called Andaman Haemorrhagic Fever (AHF). Victims bled into the lungs and died of respiratory failure. In 1994, AHF was discovered to be one more vagary of leptospirosis. The Andamans continue to be a hotspot for leptospirosis, but haemorrhagic pneumonitis is a common complication of leptospirosis all over India.

Why? Is this something recent?

Researchers have recently sequenced the genome of two pathogenic serovars of Leptospira. It is to be hoped that we will soon learn what turns leptospira virulent enough to kill. Until we do, there is one obvious fact we persistently ignore: the ‘size of the inoculum.’ A whopping hit of even mildly infective leptospira can prove fatal. And Mumbai, with Himalayan embankments of stinking garbage on every street, has made certain of that.

How common is leptospirosis? More than 500,000 cases are reported globally every year, but that is unrealistic. India is rapidly rethinking the leptospirosis map. Northern states, which earlier were out of the reckoning, now find more than enough reason to suspect leptospirosis in most acute fevers. Kerala, Gujarat and Maharashtra, where the disease is endemic, are seeing more threatening forms of the disease. Gujarat and Kerala have Leptospirosis Control Programmes that actually work. Sporadically the disease manifests in an unexpected form as it did in Madurai where the eye was the principal site of infection.

Are these avatars so unexpected?

Sushruta, circa 1,500 BC, seemed to have seen them all. They are elegantly documented in his Samhita, which also contains an exhaustive treatise on rats that can be read with profit even today.

A quick look at the names leptospirosis has gone by tells us its story. Miner’s disease, Trench fever, Mud fever, Swamp fever, all speak of the longevity of leptospira in slush. It is part of the memory of all rice-growing nations—Japan calls it Nanukayami fever or autumn fever; British India called it paddy field fever or cane-cutter’s fever. Veterinarians were familiar with red water fever in calves, canicola fever in dogs, and swine-herd fever in humans. Leptospirosis was once an occupational disease. It was also largely agrarian. Butchers, sewer workers, fisherfolk, livestock farmers and veterinarians were the high-risk groups.

Just about anybody anywhere can catch leptospirosis today. It is commoner in tropical countries because we have more people, more wetlands and more reservoir species. It is rife in post-disaster situations everywhere. Outbreaks are common after floods and deluges.

What if an area permanently assumes the ecology of disaster?

A new geographical zone has defined itself on the leptospirosis map: the overburdened metropolis. In cities like Mumbai, with an exaggerated dichotomy between the haves and have-nots, more than half the population lacks sanitation. And it is this beleaguered section that keeps the city up and running.

Every highrise is wired to a nearby slum for life-support: domestic work, security, supplies and sundries. Between them is heaped a garbage mountain of their making. Children play in filthy puddles around it, fishmongers peddle their catch, dogs and cats prowl about hungrily. The only invisible element in this circus is the sutradhar of chaos—the rat.

The rat is everywhere, and so is leptospira.

Yes, it can also kill.

No, there is no vaccine. Not yet. And considering the number of infective serovars, there will not be any very soon, one that is universally effective.

Yes, clinicians and researchers all over India are doing marvellous work. How much of this trickles through into policy? Control strategies can be debated and test schedules drawn up, but why not start with what is obvious? Why not clear the garbage first?

There are, of course, cogent reasons why clearing the city’s garbage has no bearing on leptospirosis—or indeed on cholera, dengue, malaria, encephalitis, enteric fever and the myriad gastrointestinal illnesses that afflict us. There have been no studies to show that these illnesses can actually decrease if the garbage is cleared. Other cities, other states, have even more cases of all these diseases, and even more rats perhaps.

And who said garbage is not cleared? Giant dumpsters kill schoolchildren every week, don’t they?

Oh, the stink? Get used to it, this is who we are. Whose garbage is it, anyway?

I was about to ask about civic pride when a rude laugh interrupted me.

Oh yes, in case you didn’t know, rats have many human traits. In addition to being sociable, empathetic and avid consumers of junk food, they also laugh.

This time the laugh is on us.