Indian Evolution: from Apes to Apps

The five most useful smartphone apps designed by Indians for Indians 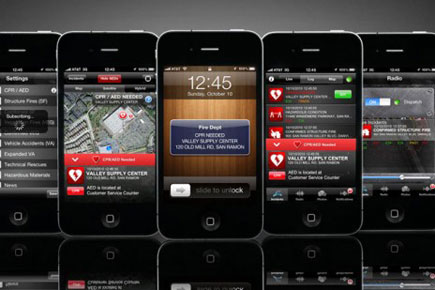 The five most useful smartphone apps designed by Indians for Indians


The portly figure of Gagandeep Singh Sapra, Open’s gadget geek, walks into this magazine’s office. Instead of technology, though, he has food on his mind. Thankfully, it barely takes the first few bites of what a food vendor across the office can rustle up for him to launch into a discussion with yours truly on Indian apps for smartphones—those neat little pieces of software that execute specific tasks on your whizbang handset, developed specifically by Indian developers and used primarily by Indian iPhone users.

Sapra schleps out his slick iPhone and iPad and lays them right next to our half-eaten rice plates. Not to be left behind, yours truly brandishes his own Jedi lightsaber—the latest iPhone 4S. Together, the two of us get down to listing the five most useful iPhone (3+) apps developed by Indians for Indians.

Earlier, the two of us had had an intense session on Twitter, with my attempt at Twittersourcing information on the best Indian-made iPhone apps for Indians in the considered opinion of the country’s Twitterati. ‘Tough question,’ replied a tweet from @AtulChitnis, former COO of Geodesic, an Indian company that provides mobile solutions (a job that includes developing apps, among other services). ‘Would be easier if you ask which are the most useful ones,’ he tweeted, proceeding to name his best five in no particular order. Next, on came Sapra—@thebiggeek—with his five. Then, all hell broke loose. There was a mini-war of tweets over which apps were developed abroad and which were desi.

In a country where an estimated 100 million apps are downloaded on smartphones every month, there are plenty of complaints about design and lazy coding. Some apps, groan several users on iTunes’ customer review section, lack backend support; the registration processes of banking apps are leading culprits on this count. And others find their apps’ utility strangled by the stuttering speeds of India’s 3G telecom networks. Siri, a voice-driven app that features a talking aunt on the iPhone, is a fine example of what streaming breaks can do—the talking app comes up with the sort of answers you’d expect of a drinking buddy eleven drinks down.

After several exchanges of tweets, speaking to app developers and coders, scouring reviews on Apple’s iTunes store, and randomly picking on iPhone users on the Delhi Metro and in other public places, the two of us shortlisted five ‘useful’ Indian apps. We have left out apps for gaming, pornography, religious devotion and astrology, and we have also excluded inbuilt apps for photos, videos, messaging, social networking and managing contacts. Here is the list of five, in no particular order: 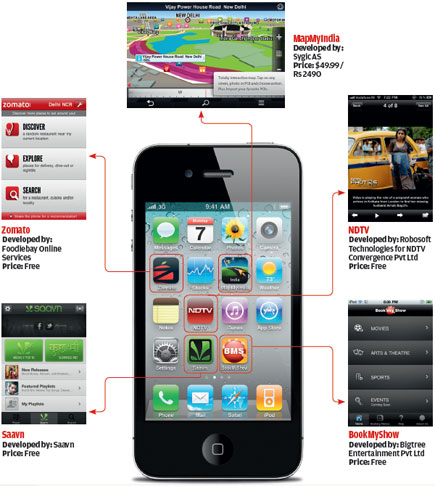 It was tough zeroing in on this one in the news category. Smartly designed and developed by Udupi-based Robosoft Technologies for NDTV Convergence Pvt Ltd, this free app gives the Indian user plenty of choices when it comes to live news, including real-time notification of breaking news. Citizens can become news gatherers themselves and send in what they see via the app’s NDTV iWitness feature. There are other features too. The only customer complain about this app are the advertisements, which are a little too instrusive.

The other news apps that came close to being picked were IBN Live, Mint, India Today (which has video clips within text stories), and Times of India. Some app users also mention Pulse on Twitter. Developed by two Stanford graduates from India, this app is an aggregator that delivers news customised to the user’s needs.

The only paid app to make our list (price: $49.99 / Rs 2,490), this is a voice-guided GPS navigation system developed by Sygic AS specifically for India. The maps are packed with both graphic and voice instructions that guide you street-by-street to your destination in any of its 1,200 Indian towns and cities mapped. Once installed, this 731 MB app resides in your phone memory, so you need no net connection to use it. “This is a great example of why localised apps are the future in India,” says MapMyIndia fan Rajat Agrawal, who runs bgr.in, a popular gadgets and technology portal.

Developed by Foodiebay Online Services, this is a great urban app that lets you search across 14,000 restaurants, spanning nine cities: Delhi NCR, Mumbai, Bangalore, Kolkata, Pune, Chennai, Hyderabad, Ahmedabad and Jaipur. It smartly detects your location and recommends the best restaurants around those coordinates. If you don’t like its pick, all you need do is shake your phone (as you would a jar of tambola chips), and, presto, a new suggestion pops up. For directions, it uses Google maps, and lets you surf the eatery’s menu, reviews, photos and discounts. You can feed it your own reviews and photos.

In the absence of live FM radio apps, this free facility developed by a firm called Saavn is the best Indian music app for your iPhone. Though it requires iOS4 or a latter edition of this Apple operating software, it has an amazing catalogue of hundreds of thousands of Indian songs that include Bollywood music, bhangra, bhajans, ghazals, and more. The app lets you create your own playlist and lets you share it real-time on Facebook Timeline.

What the Indian Railways and air travel industry failed to do for domestic travellers equipped with iPhones, BookMyShow has done for movie-goers. Created by Bigtree Entertainment Pvt Ltd, this app lists movie shows, and lets users choose seats and buy them directly on their smartphone through multiple payment options. The new version of this app promises the same facility for plays, concerts and sports events.

Other apps that marginally missed the cut here were mundu TV, Tata Sky Mobile Access and, last but not least, ICICI Bank iMobile.