Keep it short. That is Twitter’s message for you. Yet, in just three years, it has already got millions talking 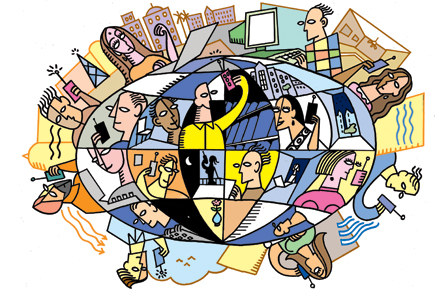 Keep it short. That is Twitter’s message for you. Yet, in just three years, it has already got millions talking


IT’S OFFICIAL—RUNNING for Gov of CA.  Wanted you to be the first to know. Need your help. Check out video:https://tr.im/iOCN and ReTweet.” Yes, that is how San Francisco Governor Gavin Newsom, 41, announced that he is officially entering the California Governor’s race in 2010. Instead of holding a traditional press conference, the Democratic politician used a free social utility tool called Twitter—which limits your messages to 140 characters (20 characters less than an SMS)—to reach out simultaneously to thousands of his followers.

With the click of a button, the Tweet (as Twitter messages are known) was sent to over 250,000 people. Within a couple of hours, it was retweeted (RT) and possibly read by over two million people. How can I boldly make that claim? Simple. Newsom’s Twitter buddy in Hollywood, Ashton Kutcher, RT’d the original tweet. This is likely to have been read by over 1.3 million of Kutcher’s followers. They, in turn, RT’d the original message, and the viral campaign continued. So, if you do the fuzzy math, it seems reasonable that Newsom’s original tweet must have reached at least two million people, who read it on their mobile phone, computer or Netbook. This visibility is not all that Newsom achieved. He also managed to raise about $15,000 through his Tweet appeal. That, in short, is the power of Twitter.

Still not convinced by Exhibit A? Consider Exhibit B. Earlier this month, talk show host Oprah Winfrey fumbled her way into writing her first tweet, and created history of sorts for this micro-blogging platform. Instantly, there was a 43 per cent increase in new Twitter followers. That is about a million new folks joining Twitter within a week. That is the power of Twitter. Last week, Oprah reiterated on her show that she writes her own tweets. By now, you are wondering what is this big fuss about Twitter? Welcome to Tweetland, Twitterland or, if you will, Twitterstan. Twitter is a three-year-old San Francisco-based company (we still don’t have a clear picture of its business plan to generate revenue) that started with a simple question: ‘What are you doing?’

To be able to answer that question or send your Tweet, you first have to sign up for a free Twitter account. The next step is to find a list of people to follow, or else your tweets will go unnoticed. To do that, you subscribe to other people’s tweets and they, in turn, may or may not subscribe to your tweet. Now when you start tweeting, others can RT, DM (direct message you) and reply to your tweet. It is all about engagement. Twitter is also becoming a default email for many since it allows you to directly communicate with people.

There is also a cottage industry brewing around Twitter, with all kinds of helpful tips, websites and applications. Don’t know the first thing about Twitter? No problem, there is a Twitter Survival Guide (https://multisocialmedia.com/ttsgusp/ttsg.html) that will walk you through the process. You can also turn to the Twitter For Dummies guide, or even The Twitter Book written by Sarah Milstein and Tim O’Reilly (credited with coining the term ‘web 2.0’). Not interested in reading? Not an issue. Mosey over to YouTube and spend all of two minutes learning about Twitter via video. Don’t want to be chained to your desktop in order to Tweet? Just whip out your mobile phone and send off the latest Tweet or picture. There are also numerous third-party applications available for your Tweeting pleasure. You think of it, and there is an application already out there waiting for you.

In the first two years of Twitter’s existence, there was a slow ramp-up, with early adopters helping spread the word. Twitter registered new followers at a good clip, but those numbers have jumped by leaps and bounds only in the last six to seven months.

In many ways, 2008 was a watershed year for Twitter. In April last year, an American student got arrested while he was travelling in Egypt. His one-word Tweet— ‘Arrested’—led to a chain of events that got him released. The next big inflection point came during the 26/11 attack on Mumbai. Thousands of people from all over the world turned to Twitter for updates. And earlier this year, when US Airways crash-landed on New York’s Hudson river, the first pictures appeared on Twitter. Over the past few months, Twitter is the place where millions of people have started turning to for ‘breaking news’.

Every major news organisation, from The New York Times to IBNlive.com has a Twitter account, and often journalists and writers associated with these organisations have their personal accounts here too. Washington DC-based Andy Carvin, senior product manager for the online communities of National Public Radio (NPR), says, “NPR uses Twitter in a variety of ways, including getting public input on stories to cover or people to interview; helping NPR fact-check presidential debates; real-time reporting of voting problems on election day; and documenting experiences during the [presidential] inauguration.” NPR’s politics has over 500,000 followers.

What is clear is that Twitter has hit the famous hockey stick curve that many start-up entrepreneurs dream about. In March, Twitter got 19 million unique visitors, most of whom from outside the US, including India. Sitting remotely in California, I did a quick unscientific survey of Twitter folks in India, and my results show that  most Indian Twitterers are located in big cities and tend to be pretty tech-savvy.

Given all the buzz around Twitter, it was no wonder that Google came knocking earlier this year. But the talks fell through. Who knows, maybe it will restart later this year, considering that Twitter has given Google a run for its money. Perhaps Twitter can even help Google expand its ad network in Twitterland?

In the meantime, some people feel that Twitter has lulled us into a false sense of social intimacy. True, maybe most of us don’t get Twitter and are following others blindly. But one thing is clear. Just like many of us initially did not get MTV when it hit the airwaves more than 20 years ago (we got it only after watching Mark Knopfler of Dire Straits sing ‘I want my MTV’) , or the blogging trend, just maybe some of us don’t understand the changing world, where brevity is the soul of communication. We have moved on from Andy Warhol’s 15 minutes of fame to Twitter’s 15 seconds of fame. We need our information fed to us in those 140-character bite-sized bullets. Can’t fit them in 140 characters? Sorry, cannot help you there—you need to change.

As Oprah likes to share every now and then: it is all about the ‘now’. It is about what you are doing now. Really, what are you doing?

Kamla Bhatt is the host and producer of the awardwinning online radio show, The Kamla Show. You can follow her on Twitter at www.twitter.com/kamla