Amidst the cold green hills of Munnar 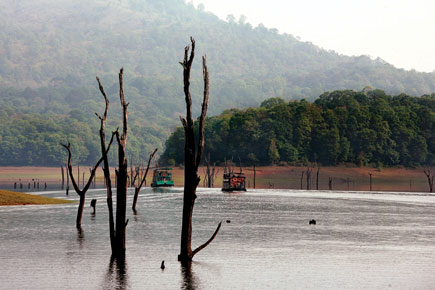 Amidst the cold green hills of Munnar


Somewhere between Mumbai and Kochi airport, perhaps on account of nodding off a little too often and little too hard, I developed a crick in my neck. I therefore saw Munnar with my head tilted slightly in one direction, but even from that angle, it was a damned good sight.

In April, God’s Own Country is in heat; the summer as vicious as only summers along the coast can be. It is sultry, and the heat is a film wrapping itself around you. While booking the hotel room, I had wanted an air-conditioned room. I was told that most hotels in Munnar didn’t have them. There was no need of it. Not wanting to put my faith to test, I checked with other hotels. It was true. Thus satisfied, I booked into Tea County. A room with a double bed came for Rs 4,800. There was really no reason for the choice. I had googled and liked the name. A tip here: summers are off-season and all hotels give discounts—on demand. You can shave 20 per cent off the rack rate.

The town, like most Indian hillstations, is a crowded agglomeration of shops and hotels and narrow clogged roads. Tea County is set on a hillock 10 minutes from the centre. It had pink cottages. I got the lower level of one. My room had a verandah. A road went winding down to the valley below. On the opposite hill, there were fields of tea. In the morning, I saw clouds drift their way gently over the road and between the mountains. The nights were misty and cold.

Most of Munnar’s tea hills belong to Kanan Devan Hills Plantation Company. The British had stumbled upon this region in the 19th century, and after some trial-and-error with various crops, finally got it right with tea. I got an overview of all this at the Tea Museum. It also featured a short tour of a watered-down version of a tea factory. The man giving the lecture started most lines with “We are a…”—“We are a plucking it…”, “We are a pruning it…”, “We are a preparing a very good cup of tea.” He must have been doing this for years without anyone suggesting that dropping an ‘a’ wouldn’t take anything away from his oratory. When we were a leaving the museum, the skies had darkened, and it soon started pouring. I returned drenched.

There is not much to do in Munnar except jaunt around. There are three scenic routes. Each takes about a day. The most popular is the Top Station route. Earlier, there used to be a ropeway to transport tea, and Top Station was the highest point. There is another route that leads to a national park called Eravikulam. It had several trekking paths, I gathered, one of which led to Anamudi, the highest point in south India. That was hard work, so I nixed the idea. Also, the queue would take hours. The third route is on the road that leads to the tiger reserve Thekkady. I was going to go there the next day anyway. So it was Top Station for me.

I hired a vehicle, and as we proceeded upwards, it became cooler and greener. We passed a Xylo that lay slightly battered. We passed Matupetty Dam, where a traffic jam was in evidence. Farther ahead, the vehicle stopped, and my driver Shankar said there was a colony of labourers below. Directly below in the valley, there were vegetable patches, then brief bursts of white cottages amid swathes of green, then little hills lush with eucalyptus, silver oaks and tea; and still further ahead, lording over this beautiful tapestry were mighty mountains kissed by white cotton clouds. A man could retire here if there was land to be bought. There wasn’t. It all belonged to the company.

You cannot enter tea plantations, but on the higher reaches, there is no one to stop you. Just before we reached Top Station, I got out and walked along a path that led into a plantation. I soon found myself surrounded by tea as far as the eye could see. I could have continued walking, but it would have led me nowhere. So I returned. At Top Station, a half-an-hour trek down the other side takes you to Tamil Nadu. I gave that a pass too and instead decided to have lunch. I got into a restaurant that offered two options—biryani and ‘meals’. I chose biryani and would have regretted it if the photographer accompanying me had not left his ‘meals’ half eaten.

As we returned, the weather went into shuffle mode, changing from sunny to overcast to cloudy to rain to finally a torrent. It does this all through the year around here. In the evening, I got an ayurveda massage to address my neck. I took the Express Treatment: 30 minutes for around Rs 750. I had a choice of ‘neck and back’ and ‘head and neck’. I picked the former. It was like an exorbitant painkiller—soothing, but only for a little while.

The next morning, in the first half hour of the drive to Thekkady, the road went up and down the mountains, and wherever you looked, there was a postcard. Lower down, tea gave way to other plants. Spice gardens dotted the roadside. Seven kilometres before the spice town of Kumily, I got into one and was shown around a five-acre grove. The dominant spice here is cardamom. Before leaving, I asked them to suggest a restaurant, and they gave me the name of a place where again I got two choices—biryani and ‘meals’. I took biryani again, and this time regretted it when the photographer gobbled down his ‘meals’ with relish. It was extraordinary, being stalked by terrible biryani.

There is no shortage of home stays and resorts around Thekkady. You can also check into one of Kerala Tourism Department’s hotels within the reserve. There are advantages and disadvantages to this. The park closes its gates at six and being inside means being stuck there in the evening. On the other hand, things done inside the park are done a lot easier. Boat rides on Periyar Lake are the mainstay, but there’s a long queue for a seat. If you stay at a KTDC resort, then it is just a short walk to the boat. Aranya Nivas, my hotel, came with a rusted tap and windows that couldn’t be opened in the day because monkeys might’ve felt invited. But for Rs 2,800, it was a huge room with a divan and a tub in the bathroom.

I took the 7.30 am boating trip. That and the last one at 3.30 pm are of two hours each. The trips in between are only for an hour. Seating was by ticket number. You can’t gambol or stand or rush towards the side when an animal is spotted. I had earlier visited two tiger reserves in Kerala and one in Maharashtra. I am yet to see a tiger. I have never seen anything more majestic than an elephant. Once a man sitting next to me saw a leopard, but it had disappeared before I turned. My record remained unblemished here. An antelope or two, a few wild boars that looked like dots in the distance, cranes and assorted birds was all that nature offered me.

The ride is pleasant, though. The boat ambles along in the morning light, crisscrossing the little islands in the lake, cutting through mist.

It was not designed to set the adrenaline pumping, and it didn’t. The only excitement was when a man in the row behind us angrily shouted at someone who stood up. I was told that those who go for night treks have better luck with animals. I didn’t do it. It wouldn’t have mattered. The animals know how to keep away from me.