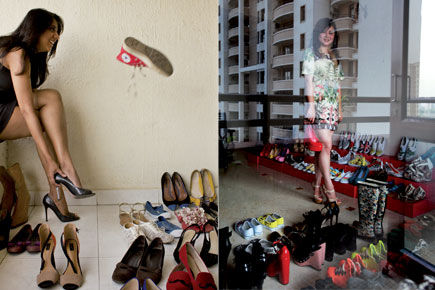 
A few years ago, Archana Walavalkar, a Bollywood stylist, was at a fashion week show in Colombo when suddenly gun shots rang out, the lights went off and there were screams all around. Everyone ducked, scampering in different directions. It was thought to be an LTTE attack. Walavalkar was part of a group being herded towards the nearest fire escape when her friend turned to her and said, “Take off your heels and run. Just throw them.” She couldn’t do it—they were new Yves Saint Laurent shoes. “How could I even think of throwing them? I removed and tucked them under my arms. There was no way I was going to leave them. Now they are still with me, almost falling apart. But they remind me of my near-death experience,” she laughs. “Yes, I know how shallow that makes me sound, but what can I do? I just love shoes.”

It’s an emotion many women will relate to. I often find myself staring at my shoes on a boring day and feel a warm glow of happiness flood me. I own around 30 pairs and find a daily dose of joy in walking around in a beautiful pair or just re-arranging them. When I went to the newly-open Christian Louboutin store at Horniman Circle in Mumbai last week, I felt like a child in Willy Wonka’s chocolate factory, looking at the walls lined with rows of beautifully crafted shoes with the designer brand’s iconic red sole.

The pair that I set my eyes on was from the designer’s spiked collection. Even though the price tag, which was above Rs 50,000, made me rethink my options, just looking at them fulfilled my art appreciation quota for the day. Since then, I have learnt how to pronounce Louboutin—Loo-Boo-Tan—after hours spent talking to shoe-obsessed women, during which I sometimes stressed the ‘Tin’ at the end, or spent too much time on the ‘Lou’. That spiked pair has become a part of my ever-growing list of must-haves.

Luxury shoe brands are conquering India one city at a time, and many women now own Louboutins, Jimmy Choos, Salvatore Ferragamos and Guccis by the dozen. Before they came to India, most brand-conscious women shopped overseas. Earlier, women were held hostage to the likes of Bata—especially their Marie Claire range—but over the last few years, women have had as many options as any other country in the world. Along with high street labels like Zara, shoe brands like Nine West, Aldo and Charles & Keith (which opened their first stores in 2002, 2003 and 2003, respectively) popped up everywhere. Soon after that, luxury brands started trickling in. Ferragamo opened in 2006, Gucci opened in 2007, and Jimmy Choo launched in 2010. Luxury shoes are priced anywhere from Rs 20,000 and to many lakhs. It was natural, then, for Louboutin, the latest entrant, to follow suit.

Walavalkar, who is 27, says that her fascination with shoes started because she was short and wearing heels made her feel like a woman. As a teen, she would slip into her mom’s fancy shoes and work on her balance. I noticed her at a recent Lakme Fashion Week because she worked her sky-high heels with so much confidence and ease.

“I have so many shoe memories,” she says. “I was in Milan for fashion week and went to a Bottega Veneta store and kept aside a pair I really liked. When I came back, the shop people said they were sold out. I was like ‘Nooo!’ But my best friend had got them put aside so that my boyfriend could buy them and gift me as a surprise for my birthday. It’s such a lovely shoe memory.”

Walavalkar owns around 50 pairs that she keeps adding to and discarding from. She remembers buying her Louboutins in Milan two years ago. “It was a classic pair, as he does it so well. They are made to be perfect. A Louboutin girl is a fashion conscious one.” Walavalkar splurges most of her shopping money on shoes but doesn’t spend too much time taking care of them. “I buy my shoes to have fun in them. If you bother too much, that sort of disappears. It’s more about the experience. Right now, I can’t wait to get my hands on the spikey Louboutins.”

For some women, good shoes are a favourite statement. Ishita Mookherjee often wears her ‘crazy’ shoes to work at Hungama Digital Media. She finds people come up to her and start conversations about them. “I know you can’t wear boots in Mumbai, but come on, some days I just want to. I need to wear my boots,” she says. The 32-year-old owns almost 70 pairs that are a mix of high street and luxury brands. She owns three Guccis, two Salvatore Ferragamos and one pair of Jimmy Choos.

Mookherjee has turned her balcony into a small shoe cupboard and spends every morning looking at her shoes lovingly as she gets dressed. She buys shoes every time she gets paid, and other times during the month. When she buys a shoe, she first slaps it against her cheek—a superstitious practice to make it last longer. Her shoe cupboard is cleaned every week, and stores a bunch of newspapers to control humidity. The shoes are colour-coded and the pairs she wears most often are easily accessible. Whenever she has people over, they ask to see her shoe closet—it’s the centrepiece of her house.

“You can be dressed up or down, shoes always make a good impression. I judge people by the kind of shoes they wear. I like shoes that make eyeballs pop,” she says. Her favourite are a pair of purple ballerinas by Ferragamo that just make her “so happy”. And though she loves high street shopping, she recommends that girls invest in luxury shoes. “I worked with a luxury brand in the beginning of my career and I really got to appreciate the kind of work that goes into making a shoe like a Choo. It’s art. But most people don’t get it. It’s like looking at a painting; you either like it or not.”

Many women, in India and abroad, owe their shoe love to a fictional character who made fashion come alive and become a part of their daily lives—Carrie Bradshaw, from the TV show Sex and the City (SATC). It was Carrie who introduced us to Manolo Blahniks and Choos and uttered those famous words—“Men, I may not know. But shoes? Shoes, I know.” One such woman is Tanaaz Bhatia, 32, founder and managing director of movie marketing firm Bottomline Media. Bhatia and her friends at New York University’s Stern School of Business used to have SATC nights. They would go out window shopping on 5th Avenue, yearning for the day they could afford to buy all those shoes.

Before Bhatia started working at Merrill Lynch, her father would buy her most of her shoes. Now she buys a pair a week. She owns around 140 pairs of shoes, of which 15 are Louboutins. She also owns many Manolos and Choos. “Nobody in India ever wore these. I would go to all events wearing my red soles.” She lives in a Mumbai apartment, and her shoes are housed across seven racks in her balcony, which, like Ishita Mookherjee’s, has been converted into a closet. “A lovely shoe, especially a high heel, can make you feel different. It just finishes a look,” she says.

A 2011 poll done by the American magazine ShopSmart said that the average American woman owns 17 pairs of shoes, spending an average of $49 (approximately Rs 2,500) per pair. In the shoe documentary God Save My Shoes, Louboutin describes shoe obsession in these words: “…for a woman, a shoe wasn’t an object. It was her prerogative.” In an interview with Irish television host Ryan Tubridy, Louboutin gave a detailed explanation of the obsession: “When a woman wears a shoe, she doesn’t look at the shoe, she looks at her body, her legs. The shoes are a pedestal for the whole body. It reshapes a person.”

Hot heels can make or break you. It may be a cliché but it’s true—a good pair of shoes can make you feel empowered and sexy. Lady Gaga is often seen in awe-inspiring, off-the-wall shoes, some with heels as high as 20 inches.

Singer Sophie Choudry says that’s how she feels every time she puts on a fierce pair of shoes. She’s a lover of designer shoes and doesn’t own or believe in wearing high street ones. “I am very particular. I like only well-made shoes,” she says. Sophie saw her mother run errands in stilettos, growing up in London, and remembers going shoe shopping with her when she was only seven years old. “I remember these white leather loafers with silver detailing. They were awesome.” She says that wearing high heels has altered her gait so much that even when she is not wearing them, she is always walking around on her toes. She bought her first Louboutins after watching Kylie Minogue flaunt them in a video. All her shoes go through a cleaning ritual that includes getting sprayed and polished by special products bought internationally.

Another designer shoe lover, singer Mansi Scott, says she actually employs two people just to clean her shoes during the monsoons in Mumbai. She owns over 200 shoes and has had three special cupboards made just to house them. “I can run in my Choos,” she laughs. “I am not a subtle dresser, so I like being in shoes that are a statement piece, off or on the stage.” She also feels that being able to spend that kind of money on a shoe is magical. “I think designer shoes tell a story,” she adds. “There is a history behind them and that makes them so special.”

For some, shoes are also an easy way to beat insecurities and feel like a Carrie no matter which city they are in. Delhi girl Nang Sheeha Namshum, along with her sister, launched a shoe website called Frica Shoes in 2011. She says starting a shoe business was a natural inclination. She owns around 40 pairs at any time and her collection is constantly updated by the shoes she curates on her website. She is honest about why she loves them. “I have always had body image issues and am constantly trying to lose weight. Shoes are my automatic go-tos. Shoes make any girl feel beautiful.”