Happiness as a National Goal

Bhutan may have voted out a government that put the pursuit of ‘gross national happiness’ on top of its agenda, but the concept still has special relevance in this country 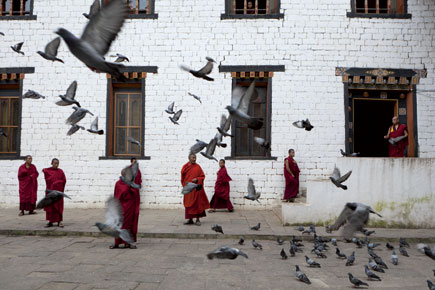 Bhutan may have voted out a government that put the pursuit of ‘gross national happiness’ on top of its agenda, but the concept still has special relevance in this country


In the last few years, Bhutan has generated a great deal of interest. In 2006, the Fourth King of Bhutan, while still in his fifties, abdicated in favour of his son, and both helped put in place the institutions needed for the landlocked kingdom’s first ever national elections in 2008, making the state a constitutional monarchy. Jigme Thinley, elected prime minister, decided to make a play on the world stage using Gross National Happiness (GNH) as the calling card of the state’s development policy.

A combination of the global financial crisis of 2007-08 and new trends in economics favouring wider measures to assess a country’s well-being led to much enthusiasm for GNH at first. Questions have since been raised over its utility, and now that Thinley’s political party, the Druk Phuensum Tshogpa (DPT), has been defeated in Bhutan’s recently-held elections, what was once seen as a brave new paradigm is being dismissed as merely a neat branding exercise.

Both the initial enthusiasm for GNH and its dismissal ignore the country from which it arose. It is impossible to understand how the pursuit of happiness became so central to Bhutan without understanding its bloody history and hugely challenging neighbourhood. The country was forged in war against Tibet, as well as wars of internal consolidation, in the 17th Century under the leadership of Shabdrung Ngawang Namgyal. These wars saw the first use of gunpowder as a weapon in the Himalayas and also included everything from claims of black magic to the use of smallpox, as well as one of the few defeats of the famed Mongol cavalry (their horses fell ill during the monsoon rains and died). While all countries have bloody histories, Bhutan’s geography—a country of mountains and only mountains—made it peculiarly susceptible to civil war.

Soon after the Shabdrung’s death, various factions arose in a fierce competition for power. In 1730, the Penlop (Governor) of Paro invited the Chinese-backed Tibetan Desi (Governor) of Tsang to invade Bhutan. Defeat at the hands of Tibetans shocked the country into some level of peace for a while, but a century later, the Bhutanese were happily raiding Cooch Behar to kidnap its prince even as they engaged in internecine warfare. It was only the climactic face-off between British and Bhutanese forces—led by Jigme Namgyal—in the Duar Wars of 1864-65 that delivered stability again.

Years after those wars, Jigme Namgyal was thrown from his horse, and as he lay dying, he made his sons promise to support one another. The eldest, Ugyen Wangchuck, went on to found the Bhutanese royal family in 1907. Among the principal reasons that various chiefs and monks of Bhutan agreed to crown Ugyen Wangchuck their first king was his consensual style of leadership and the respect he had won of the British and Tibetans. This combination could plausibly guarantee peace in a country in a dangerous neighbourhood. Centuries of civil war and internal conflict had extracted a huge price of the rich and poor alike, and nobody wanted a retreat to the old days. They needed a leader who would play a guiding role along a path they were all happy with.

This did not mean that internal strife ceased. In 1964, a Bhutanese prime minister was assassinated; in the 1980s, most Tibetan refugees had to leave the kingdom some years after an alleged plot to assassinate the king and blow up the royal palace; in the 1990s, there were mass protests in the south—including one involving 20,000 people—when Bhutan tried to integrate its citizens of Nepali origin into its dominant culture; and in 2003, the Fourth King, Jigme Singye Wangchuck, led his battle forces against ULFA and other Northeastern militant groups that had camps within Bhutan’s borders.

Despite these conflicts, the Wangchuck Dynasty has largely lived up to the responsibility of creating social cohesion. In fact, almost all the conflicts listed above were the result of a breakdown of that cohesion—identified by the king as Bhutan’s greatest challenge. In 2003, just before undertaking the military campaign against Indian militants, he had stated, “If the king was unable to prevent a conflict situation in the country, even if the people had nothing to say, the king himself must realise that he had failed in his most important duty and must take full responsibility.”

Quick economic growth was not enough to guarantee Bhutan what its people sought: peace and stability. In a later interview, he elaborated that a country needed to look at four basic priorities to preserve social cohesion and domestic harmony: good governance, cultural preservation, preservation of the natural environment and sustainable development. If these were not in place, then all of Bhutan’s development goals would be undermined.

The framework of Bhutan’s economy and the fact of his absolute power allowed the king to determine the pattern of development in ways that would be impossible in most countries. The public sector accounts for most of its overall income, whether from hydropower or tourism (foreign tourists, except Indians, pay $250 a day to visit the country, $65 of which goes straight to its government). There is only a small private sector, apart from a large agricultural economy just above the level of subsistence farming. Bhutan’s peculiarly named Gross National Happiness Commission is its Planning Commission, in charge of prioritising the government’s expenditure.

Bhutan’s economy, even in hard dollar terms, has sustained a growth rate near double digits for decades. According to World Bank data, its GNP grew 9 per cent in 2012 to touch almost $1.8 billion, which for a population of less than a million works out to an impressive $2,420 per head. Much of that income comes from hydroelectric power sold cheaply to India. And rapid growth has meant that the government in Thimpu has over the years not just delivered roads, electricity and water supply, it has also set up a robust welfare state with free access to health and basic education, apart from a slew of initiatives for every section of society.

Growth exerts its own pressures, though, and a more complex economy and better integrated society that emerged from Bhutan’s development model created a polity that no monarchy—no matter how well led—could manage efficiently. The transition to democracy was a way to deal with this problem before it overwhelmed the country.

With democracy, though, has come personality-oriented politics. Amplifying it is a free media that started with one private newspaper in 2006 and boasts of a dozen now, commenting volubly in English and Dzhongkha about politics, society and economics. The media obeys that old rule of journalism: ‘If it bleeds, it leads.’ Isolated valley communities that knew relatively little about what was happening in their country now read about rapes and HIV, about youth gangs and desecration of temples, about corruption and other forms of malfeasance. A citizenry brought up to expect that their basic needs would be taken care of by a responsive government started to recognise other needs they did not entirely trust it to fulfil.

With the abdication of the Fourth King, many Bhutanese felt they had lost their government, and the global attention that GNH received as a concept did not seem to relate to them. To be fair, Jigme Thinley did use GNH with great skill on the international stage. The United Nations even declared an International Happiness Day upon Bhutan’s lobbying. After all, which country would not want to say it’s working for the happiness of its people? And who can resist the lure of a country whose tourism industry asserts ‘Happiness is a place’? Best of all, such a policy would anger neither of its giant neighbours, India and China.

Unfortunately for the DPT, this internationalisation had other consequences. Bureaucrats and economists wanted measurable indicators, and the four basic principles enunciated by the Fourth King were translated into ‘nine domains meant to be measurement baskets and 72 variables that have been the basis of a nationwide GNH survey’ undertaken in 2010. For ordinary Bhutanese, mostly poor farmers, this was gibberish, not governance. It did not help the DPT that the speaker of parliament and home minister were convicted on corruption charges just before the elections. A balance-of-payments crisis led to banks refusing to lend money, and the Bhutanese currency, the ngultrum, ended up being traded at six for every five rupees at the Indian border, despite being officially pegged to the rupee at equal value. And then, just a week before the polls, India mysteriously allowed its subsidy for LPG and kerosene to lapse, resulting in steep price hikes in Bhutan.

It was in such an adverse political climate that the DPT lost the country’s second general election held on 13 July 2013 to the People’s Democratic Party (PDP). There is already speculation over what will happen to the GNH idea, but such talk focuses on the superficial at the expense of the momentous. Bhutan has successfully held two elections, peacefully voting out its first elected government.

No other country in this age of revolution and rage can lay claim to such a resoundingly successful democratic transition. In any election, the basic issue is: ‘Are you happy with this government? If not, choose one that will make you happier.’ The pursuit of happiness is now up to Bhutan’s citizens. Democratisation was meant to ensure specifically that outcome.

The happiness of its population will remain the country’s central goal, however formulated by whichever government. Bhutan has only to glance around its neighbourhood to see the alternative.

To the north is Tibet, where more than 120 people have immolated themselves over the past two-and-a-half years to protest State repression. To the south is Assam, where the Indian Government has been force-feeding Irom Sharmila for more than a dozen years as she fasts against atrocities committed under the shadow of the Armed Forces Special Powers Act. To the west of Bhutan is Sikkim, which used to be an independent kingdom before India, under the pretext of ensuring democracy and stability, merged this Himalayan Buddhist kingdom with itself. Further west is Nepal, which has seen civil war, regicide and a great deal of violence in the last few decades.

Bhutan shines in comparison. The truth is that making the happiness of its people top priority has never been just a piece of esoteric philosophy for Thimpu. Rather, it is a key aspect of national security that no Bhutanese government can ignore, whatever it chooses to call it.