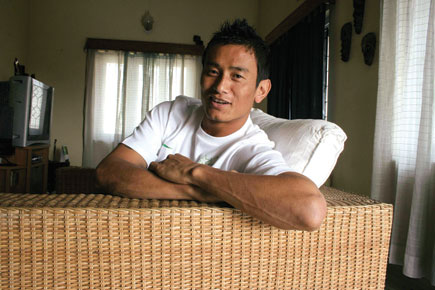 
Today, descendants of this ancient lineage termed Haplogroup D can be found in Southeast Asia and the Andaman Islands. Around 40 percent of the men in Japan are descended from this lineage, as are a large number of Tibetan men. Descendants are likely to be found in India along the Himalayan belt.

Skeletal and archaeological evidence suggests that anatomically modern humans evolved in Africa around 200,000 years ago, and began moving out of Africa to colonise the the world around 60,000 years ago.

The man who gave rise to the first genetic marker in this lineage probably lived in northeast Africa some 31,000 to 79,000 years ago. Scientists put the most likely date for when he lived at around 50,000 years ago.

According to the NGP sub-Saharan populations living today are characterised by one of three distinct Y-chromosome branches on the human tree. This lineage falls under one of these ancient branches and is referred to by geneticists as YAP. It is the most common of the three ancient genetic branches found in sub-Saharan Africa. It is characterised by a mutational event known as an Alu insertion, a 300-nucleotide fragment of DNA which, on rare occasion, gets inserted into different parts of the human genome during cell replication. Over time this lineage split into two distinct groups. One is found primarily in Africa and the Mediterranean and is defined by marker M96. The other group is found in Asia and defined by the M174 mutation.

This lineage in all likelihood would have been part of the first major wave of migration out of Africa that followed the coastal route to India and onwards to East Asia. Taking advantage of the plentiful seaside resources, these early migrants followed the coastline of Africa through the southern Arabian Peninsula, India, Sri Lanka, and Southeast Asia.

People from this lineage still live along this ancient route, particularly in Southeast Asia and the Andaman Islands. Current distribution also suggests two later migrations. The first carried along the East Asian coast into Japan and a more recent migration, taking place within the last several thousand years, brought descendants of this lineage into Tibet from Mongolia.

Clearly, the genetic data supports the claims of Bhutias, who inhabit large parts of the Himalayan areas of India including Sikkim, that their origins lie in Tibet.